Canada reopening more slowly than US

By RENA LI in Toronto | chinadaily.com.cn 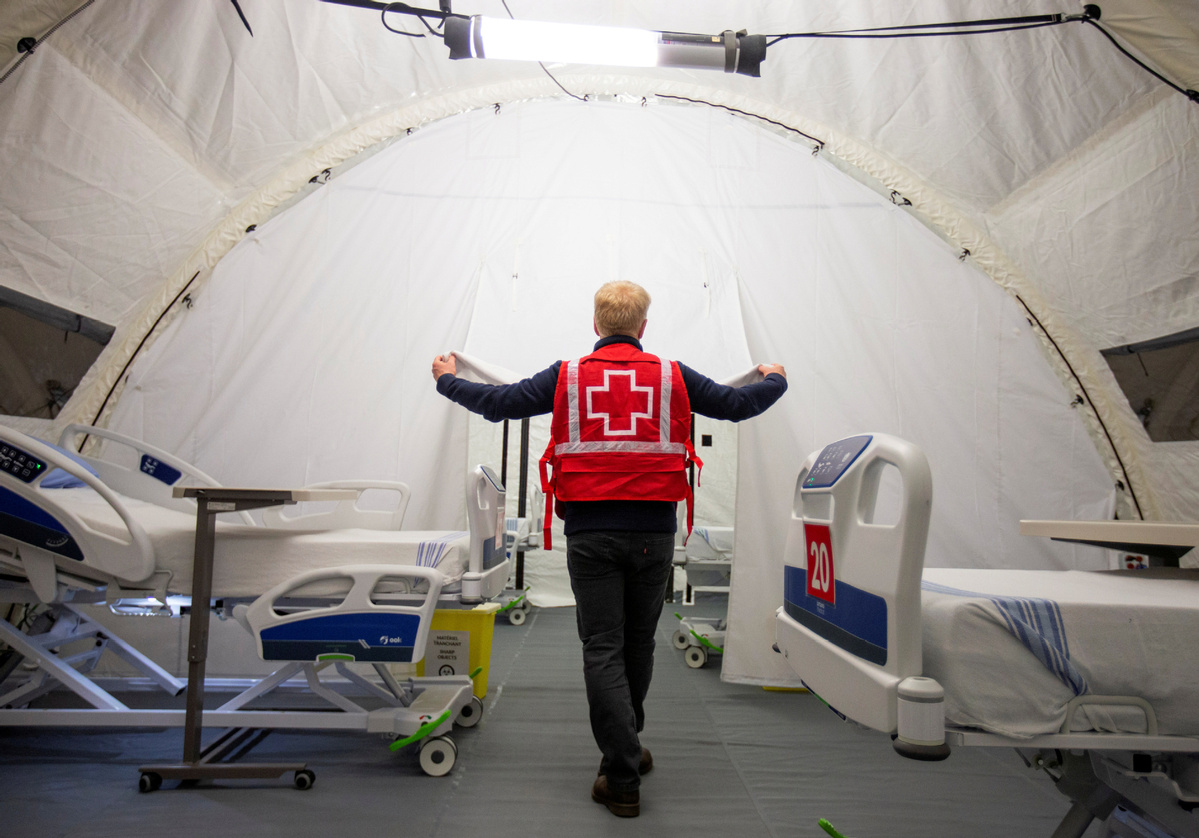 A volunteer with the Red Cross shows a doorway between beds in a mobile hospital set up in partnership with the Canadian Red Cross in the Jacques-Lemaire Arena to help care for patients with the coronavirus disease (COVID-19) from long-term centres (CHSLDs), in Montreal, Quebec, Canada April 26, 2020. (Photo: Agencies)

As the United States moves to reopen large parts of its economy amid the COVID-19 pandemic, Canada seems to be taking a go-slow approach to restarting.

Prime Minister Justin Trudeau extended a federal wage subsidy program through June, stressing that it is a "well-established principle" in Canada that no one should be asked to work in unsafe conditions.

"We're going to be very careful to ensure that we're doing what we need to do right across the country," Trudeau said last Friday, "to ensure the safety of the people who are working to provide for the rest of us."

However, with 2 million Canadians out of work last month — a 13 percent jobless rate — provinces across Canada are preparing to reopen businesses, though still with some strict public health measures in place.

In the province of Ontario, the daily number of new COVID-19 cases reported continues to fall. Some select retail stores reopened last weekend, though restrictions on the public's mobility will remain in place until May 19.

But the biggest challenge is the Canada-US border.

US President Donald Trump had previously suggested that travel restrictions could be lifted by mid-April, one month after the two countries negotiated a mutual ban on nonessential travel.

The restrictions remain in place, even as traffic over the border starts to increase, as businesses on both sides begin to reopen.

"More business activity means the federal government needs to do even more at the borders to keep Canadians safe and well," said Deputy Prime Minister Chrystia Freeland, adding that discussions are ongoing between the two countries about when and how to begin easing the ban.

Asked about the two countries' different approaches, Freeland said the same "sensible, prudent, smart" approach Canada has taken needs to guide the restart, and the biggest mistake would be to "squander our hard-won gains".

Ontario Premier Doug Ford said that he doesn't want the border with the US to reopen too soon.

"I was adamant on the call with the premiers and the prime minister; I do not want those borders open," Ford said at a news conference Friday.

According to Ford, screening for the virus at airports and border crossings needs to increase "tenfold" once the restrictions are lifted.

Ontario shares land borders with Minnesota, Michigan and New York, which is the state hit hardest by the COVID-19 pandemic.

Canada's Chief Public Health Officer Theresa Tam also urged caution in reopening the border with the US. Tam said Tuesday that as long as the US is still trying to "manage outbreaks", there is "risk to Canada from that perspective".

With the border deal with US set to expire May 21, Trudeau was asked repeatedly during his daily news briefing Tuesday whether the ban will be extended once again.

"We're going to be very, very careful about reopening any international travel, including in the United States, before we feel that it is time," he said, adding that preventing transmission from outside Canada is an essential part of ensuring that "we don't fall back into a second wave that could be as serious as this wave we're going through".

Experts have warned that Canada is going to be "tougher" at the border than the US is willing to be.

"As the US loosens up, if there are outbreaks near Canadian borders, then Canada has got to be careful about the traffic it lets go back and forth, whether that be healthcare workers in Windsor or Niagara Falls that go back and forth, or otherwise," Matthew Lebo, a political scientist at Western University, told Canadian media.

Canada and the US enjoy the largest trading relationship in the world. Before the coronavirus outbreak, about 200,000 people crossed the border each day.