OTTAWA, June 6 (Xinhua) -- Archbishop of the Archdiocese of Toronto Thomas Collins said Sunday that the comments by Canadian Prime Minister Justin Trudeau about the Catholic Church's involvement in the residential school system were unfair. 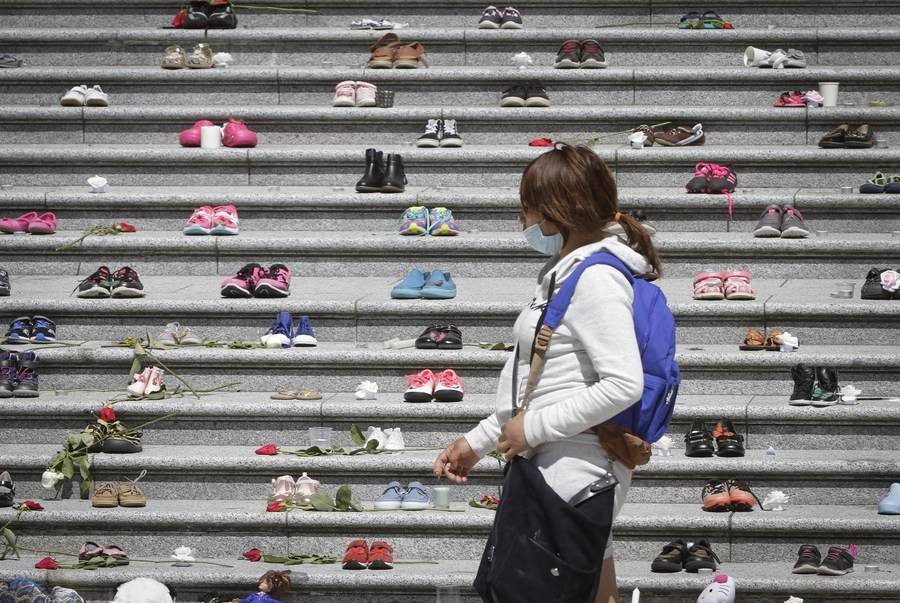 Children's shoes are placed on the staircase outside Vancouver Art Gallery during a memorial event for the 215 children whose remains have been found buried at a former Kamloops residential school in Vancouver, British Columbia, Canada, May 29, 2021.(Photo by Liang Sen/Xinhua)

"I think it's much more helpful, as we're all working on this long journey of reconciliation to work together, not to be making these kinds of unfair attacks upon those who are trying their best to bring about and to work with all the indigenous people for reconciliation," the archbishop told CTV on Sunday.

On May 28, Canada's Tk'emlups te Secwepemc First Nation announced the discovery of the remains of 215 indigenous children buried in a former indigenous residential school in Kamloops city. The school was operated by the Catholic Church from 1890 to 1969.

The announcement has sparked nationwide outrage and grief in Canada and has led to mounting calls for the Trudeau government and the Catholic Church to investigate more potential school burial sites.

Trudeau urged the Catholic Church last Friday to "take responsibility for its role in the residential school system." "As a Catholic, I am deeply disappointed by the decision that the Catholic Church has taken now and over the past many years," Trudeau told reporters on Friday.

However, Collin said he thinks "it might also be good for the government to realize they're asking us to improve the way we're responding to this great tragedy."

"We're trying, we're making great progress, but we've got a long way to go always. I think the prime minister should look to his own government. They also have many things to do," he added.

"The Indigenous people, the bishops and the whole Church in Canada have been working together on a pathway of reconciliation," Collin noted.

He agreed that any Catholic organization should release all records they have and said that the church doesn't have anything to hide. "To suggest that the Catholic Church or the bishops or the Vatican or somebody is trying to hide documents is just unfair."

While the Pope did not apologize on Sunday, Collins said an apology "may very well be something that will be on the path ahead."

Early on Sunday, Pope Francis said he was pained by the news about the former school for the indigenous students and called for respect for the rights and cultures of the indigenous. But he stopped short of a direct apology that some Canadians had demanded.

"We're all pained and saddened. Who isn't? This is a worldwide travesty," Bobby Cameron, chief of the Federation of Sovereign Indigenous Nations in Saskatchewan.

Between 1831 and 1996, Canada's residential school system forcibly separated about 150,000 children from their homes, with many subjected to abuse, rape and malnutrition. Most schools were run by the Catholic Church and the Canadian government.