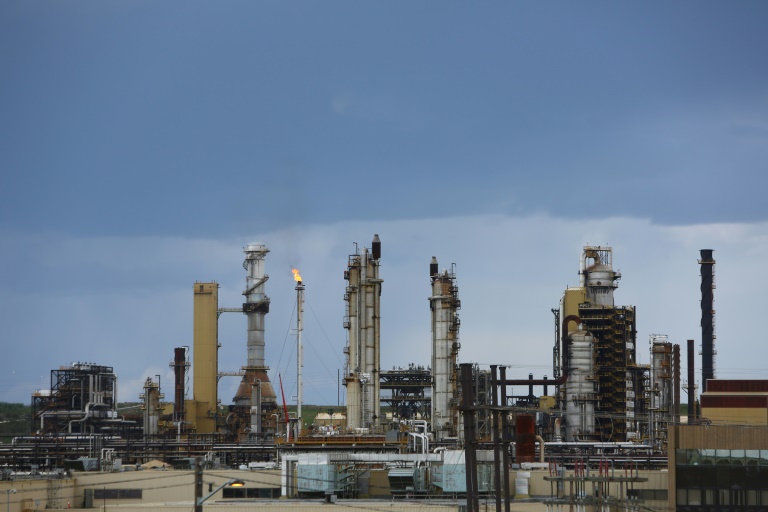 An oil sands mine in Alberta. The Canadian province's leaders had welcomed Teck's planned project but environmentalists had denounced its impact on the environment. (Photo: AFP)

Canada's Teck Resources said Sunday it had withdrawn its application to develop a giant oil sands mine in western Alberta, a controversial project which the federal government had been set to vote on this week.

The Frontier project would have cost about Can$20 billion ($15 billion) and had been expected to produce 260,000 barrels of oil per day.

But its impact on the environment had been denounced by environmentalists and the region's indigenous population: mine production would have generated 4.1 million tonnes of carbon dioxide a year, according to a study by the Impact Assessment Agency of Canada.

The Vancouver-based natural resources company said in a press release it had sent a letter to the environment minister explaining its decision.

"We are disappointed to have arrived at this point," said Teck CEO Don Lindsay in his letter to the government.

"Teck put forward a socially and environmentally responsible project that was industry leading and had the potential to create significant benefits for Canadians," he wrote, adding his company sought to balance economic development with environmental respect.

"This does not yet exist here today and, unfortunately, the growing debate around this issue has placed Frontier and our company squarely at the nexus of much broader issues that need to be resolved," Lindsay said.

"In that context, it is now evident that there is no constructive path forward for the project."

Environment Minister Jonathan Wilkinson and Natural Resources Minister Seamus O'Regan said they appreciated that Teck had made a "difficult decision."

"A strong economy and clean environment must go hand in hand. As Teck has rightly pointed out, and as many in the industry know, global investors and consumers are increasingly looking for the cleanest products available and sustainable resource development," they said in a joint statement.

"We agree with Teck and leading industry groups that all orders of government need a real plan for climate action now and to reach a net zero economy by 2050."

Leaders of oil-producing Alberta province had considered the Frontier project essential for the region's growth and employment.

A decision would, however, have been particularly delicate for Prime Minister Justin Trudeau, who when he was reelected in 2019 had pledged to make Canada carbon-neutral by 2050.

Canada is currently gripped by indigenous protests that have blocked rail lines for more than two weeks to oppose a natural gas pipeline being built across indigenous lands in British Columbia.