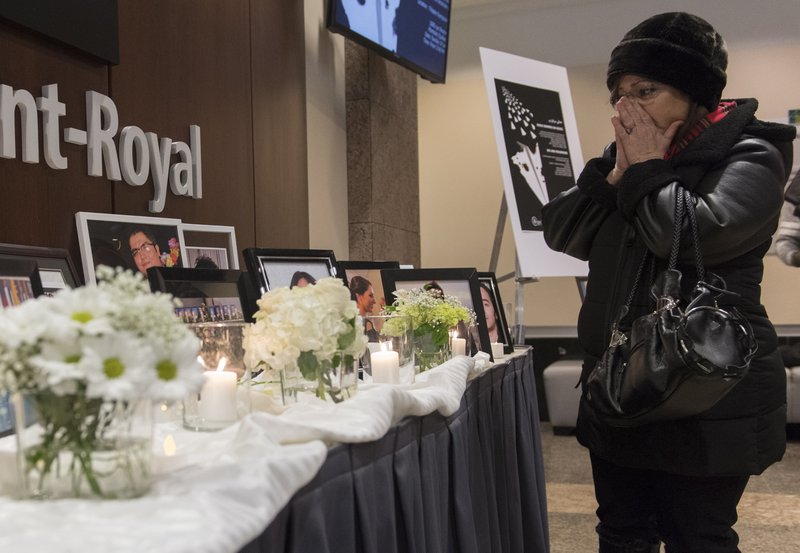 A woman pauses at a memorial prior to a ceremony in Montreal, Sunday, Jan. 19, 2020, to remember those who lost their lives in a Ukraine airplane crash in Iran on Jan. 8. (Photo: AP)

Canada’s Transportation Safety Board said Thursday it has been invited by Iran to participate in the download and analysis of the flight recorders from the downing of a Ukraine International Airlines jet “whenever and wherever” that takes place.

Iran has acknowledged that its armed forces fired two Russian anti-aircraft missiles at the jetliner that crashed after taking off from Tehran’s main airport earlier this month, killing all 176 people on board. Fifty-seven Canadians died and 138 of the passengers were headed to Canada.

The Transportation Safety Board said in a statement it understands that the plane’s flight-data recorders — commonly known as black boxes — are still in Iran and said Iran is assessing options for their download and analysis, including doing it in Iran.

Iranian officials have offered contradictory remarks on whether they’ll send the plane’s flight data and cockpit voice recorders abroad to be analyzed. A preliminary report by the Civil Aviation Organization said Iranian officials had asked French and American authorities to send them “up-to-date equipment” to pull the data in Iran.

Canada’s Transportation Safety Board said it will deploy a second team of investigators to examine the recorders whenever and wherever that activity takes place.

Two other Canadian safety board investigators are heading back to Canada after six days in Tehran and two in Kyiv. The investigators are still seeking a bigger role in the probe, but the TSB says the Iranian authorities have been co-operative and helpful.

Iran may be hesitant to turn over the recorders for fear that more details from the crash — including the harrowing 20 seconds between when the first and second surface-to-air missiles hit the plane — will come to light.

The government of Canada has said the boxes should be sent quickly for analysis by experts in either France of Ukraine.

The Guard’s air defenses shot the plane down shortly after it took off from Tehran on Jan. 8. Hours earlier, the Guard had launched ballistic missiles at US troops in Iraq in response to the US airstrike that killed Iran’s top general in Baghdad. Officials say lower-level officers mistook the plane for a US cruise missile.

Iranian officials initially said the crash was caused by a technical problem and invited countries that lost citizens to help investigate. Three days later, Iran admitted responsibility after Western leaders said there was strong evidence the plane was hit by a surface-to-air missile.

The victims also included 11 Ukrainians, 17 people from Sweden, four Afghans and four British citizens. Most of those killed were Iranians. The other five nations have demanded Iran accept full responsibility and pay compensation to the victims’ families.

The plane was a Boeing 737-800 that was designed and built in the US The plane’s engine was designed by CFM International, a joint company between French group Safran and US group GE Aviation. Investigators from both countries have been invited to take part in the probe.