OTTAWA, Aug. 12 (Xinhua) -- Canada is suffering a fourth wave of the COVID-19 pandemic as variants of the virus continue to spread in the country, said Canada's Chief Public Health Officer Theresa Tam on Thursday.

Tam told a press conference that the country's national case count has taken a turn for the worse since late July. 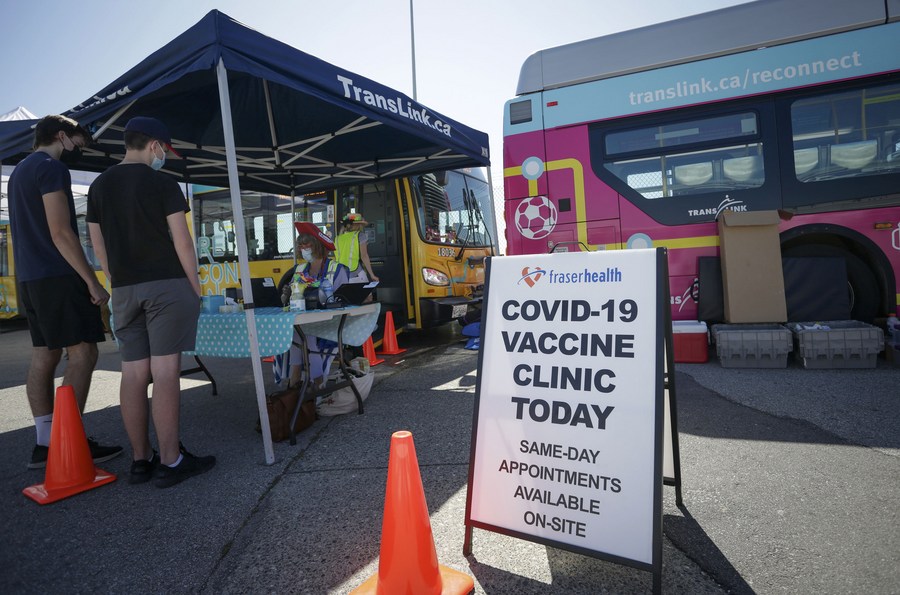 People register to get vaccinated in front of "vaccine buses" at Tsawwassen Ferry Terminal in Delta, British Columbia, Canada, on July 30, 2021. (Photo by Liang Sen/Xinhua)

Ontario, the most populous province of Canada, logged 513 new cases on Thursday, the first time over 500 cases since mid-June. The last time Ontario reported more than 500 cases of COVID-19 in a single day was on June 13, when 530 cases were identified.

"We have been closely monitoring increases in COVID-19 activity across the country. The latest national surveillance data indicate that a fourth wave is underway in Canada and that cases are plotting along a strong resurgence trajectory," she said.

There are currently more than 13,000 active cases in Canada, more than double the number from late July. Tam said that 1,500 new cases are being reported daily and the majority are among those aged 20 to 39.

"Fortunately, the number of deaths remains low, with an average of seven deaths being reported daily," she said.

To reduce the impact the fourth wave could have on the healthcare system or in jeopardizing back-to-school plans, she urged more Canadians to roll up their sleeve to get vaccinated.