OTTAWA, Nov. 12 (Xinhua) -- Canada is taking a sector-by-sector approach as it pursues a free-trade deal with China, the country's senior officials told Canadian reporters in a teleconference from Beijing where they attended the first meeting of the Canada-China Economic and Financial Strategic Dialogue. 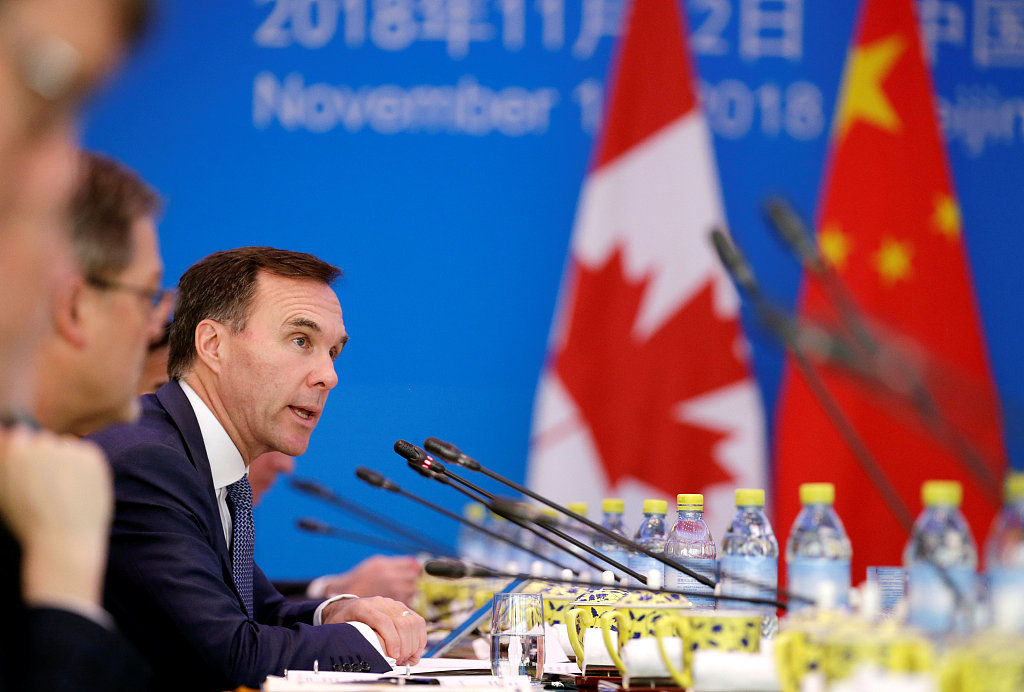 "What we found over the last couple of days was a warm, collegial atmosphere that enabled us to have some discussions, not only on how we can continue to have exploratory talks on a comprehensive trade agreement, but more specifically on how we can take real action steps in some sectors where we see opportunity," Finance Minister Bill Morneau said.

Morneau also highlighted that progress has been made in bilateral arrangements in the agricultural, energy and financial services sectors.

He credited his colleague, Agriculture and Agri-Food Minister Lawrence MacAulay, who is also in China on a 15-day trade mission and who last week led a delegation of more than 600 federal ministers, provincial premiers and business people to the inaugural China International Import Expo in Shanghai.

The Canadian delegation has inked with China bilateral agreements worth 1.67 billion Canadian dollars (1.3 billion U.S. dollars), many of which involving agriculture.

Last month, John McCallum, the Canadian ambassador to China, told CBC (Canadian Broadcasting Corp.) News that both countries enjoy broad areas for cooperation, as is shown by their consensus on wages and gender employment equity, which is likely to bring more trade agreements.

Minister of International Trade Diversification Jim Carr said in the Monday conference call with journalists that trade is "continuous" and "not a single event," and that "there is a mutual interest among Chinese ministers and those of us here from Canada to look at ways in which we can use trading relationships to create jobs for Canadians."

He said that bilateral relations have flourished on the basis of mutual respect, adding that in two years' time, the two countries will celebrate the 50th anniversary of diplomatic ties -- one of the first between a Western country and the People's Republic of China.