Canada, US in 'extremely intense' talks on NAFTA: Canadian FM

Canada and the United States are in "extremely intense" talks to reach a deal on the North American Free Trade Agreement (NAFTA) ahead of a Friday deadline set by US President Donald Trump. 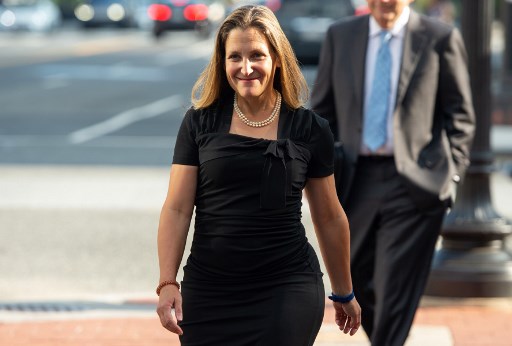 Canadian Foreign Minister Chrystia Freeland arrives for trade talks at the office of the US Trade Representative in Washington, DC, August 29, 2018. (Photo: AFP)

Canadian Minister of Foreign Affairs Chrystia Freeland said in Washington on Wednesday that officials from both sides are working on some remaining sensitive bilateral disputes, according to the Canadian Broadcasting Corporation.

Trump announced Monday that the US and Mexico had reached a preliminary bilateral trade pact that would replace NAFTA and that Canada should join the deal or face tariffs against Canada's automobile manufacturing industry.

The Friday deadline is probably a good thing insofar as it has Canada at the table again, said John Ries, an international trade expert from the University of British Columbia.

"Both sides have known what the issues are and what each side is proposing, but they haven't really sat down and worked really hard at coming up with compromises," Ries told Xinhua on Wednesday. "This is creating a lot of focus to really resolve issues that they've known about and they're not going to get resolved by not talking."

It remains to be seen if the Friday deadline is a hard one, said Canadian Prime Minister Justin Trudeau during a visit to northern Ontario on Wednesday.

"I understand that the Americans and the Mexicans very much want to try to get things done by Friday and we're seeing if we can get to the right place by Friday," Trudeau said. "But as I've said all along, it has to be the right deal for Canada and that's what we're staying firm on."

Canada still has the bargaining power, said Ries, because it appears that US lawmakers and Mexico are pushing for a tri-lateral deal and that could limit Trump's ability to single-handedly control NAFTA's fate.

Trudeau's Liberal government, according to media reports on Wednesday, would be willing to give the US more access to its supply-managed dairy industry, one of the main sticking points in the negotiations.

The US and Canada are still working through several issues, including wages and country-of-origin details in the auto manufacturing industry, intellectual property right protection, dispute settlement mechanisms and duty-free limits for cross-border shopping.

"The US does have the advantage of being the big lucrative market," Ries said. "I think they are playing that to their advantage."