Hungarian police have detained the captain of a cruise ship that collided with a sightseeing boat packed with South Korean tourists, causing it to sink quickly in the Danube River, as loved ones of the missing and dead were expected to arrive Friday in Budapest. 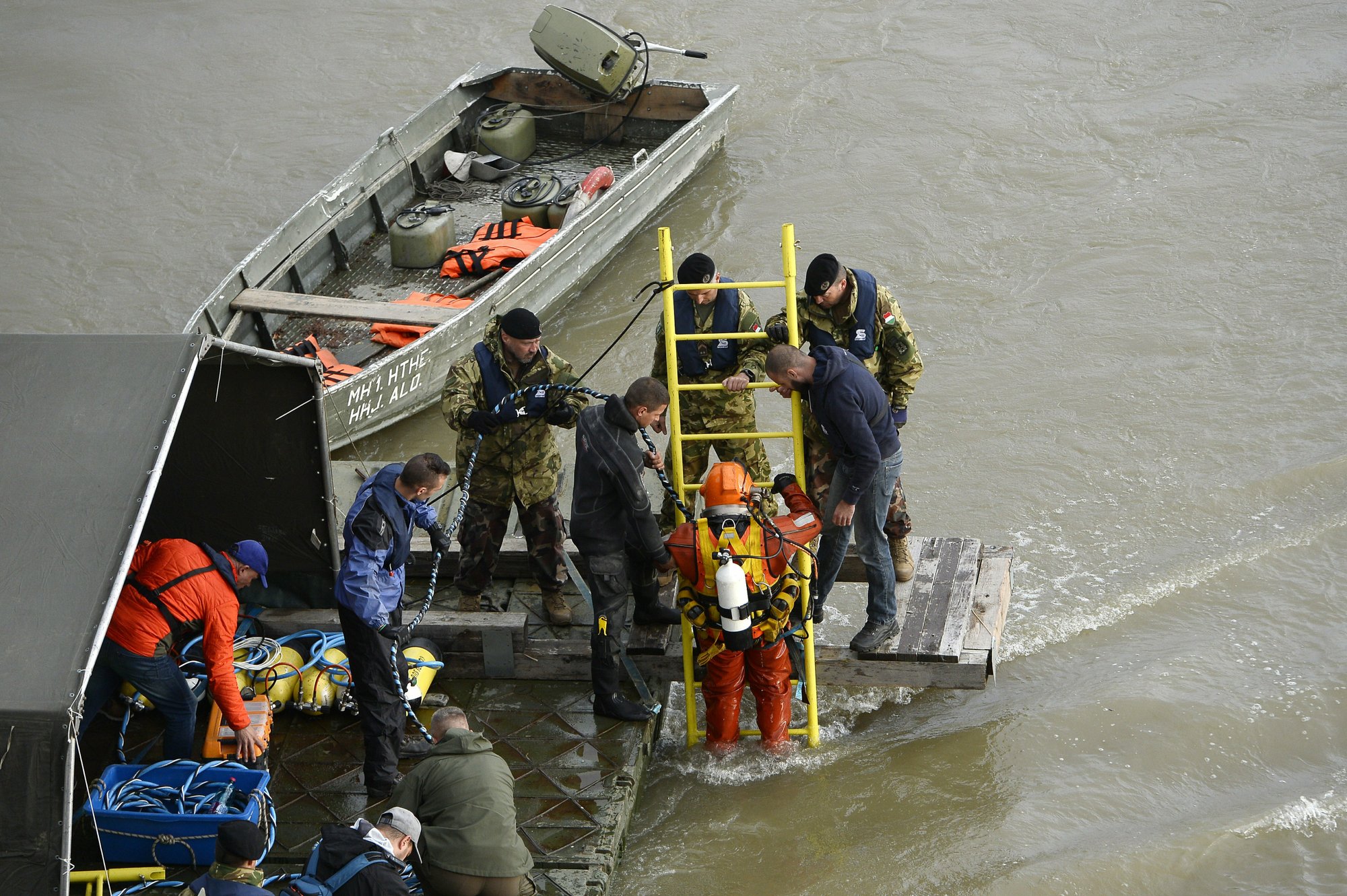 A diver descends a ladder to dive to the wreckage as rescuers work to prepare the recovery of the capsized boat under Margaret Bridge in Budapest, Hungary, Thursday, May 30, 2019, after a sightseeing boat carrying 33 South Korean tourists collided with a large river cruise ship on River Danube near the bridge the night before. (Photo: AP)

Seven people are confirmed dead and seven have been rescued, while 21 people remain missing in the waters.

A South Korean group on a package tour of Europe — including 30 tourists, two guides and a photographer— were on an hour-long sightseeing tour of Budapest when their boat collided with a Viking cruise ship during a downpour Wednesday evening.

The boat's sinking has touched a nerve in South Korea, where many are still traumatized over a 2014 ferry sinking that killed more than 300 people, mostly students.

Survivors have given accounts saying they were lucky to grab onto a drifting lifeboat Wednesday evening while looking in horror as others around them struggled in the dark, rainy waters, shouting for help.

Their small sightseeing boat had almost finished its tour and was almost at a stop when the larger cruise ship hit it under a bridge near the riverbank parliament building, a city landmark. They said about 20 people were on the deck taking photographs or preparing to disembark. The others were in the cabin.

"I saw that big cruise ship coming closer to us but I had never imagined it would ram our boat," said a 31-year-old South Korean surnamed Jeong. She was quoted by South Korea's Yonhap news agency.

Jeong said she and others on the deck were thrown into the cold Danube waters by the impact of the collision. Police said it took only seven seconds for the boat to overturn and sink.

She said she saw a lifeboat drifting close by and managed to seize hold of it, also throwing a rope to another tourist surnamed Yoon.

"Our boat was turned over in an instant and began sinking," Yoon, 32, told Yonhap. "All those on the deck fell into water and I think those staying in the cabin on the first floor couldn't probably get out of the ship swiftly."

Rescue crews were looking for the missing people, but operations have been hampered by the rain and the fast flow of the rising Danube. The search for the 21 missing extended far downstream, even into Serbia, where the Danube goes after leaving Hungary.

Meanwhile, crews also prepared to raise the sunken boat. Officials have said that due to heavy currents it could take days to recover the 70-year-old boat, which was built in the former Soviet Union.

Police, who launched a criminal investigation into the incident, said late Thursday that they had detained and questioned the Ukrainian captain of the larger vessel.

The 64-year-old man is suspected of endangering water transport leading to a deadly mass accident. In line with Hungarian laws, the suspect was identified only as Yuriy C., referencing his first name and the initial letter of his last name. Police proposed the arrest of the Odessa resident, described earlier by police as an experienced sailor.

Video released by Hungarian police showed the sightseeing boat, identified as the Hableany (Mermaid), traveling closely side-by-side and in the same direction as a German-built Viking cruise ship as they approached the Margit Bridge.

The Hableany then appeared to steer slightly to its left, into the path of the 135-meter (443-feet) long cruise ship, which continued to sail on at the same speed. The two collided and the sightseeing boat was then seen tipping on its side between the bridge's two supports.

Police Col. Adrian Pal said it was unclear what caused the Hableany to steer into the path of the Viking.

The South Korean government said none of those on board was wearing a life jacket.