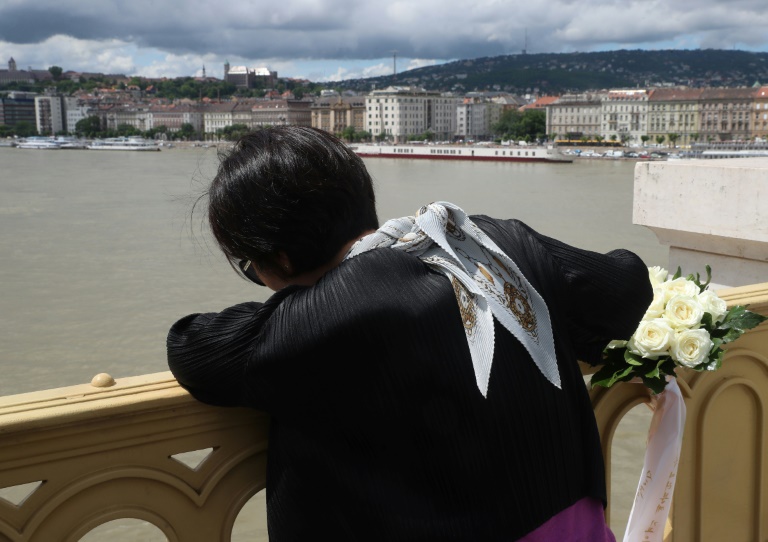 Seven South Korean tourists are known to have been killed and 21 people remain missing. (Photo: AFP)

The captain of a river cruise ship that collided with a smaller sightseeing vessel was charged Saturday over the accident in Budapest that killed seven South Korean tourists and left 21 missing.

The Mermaid carrying mainly South Korean tourists overturned and sank late Wednesday, seconds after colliding with the Viking Sigyn cruise on a busy stretch of the Danube in the heart of Budapest.

Strong currents have hampered the search for those missing -- 19 South Koreans and two Hungarians -- preventing divers from reaching the submerged boat.

The 64-year-old was detained Thursday for questioning for "endangering waterborne traffic resulting in multiple deaths", police said at the time.

The captain's lawyer, Balazs Toth, said the court had granted bail, but prosecutors were appealing it so his client remained detained.

"My client has not changed his statement made as a witness. He insists that he has not made any error," his other lawyer, Gabor Elo, told reporters after the hearing.

Near the accident site, a floating crane has been erected, as well as a small pier for use by divers.

But with the Danube swollen after weeks of rain, the strong current has complicated plans to lift the wreck, and the prospects of finding any more survivors are seen as very slim.

Serbia, Romania and Croatia -- countries along the Danube, south of Hungary -- have also been asked to help in the search after South Korean Foreign Minister Kang Kyung-wha insisted in Budapest on Friday that her country would not give up hope of finding survivors.

One of the bodies was found around 11 kilometres (seven miles) downstream of the accident site.

South Korean relatives of those on the Mermaid arrived in Budapest Friday, and officials took them to the banks of the Danube to where the accident happened.

People have been laying flowers along the river bank and on a bridge above the spot where the collision took place, as well as at the South Korean embassy.

On Saturday, black flags were flying along the bridge.

Only seven people are known to have survived so far. Those missing include a six-year-old girl, as well as the Mermaid's Hungarian captain and a crew member.

The collision happened on a popular part of the river, from where sightseers can view the city and parliament, which is lit up at night.

Larger river cruise boats travelling on the Danube between Germany and the Black Sea typically spend several days moored in the capital.