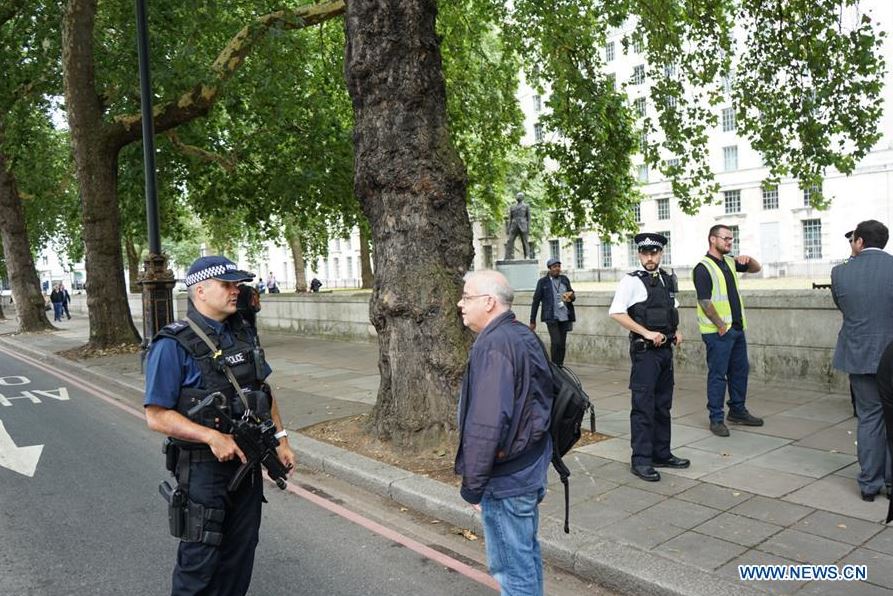 LONDON, Aug. 14 (Xinhua) -- A man has been arrested on suspicion of terrorism offences after a car crashed into barriers outside Britain's Houses of Parliament, local Police said on Tuesday.

At 7:37 a.m. local time (0637 GMT), a car was in collision with barriers outside the Houses of Parliament, and the male driver, in his late 20s, of the vehicle was detained by officers at the scene, according to Britain's Metropolitan Police.

There was nobody else in the vehicle, which remained at the scene and was searched. No weapons have been recovered so far, police said.

At this stage, we are treating this as a terrorist incident and the Metropolitan Police's Counter Terrorism Command is now leading the investigation, according to a statement from the police.

A number of people were injured as a result of the collision and have been taken to hospital. By far none of the injuries appeared to be life-threatening.

London Ambulance Service said it had treated three people at the scene for injuries.

The Government will hold a meeting of its emergency COBRA committee later today to discuss the crash outside parliament, Sky news reported.

The response of Londoners today "shows that we will never be cowed, intimidated or divided by any terrorist attack", London Mayor Sadiq Khan says in a statement.

In March last year, a terrorist attack took place outside the Palace of Westminster in London, seat of the British Parliament.

A man drove a car into pedestrians on the pavement along the south side of Westminster Bridge and Bridge Street. He then crashed the car into the perimeter fence of the Palace grounds and ran into New Palace Yard, where he fatally stabbed an unarmed police officer. Six people died, including the attacker, and at least 50 people were injured in the attack.