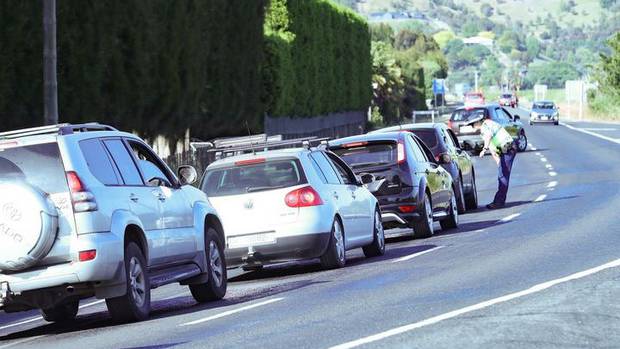 Police talk to motorists after a fatal accident in Hawke's Bay. (Photo: NZME）

WELLINGTON, Dec. 8 (Xinhua) -- A total of 12 people have died in car crashes across New Zealand since Friday, according to the New Zealand Police.

On Sunday, three incidents took three lives. A person died on Wainui Rd near Whakatane, Bay of Plenty at 5:15 a.m. local time Sunday after their vehicle rolled. A motorcyclist died on Broadlands Rd, Reporoa, near Rotorua, after a crash at 1:30 p.m. also on Sunday.

A child was killed after being hit by a car just before 3 p.m. in a driveway on Hams Rd, in rural Waikato.

On Saturday, Two people died in a car after it was struck by a train at the intersection of Piako Rd and State Highway 26 at 4:10 a.m. local time.

A pedestrian was fatally struck by a train in South Auckland also on Saturday. The crash happened at 12:30 a.m. local time.

A family of five was on holiday in New Zealand when their vehicle collided with a truck on State Highway 1 between Station and Kiwa roads at Hapuku, in South Island at about 3:15 p.m. on Friday. Three people died at the scene and a fourth person was announced dead on Sunday.

One people died at the scene in a crash between a motorcycle and a logging truck on State Highway 5 at Te Pohue on Friday morning. A second person in the crash succumbed to injuries on Saturday evening.

The police aimed to reduce the number of deaths on the road by 5 percent annually. However, the number of road deaths have increased year-on-year by about 10 percent at this point for 2019, while speeding was the top factor causing crashes.

Over the next three years, 3,300 km of state highways and local roads will be upgraded under the government's Safe Network Program.