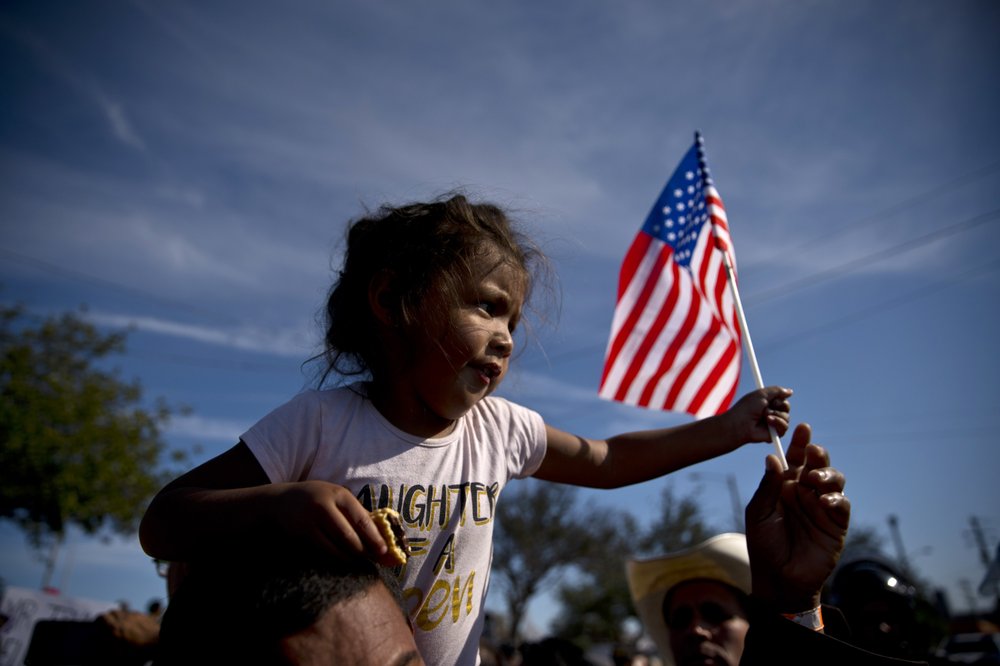 A migrant girl with a US flag sits on the shoulders of a man marching with other migrants to the Chaparral border crossing in Tijuana, Mexico, Sunday, Nov. 25, 2018, as they try to reach the US. (Photo: AP)

Many among the more than 5,000 Central American migrants in Tijuana were urgently exploring their options amid a growing feeling that they had little hope of making successful asylum bids in the United States or of crossing the border illegally.

Most were dispirited on Monday, a day after US agents fired tear gas into Mexico to turn back some migrants who had breached the border. They saw the clash and official response as hurting their chances of reaching the US.

There was a steady line outside a shelter at a tent housing the International Organization for Migration, where officials were offering assistance for those who wanted to return to their home countries.

“What happened yesterday harms all of us,” Oscar Leonel Mina, a 22-year-old father from San Salvador, El Salvador, said about Sunday’s border clash.

Mina and his wife and their toddler daughter avoided the march and were glad they did after hearing others recount what unfolded, he said as he sat in the doorway of his family’s tent at Tijuana sports complex using a toothbrush to clean the fine dust that coats everything off his sneakers.

The events made Mina rethink his family’s plan of making it to the US He says he’s heard people talk of Rosarito, a beach town popular with US tourists about a 40-minute drive south of Tijuana.

There “you can earn money and live well” if you’re willing to work, he said. He set a goal of trying to move his family out of the shelter in another week.

Mexican security forces stepped up their presence at the complex where thousands from the migrant caravan have been sheltered, apparently seeking to avoid a repeat of Sunday’s ugly scene.

Tijuana public safety secretary Marco Antonio Sotomayor Amezcua said in a news conference that Mexican police would be prudent in their use of force, but “we have to guard at all cost that the border posts are not closed again.”

Sotomayor said he hopes migrants who had thought of entering the US illegally learned from Sunday’s events that that won’t be possible.

Migrants hoping to apply for asylum in the United States must put their names on a waiting list that already had some 3,000 people on it before the caravan arrived in Tijuana. With US officials processing fewer than 100 claims a day, the wait time for the recent arrivals stands to take months.

That has instilled a sense of desperation among many after their grueling trek from Central America. Sunday’s incident began after hundreds marched to the border to try to call attention to their plight. Some attempted to get through fencing and wire separating the countries, prompting volleys of stinging gas.

Cindy Martinez of San Vicente, El Salvador, said she had been about to cross the concertina wire to the US side when the tear gas was launched. She estimated about 20 people had already passed in front of her, and parents begged agents not to unleash the gas because there were young children present.

“I see it as impossible for them to want to give us asylum,” she said. “Because of the words that President Donald Trump has said, I think this is impossible.”

Martinez, 28, said she was now considering getting work in Tijuana.

Mexico’s National Migration Institute reported that 98 migrants were being deported after trying to breach the US border. The country’s Interior Department said about 500 people attempted to rush the border, while US authorities put the number at 1,000.

Baja California state Gov. Francisco Vega said almost 9,000 migrants were in his state — mostly in Tijuana, with a smaller number in Mexicali — and called it “an issue of national security.” Vega issued a public appeal to Mexico’s federal government to take over responsibility for sheltering the migrants and deport any who break the law.

Alex Castillo carried a red bedroll slung over his shoulder as he walked away from the Tijuana shelter on Monday, saying he would head to the industrial city of Monterrey to look for work and try to cross into the United States next year.

The 35-year-old electrician from Tegucigalpa, Honduras, said he wasn’t at the border clash. He heard about it from others and decided to leave “to avoiding getting beaten.”