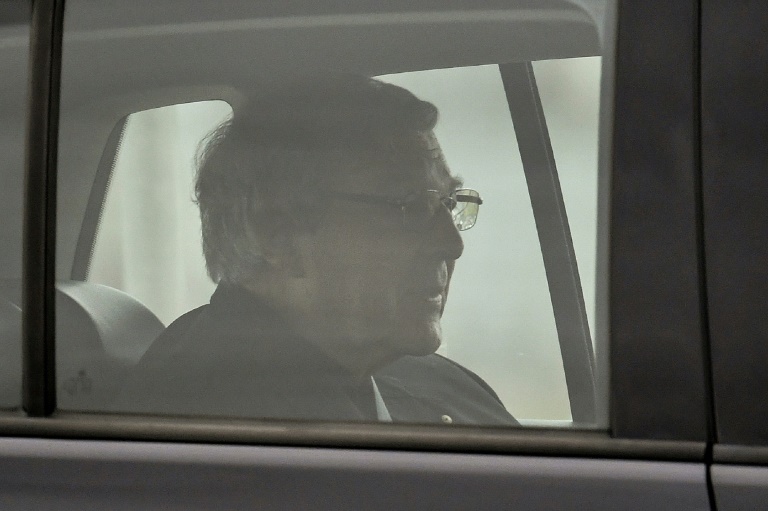 The inquiry found that Australian Cardinal George Pell was aware of child sexual abuse by clergy for decades. (Photo: AFP)

Cardinal George Pell was aware of child sexual abuse by Catholic clergy in Australia as far back as the 1970s and failed to seek the removal of accused priests, according to findings of a top-level inquiry released Thursday.

The Royal Commission report was handed down in 2017 but pages relating to Pell's conduct were heavily redacted to prevent jurors in his trials on child sex abuse allegations from being prejudiced.

Australia's High Court last month acquitted the former Vatican treasurer of all charges and freed him from jail, allowing the release of findings relating to Pell from the Royal Commission into institutional child sex abuse.

The commission found that Pell, when he was a priest in the rural diocese of Ballarat in Victoria state, had begun considering in 1973 the "prudence" of now-jailed child sex abuser Gerald Ridsdale taking boys on overnight camping trips.

"By this time, child sexual abuse was on his radar," the commission said.

"We are also satisfied that by 1973 Cardinal Pell was not only conscious of child sexual abuse by clergy but that he also had considered measures of avoiding situations which might provoke gossip about it."

The commission found it was "likely that he knew of Ridsdale's sexual transgressions" when Pell joined a meeting about moving the priest to another parish in 1977.

Pell, who lived with Ridsdale in 1973 and supported him at his first court appearance in 1993, has insisted he had no memory of claims of sustained mistreatment in Ballarat.

In a statement Thursday, Pell said he was "surprised by some of the views of the Royal Commission".

"These views are not supported by evidence," he said.

Pell added that attendees of the 1977 meeting either learned of Ridsdale's offending "much later" or did not recall the discussions.

The commission also found that Pell should have sought the removal of another priest, Father Peter Searson, after receiving a list of complaints from a delegation of teachers in 1989 when Pell was auxiliary bishop in Melbourne.

Searson was the subject of "numerous" complaints between the 1970s and 1990s including child sexual abuse and his "unpleasant, strange, aggressive and violent conduct", the commission said.

Though Pell conceded to the inquiry that he could have been "a bit more pushy" in recommending a course of action to the archbishop, the commission found it had been "incumbent on Pell" to act in 1989 but he did not stand down Searson until 1997.

In his statement Thursday, Pell said the teachers' delegation "did not mention sexual assaults and did not ask for Searson's removal".

Searson pleaded guilty in 1997 to physically assaulting a child but was never charged with sexual abuse. He died in 2009.

When the Royal Commission was announced in 2012, Pell -- then the archbishop of Sydney -- called the extent of abuse in the Catholic Church "exaggerated".

The inquiry heard that there were more than 4,000 alleged victims of paedophilia in religious institutions, and in some Catholic dioceses more than 15 percent of priests were perpetrators.

Repeatedly questioned during hearings about the Ballarat diocese in the 1970s and 80s, Pell apologised on behalf of the church and did admit he "mucked up" in dealing with paedophile priests in the 1970s.

However, he said he was deceived by senior clergy about what was happening during a time of "crimes and cover-ups".

Pell, 78, spent more than a year in prison after he was convicted in December 2018 of sexually abusing two choirboys in the 1990s when he was the archbishop of Melbourne.

He had strenuously denied the charges and was later acquitted by the High Court in a second appeal against the conviction.

However, Pell is still facing a civil suit brought by the father of one of choirboys, who died in 2014.

"In my view, his position as Australia's highest-ranking representative in the Catholic Church should be reviewed based on his choice to protect paedophiles over innocent children, at the time the abuse occurred," said Lisa Flynn, the deceased man's lawyer.

In Good Faith Foundation, an abuse recovery group, said the report showed there were "numerous opportunities" for Pell to have acted throughout his time with the Church.

"At each point he appeared to show more regard for trying to maintain a shroud of ignorance, than protecting the most vulnerable in our communities," it said in a statement.