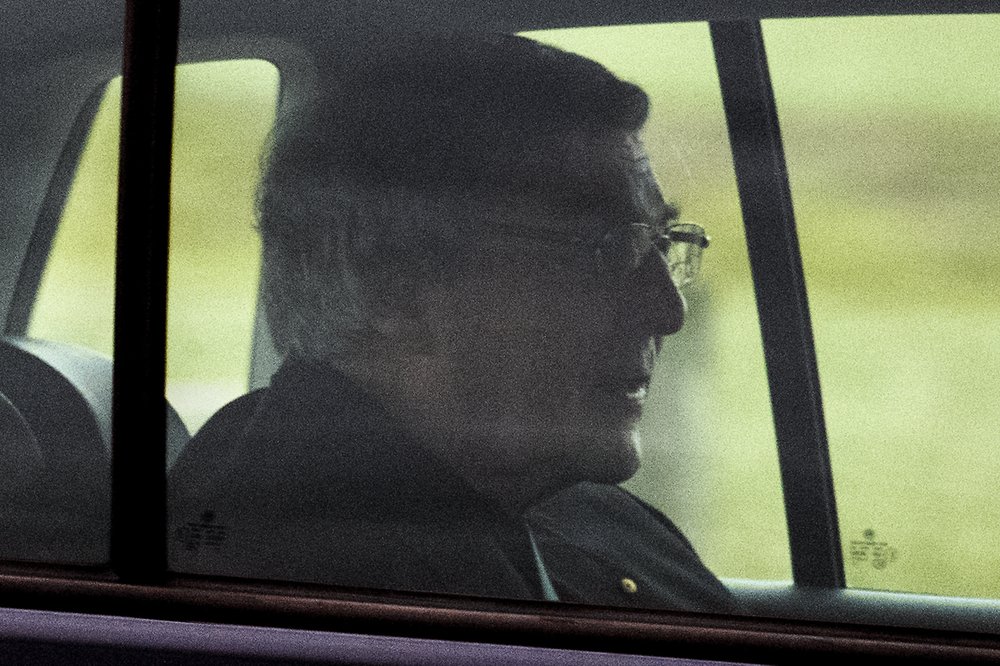 Cardinal George Pell sits in the back seat of a car as he leaves prison in Geelong, Australia Tuesday, April 7, 2020. Pope Francis' former finance minister Pell had been the most senior Catholic found guilty of sexually abusing children and has spent 13 months in high-security prisons before seven High Court judges unanimously dismissed his convictions. (Photo: AP)

Cardinal George Pell welcomed Australia’s highest court clearing him of child sex crimes Tuesday and said his trial had not been a referendum on the Catholic Church’s handling of the clergy abuse crisis.

“I have consistently maintained my innocence while suffering from a serious injustice,” Pell said in his first public statement since he was convicted in December 2018. It was released before he left prison and was taken to the Carmelite Monastery in Melbourne, where he was greeted by a nun.

The Vatican welcomed the decision, while saying it reaffirmed its commitment “to pursuing all cases of abuse against minors.”

Francis appeared to refer to Pell’s acquittal in his morning homily, saying he was praying for all those unjustly persecuted.

Pell said, “I hold no ill will toward my accuser,” a former choirboy whose testimony was at the core of the 78-year-old cleric’s prosecution.

The High Court found there was reasonable doubt surrounding the testimony of the witness, now the father of a young family aged in his 30s, who said Pell had abused him and another 13-year-old choirboy at St. Patrick’s Cathedral in Melbourne in the late 1990s.

“My trial was not a referendum on the Catholic Church; nor a referendum on how Church authorities in Australia dealt with the crime of pedophilia in the Church,” Pell said.

“The point was whether I had committed these awful crimes, and I did not,” he added.

A judge and lawyers had urged two juries in 2018 to try Pell on the evidence and not on his senior position in the church’s flawed responses to clergy abuse in Australia. The first trial ended in a jury deadlock and the second unanimously convicted him on all charges.

The Survivors’ Network of those Abused by Priests said in a statement they were “dismayed and heartbroken” by the decision.

Sydney Archbishop Anthony Fisher called for the ruling to end the pursuit of Pell in the courts.

“I am pleased that the Cardinal will now be released and I ask that the pursuit of him that brought us to this point now cease,” Fisher said in a statement.

“The cardinal’s vindication today invites broader reflection on our system of justice, our commitment to the presumption of innocence, and our treatment of high-profile figures accused of crimes,” Fisher added.

But Pell’s record on managing clergy abuse could come under further public scrutiny, with Australian Attorney General Christian Porter responding to the verdict by announcing he will consider releasing a redacted section of a report on institutional responses to child molesting.

Pell gave evidence by video link from Rome in 2016 to a royal commission, Australia’s highest level of inquiry, about his time as a church leader in Melbourne and his hometown of Ballarat.

The royal commission found in its 2017 report that the Melbourne Archdiocese had ignored or covered up allegations of child abuse by seven priests to protect the church’s reputation and avoid scandal.

The royal commission was critical of Pell’s predecessor in Melbourne, Archbishop Frank Little, who died in 2008. It made no findings against Pell, saying then that it would not publish information that could “prejudice current or future criminal or civil proceedings.”

Where Pell will go and whether he will return to Rome has not been announced. Melbourne residents have been told to stay home except for essentials due to the coronavirus pandemic. He had stayed at a Sydney seminary when he was free on bail awaiting trial.

He is no longer a member of Francis’ Council of Cardinals or a Vatican official and will lose his right to vote for the next pope on his 80th birthday next year.

The Vatican has previously said Pell would face a canonical investigation after all his appeals had been exhausted in Australia, but it is not known what effect his acquittal will have on any church investigation.

Many Australians had already accepted Pell was guilty before the High Court decision. Judge Peter Kidd had berated Pell in a nationally televised sentencing hearing last year for a breach of trust that had an element of brutality a sense of impunity.

“I see this as callus, brazen offending — blatant,” Kidd said.

St. Patrick’s College, where Pell was educated in Ballarat, removed his name from a building and from the school honor board.

But the Australian Catholic University kept its Pell Center on its Ballarat campus until the appeal process was completed, angering academic staff.

The university’s president, Greg Craven, said Pell should never have been charged.

“This was a case that always had a reasonable doubt a mile wide,” Craven said. “The High Court unanimously — seven-nil — said the Victorian justice system got it hopelessly wrong.”

Pell had been serving a six-year sentence after he was convicted of sexually assaulting the two boys in December 1996 and convicted of indecently assaulting one of the boys by painfully squeezing his genitals after a Mass in early 1997.

Pell was regarded as the Vatican’s third-highest ranking official when he voluntarily returned to Melbourne in 2017 determined to clear his name of dozens of decades-old child abuse allegations.

All the charges were dropped or dismissed over the years except the cathedral allegations.

He did not testify at either trial or at the subsequent appeals.

But the juries saw his emphatic denials in a police interview that was video recorded in a Rome airport hotel conference room in October 2016.

The complainant first went to police in 2015 after the second alleged victim died of a heroin overdose at the age of 31. Neither can be identified under state law.

Lawyers for the father of the dead man, who also cannot be identified, said the verdict left him “in utter disbelief.”

Lawyers for the complainant said he was likely to make a statement on Wednesday.

Much of the hearing at the High Court last month had focused on whether the jury should have had a reasonable doubt about Pell’s guilt and whether he could have time to molest the boys in five or six minutes immediately after a Mass.

The Victorian Court of Appeal found in a 2-1 majority in August that Pell had had enough time to abuse the boys and that the unanimous guilty verdicts were sound. But the High Court found the appeals court was incorrect.

Director of Public Prosecutions Kerri Judd told the High Court last month that the surviving choirboy’s detailed knowledge of the layout of the priests’ sacristy supported his accusation that the boys were molested there.

The High Court referred to the “unchallenged evidence” of witnesses in the trial to Pell’s practice of talking to the congregation on the cathedral stairs after Mass, church practice that required him to be accompanied in the cathedral while robed and the “continuous traffic in and out of the priests’ sacristy” as causes for reasonable doubt.

The High Court statement said, “There is a significant possibility that an innocent person has been convicted because the evidence did not establish guilt to the requisite standard of proof.”