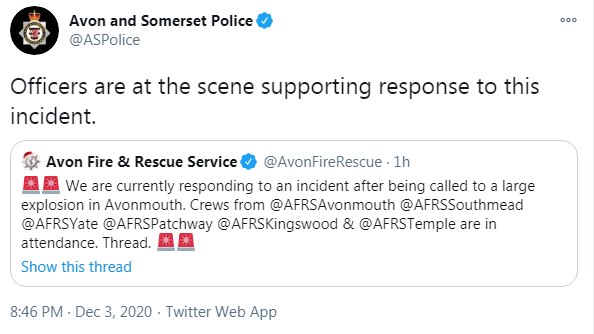 LONDON, Dec. 3 (Xinhua) -- Emergency crews are dealing with a large explosion at a warehouse in Avonmouth near the southwest England city of Bristol with casualties confirmed, local media reported Thursday.

South Western Ambulance Service said it was responding to a "serious incident". Fire crews were called at 11:20 a.m. (1120 GMT) and have confirmed there have been "casualties", according to the Bristol Post.

Police and paramedics are at the scene. A witness was quoted by the BBC as hearing a "very loud explosion" that "shook buildings".

Bristol Waste, which runs the nearby Avonmouth recycling center, said on Twitter that it had closed the site temporarily.

It currently remains unknown what caused the explosion, the Daily Express reported.