Catalan ex-leader, in Belgium, vows to keep up independence bid 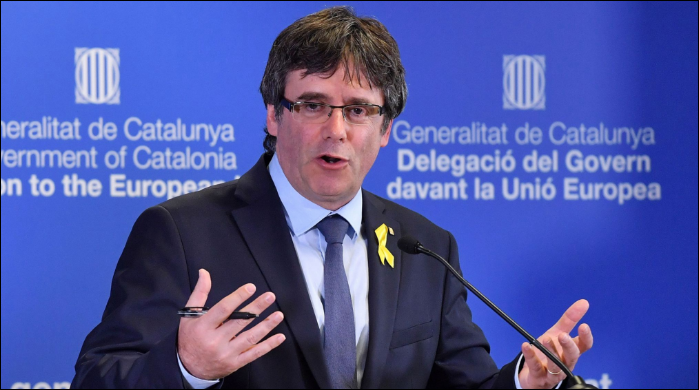 Catalonia's deposed president Carles Puigdemont vowed Saturday to "defend the just cause of the Catalan people" as he held a news conference on his return to Belgium.

Puigdemont was able to travel from Germany to Belgium, where he has a home, as he no longer risks extradition to Spain after a Spanish court dropped a European arrest warrant for him.

"This is not the end of my journey. I will travel to the last corner of our continent to defend the just cause of the Catalan people," he said.

He was joined at the news conference by his designated successor Quim Torra, who still considers him the "legitimate president" of Catalonia.

Puigdemont was to travel south of the Belgian capital later Saturday to the town of Waterloo, known for another battle – French emperor Napoleon's defeat by a mix of European forces in 1815 – for a ceremony.

The 55-year-old former regional leader intends to set up a "Republican council" at his Waterloo base to continue to fight for Catalan independence, as well as an assembly composed of local officials to work in parallel with the Catalan government.

"My political activity will be based in Belgium, of course with the aim of pursuing the mandate by the people" for an independent Catalonia, Puigdemont said in Berlin when he announced his return this week.

Sacked as Catalan president after a failed secession bid on October 27, Puigdemont and several members of his executive fled to Brussels several days later.

He was then arrested in Germany at the end of March on his return from a trip to Finland.

Puigdemont was freed on bail and a German court ruled that he could be extradited only on possible corruption charges and not for "rebellion" as sought by Madrid.

From Belgium, Puigdemont will be able to travel where he likes, except to Spain where he is still wanted for rebellion, which carries up to 25 years in jail, and for misuse of public funds.

In theory, he could remain in self-exile for 20 years, which in Spain's legal system is the time limit after which the rebellion charge would no longer be valid.

Although power is now officially in Torra's hands, Puigdemont continues to exert a strong influence in the region.

"In Brussels, we will continue... to develop activities linked to that which the people of Catalonia approved on October 1," Puigdemont said in Germany, in reference to the referendum banned by Spain's courts.

Five other leading members of the pro-independence movement are in Belgium, Switzerland and Scotland.