Similar protests, different reporting tactics. Western media, once boisterous on Hong Kong riots, is now trying to play down the Catalan protests in Spain which share many similarities with Hong Kong riots, and this serves as "ironclad evidence of their 'double standards' and deviation from real journalism," observers said. 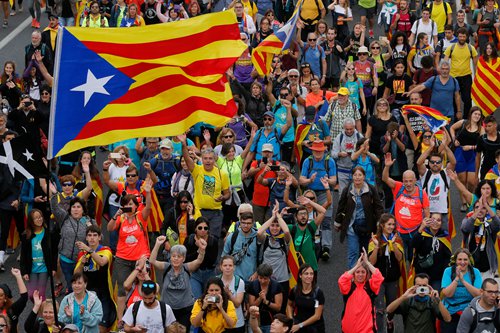 Pro-independence protesters march in San Vicenc dels Horts, on Friday, the day separatists have called a general strike and a mass rally. Catalan separatists burned barricades and clashed with police in Barcelona on Thursday. (Photo: AFP)

The Global Times reporter spotted thousands of protesters arrive in Barcelona on Friday, as unions called for a general strike. Protests have recently turned violent, with at least 33 people arrested and 46 police officers injured in a third night of violent street protests in Barcelona on Wednesday.

Many Catalan protesters chanted "We are going to do a Hong Kong" on social media and copied Hong Kong rioters' move to occupy and stifle the airport, leading to cancellation of 45 flights on Monday.

Spanish media reported that Spain's tourism will suffer from such unrest. In addition to the impact from Brexit, the tourism industry in Spain is estimated to lose up to 2 billion euro ($2.26 billion).

Roads were closed at many tourist spots.

The scene mirrors the general strike in Hong Kong at the end of July, when the city descended into total chaos: flights were canceled, major roads were blocked and ordinary people were attacked by rioters.

Although the two protests share many similarities, they were portrayed differently in Western media reports.

Catalan protests did not make many headlines. On Friday morning, on the online main pages of The Guardian, BBC and The New York Times, there was no trace of the protest or the upcoming strike. Instead, they prominently covered the battle between Mexican police and "El Chapo," a drug king.

"Western media and governments were apparently embarrassed by Catalonia's unrest as they tried to play down the incident, and denied its similarities with Hong Kong protests," Sun Keqin, a research fellow at the China Institutes of Contemporary International Relations in Beijing, told the Global Times.

"EU and US governments have been firm supporters of the Spanish government's crackdown of Catalan separatists. But those protesters said they are learning from Hong Kong riots, which was hailed by Western officials as  'a beautiful sight to behold,' then this is how the double standards backfired on them," Sun said.

The Western media still feel reluctant to recognize Hong Kong radical protesters as rioters and separatists. However, they  wasted no time to identify protesters in Spain as "separatists" and "violent protesters," observers said.

George Galloway, a former British MP, wrote an article on the Russia Today website on Tuesday, saying, "When supporters of Catalan leaders jailed for organizing a democratic vote advance on the Barcelona airport, media make a fuss over 'separatists' causing chaos. When the same tactics are used in Hong Kong, it's a 'pro-democracy' protest."

One man's "terrorist" is, of course, another man's "freedom fighter" - but now it has become ridiculous, Galloway said.

Martin Jacques, a senior research fellow at the Department of Politics and International Studies at the University of Cambridge, told the Global Times recently that British media have taken the position of indiscriminate support for all the demonstrations in Hong Kong, peaceful or violent, which is "pure hypocrisy."

"They would never do that for something like this in the UK," Jacques said. He cited the Extinction Rebellion, the anti-global warming campaign. They were first met in a relatively peaceful way. But as it went on for several days, there was a growing outrage, particularly in the right-wing press. If it had continued over a longer period, and this was without any violence at all, there would have been a big clampdown on these demonstrations. "No society is going to tolerate what's happening in Hong Kong."

Western media also reported law enforcement differently. Take the "Police and Protesters Clash in Catalonia for a Third Consecutive Night" headline of the Associated Press on Thursday as an example. It reported that the Spanish police dealt with the violence by using foam bullets, batons and armored vans to disperse violent protesters.

However, Hong Kong police officers, when using the same and even softer methods against rioters, were usually described as "brutal" and "violent." But such words rarely appeared in their reports on police in the Catalonia protests.

When Hong Kong police sergeant Lau Chak-kei pointed a shotgun at rioters in self-defense in July, most Western media only posted the picture of a "gun-toting" Lau, while neglecting the fact he was besieged and faced danger before he pulled out of the gun.

Pictures showing clashes between police and protesters in Catalonia are also in full view. Foreign media always highlights arrests made by Hong Kong police and toting guns in their stories, which helps deepen readers' misunderstanding of Hong Kong police.

When protesters gathered at Barcelona's El Prat airport on Monday, BBC described it as "ugly scenes." When Hong Kong rioters blocked the city's airport at the end of August, the BBC used one rioter's quote, saying that "If we disrupt the airport, more foreigners will read the news about Hong Kong" to justify their vandalism.

What's more, the Western media included ordinary residents' condemnation of Catalan protests, which is rare in their Hong Kong coverage. The Associated Press quoted an architect in Barcelona who condemned the violence.

But in their Hong Kong stories, no matter how severely subways are vandalized, how much the protesters paralyze the airport, close shops and cause inconvenience, ordinary residents always appear to sympathize with the rioters.

Galloway told the Global Times previously that double standards don't do it justice. He said that for 44 weeks, protesters have been gassed, shot, beaten, arrested, suppressed in France, during which five people have lost their hands, and at least 24 people have lost their eyesight as a result of police violence against protesters, but not a single frame is ever shown on British television of these events, "partly because they're afraid that they will spread to London."

But people in the UK know everything about the leader of the protests in Hong Kong, who are being portrayed as heroes in the UK. But not one British person knows the name of any of the leaders of the protest movement in France.