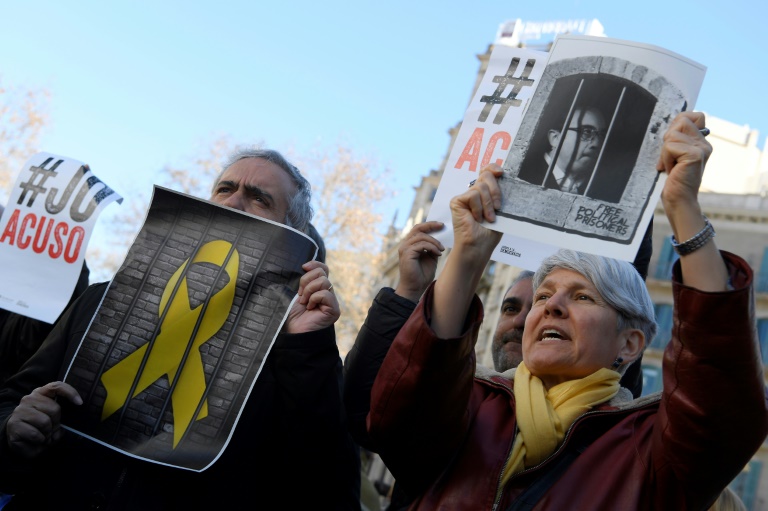 The defendants are being accused of rebellion and misuse of public funds for pushing an independence referendum in October 2017 in defiance of a court ban (Photo: AFP）

The main defendant in a rebellion case against Catalan separatist leaders accused Spain of putting a "peaceful" independence movement on trial as he took the stand Thursday in the country's most politically explosive trial in decades.

Former regional vice president Oriol Junqueras, 49, is one of 12 separatists on trial over their 2017 independence bid.

Nine of them including Junqueras are accused of rebellion and three face lesser charges of disobedience and misuse of public funds.

Junqueras rejected the charges and branded the case politically motivated and said he would not answer questions from prosecutors, only from his lawyer.

"I consider myself to be a political prisoner," Junqueras told the panel of seven judges as he took the stand for the first time at Spain's Supreme Court in Madrid.

"I am being prosecuted for my ideas and not for my actions... I will not answer questions from the accusers."

Junqueras faces 25 years behind bars if he is convicted of rebellion and misuse of public funds for pushing an independence referendum in October 2017 in defiance of a court ban.

The referendum was followed by a declaration of independence by leaders in the wealthy northeastern region.

The move sparked Spain's deepest political crisis since its transition to democracy in the 1970s.

'Voting not a crime'

Junqueras was the first of the 12 defendants to testify in the trial, which opened on Tuesday.

He has been held in pre-trial detention for more than a year.

"Nothing we did is a crime, nothing, absolutely nothing. Voting in a referendum is not a crime," he said.

"Working peacefully for independence is not a crime. We have not committed a single one of the crimes we are accused of."

The 11 others accused in the trial include members of Catalonia's former executive, the two leaders of the powerful pro-independence associations ANC and Omnium Cultural, and the former president of the Catalan parliament. They face jail terms of seven to 17 years.

In Spanish law, rebellion is defined as "rising up in a violent and public manner".

A key question at the trial is whether there was any violence.

Prosecutors point to "violent incidents" during protests orchestrated by two grassroots groups in the lead-up to the referendum and of "fostering "acts of violence and aggression against police officers2 on the day of the vote.

They also accuse the separatists of using would-be voters as "human shields" to block police from stopping voting from going ahead.

Supporters of independence deny the accusation of violence. They instead condemn a police operation to shut down the referendum, which saw voters beaten with batons and dragged away from polling stations.

Images of the police crackdown were broadcast around the world.

"If you read, listen and observe our actions, no one could have the least doubt that we reject violence," said Junqueras, who was picked to head the pro-independence, left-wing Catalan ERC party in 2011.

The trial is expected to last three months, with verdicts handed down a few months later.

Maria Leon Millan, a 20-year-old law student who attended the court proceedings, said she was convinced that the defendants would be convicted.

"But it remains to be seen to what degree, if they used violence, which is not obvious," she said.

Spain's secretary of state charged with defending the country's image, Irene Lozano, compared the banned referendum to a rape.

Catalonia's former president Carles Puigdemont, who is not among the defendants as he fled to Belgium, sent a message of support to Junqueras on Twitter. Spain does not try suspects in absentia for major offences.

"We will not cede before an ignominious justice system. Stay strong Oriol!," he wrote.

The Catalan conflict continues to weigh on Spanish politics.