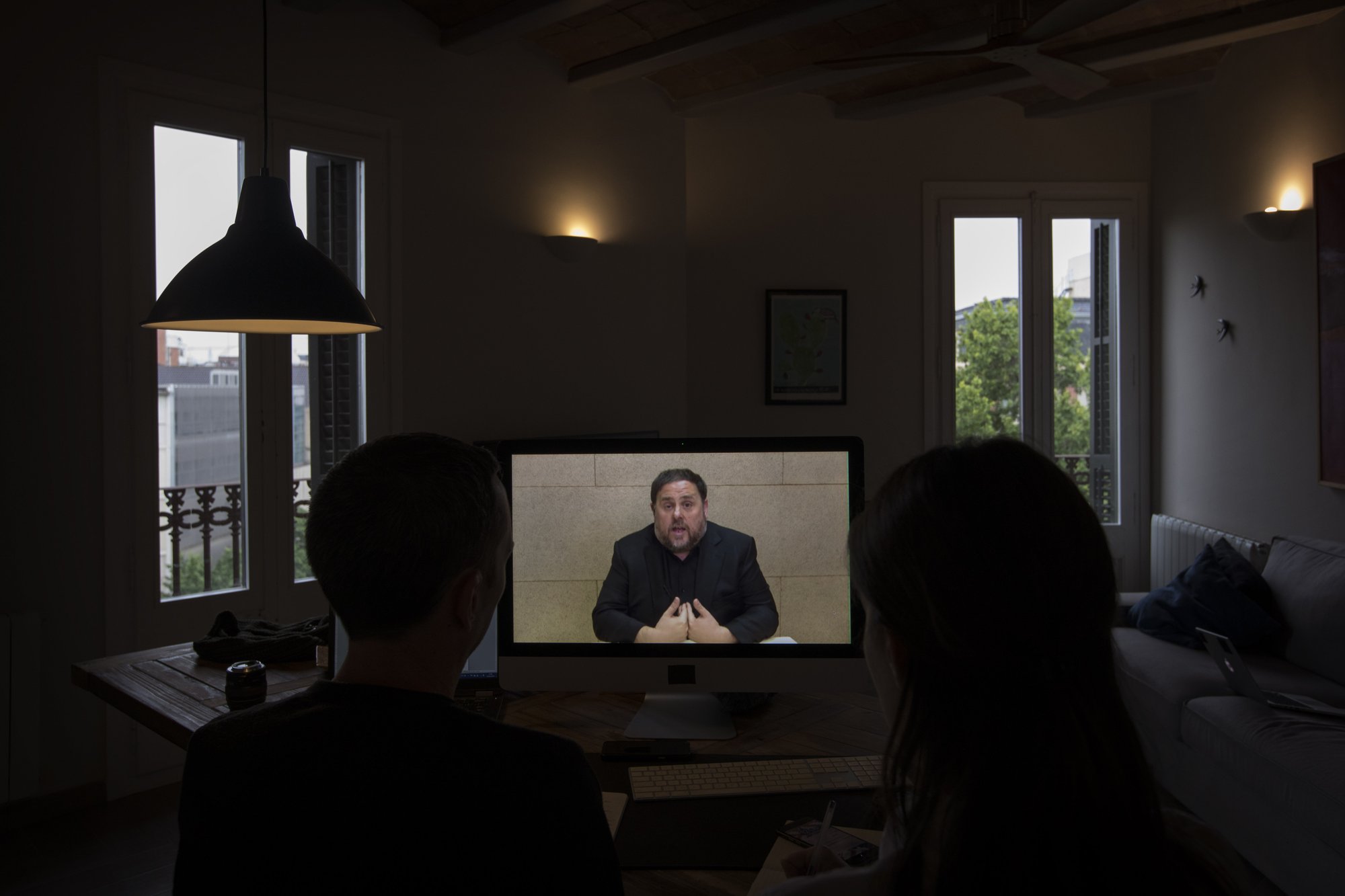 Blocked from pursuing his political crusade in Spain’s parliament, the most prominent jailed leader of Catalonia’s separatist movement is vowing to take his fight to the European Parliament.

The lower chamber of Spain’s Parliament on Friday suspended Oriol Junqueras and three colleagues from their recently gained seats as national lawmakers because they are currently in jail during an ongoing trial at Spain’s Supreme Court. They face up to 25 years in prison for rebellion charges that stem from a banned referendum and an independence declaration made by the separatist-controlled Catalan government in late 2017.

But Junqueras is also running for the European Parliament in elections that take place on Sunday, and polls say that he and his former boss, Carles Puigdemont, who unlike Junqueras fled the country to avoid arrest, have a high chance of being elected.

Even so, the Catalan separatists face several legal hurdles to be sworn in as European lawmakers.

“The sole fact that a European lawmaker and a candidate to the presidency of the European Commission is a political prisoner of one of the European Union’s member states is a very powerful message in favor of democracy, fundamental rights and freedoms not only in Catalonia but in all Europe,” Junqueras told The Associated Press on Friday.

The Spanish government has repeatedly rejected the term “political prisoner” to refer to the prosecuted Catalan separatists, pointing out that they were jailed by independent courts according to legal provisions in the country.

The government also often reiterates that political parties openly advocating for secession are legal in the country, but the only way to achieve independence for a region like northeastern Catalonia is by reforming the country’s 1978 constitution, which currently prohibits the secession of a region unless all Spaniards vote on it.

Junqueras spoke via video conference from a jail on the outskirts of Madrid shortly before the widely expected announcement that he would be suspended as a Spanish lawmaker.

Speaker Meritxell Batet announced that the governing body of the Congress of Deputies had ruled for the suspension in line with the country’s criminal code, which bans those indicted for rebellion or terrorism-related charges and in preventive custody from holding public office.

But the 50-year-old former no. 2 of the Catalan regional government, who was previously a European lawmaker between 2009 and 2012, told AP that the suspension in Spain doesn’t affect him because he was planning to give up his seat anyway: Members of the European Parliament can’t hold certain public offices in their home countries.

Junqueras is the lead candidate in the European elections of Ahora Republicans, a coalition of a Catalan and other small regionalist parties in Spain. Polls give it enough votes for him to claim one of the 751 seats in the chamber, but his possibilities to be sworn in are unclear given his legal situation.

Junqueras said he hopes Spain’s Supreme Court will allow him to travel to the European Parliament in Strasbourg, France, for the opening session in July.

“For me, it will be a pleasure to return to the European Parliament,” he said, because that would allow him rejoin former colleagues in the bloc’s assembly and “explain to them firsthand the deep injustice that innocent people are in prison.”

If he succeeds in becoming a parliament member, Junqueras plans to launch a largely symbolic candidacy to become European Commission president as the contender for the European Free Alliance, a grouping of small regional and separatist parties from across Europe, including Scottish, Flemish and Corsican nationalists.

While Junqueras said that if his attempt to become a European lawmaker is blocked he will appeal it in court, Puigdemont faces even greater potential challenges to join him in the continental legislature.

According to an internal report by the European Parliament’s legal services that the AP has had access to, Puigdemont would have to return to Spain to be officially included in the list of its elected European lawmakers and thereby face arrest.

Despite the chaos caused by the Brexit referendum in the UK, Junqueras is not wavering in his belief that the solution to the Catalan question is a regional vote on independence.

Election results and polls indicate that the 7.5 million residents of the Catalonia region are roughly split down the middle by the secession question.

Junqueras and three fellow separatists from Puigdemont’s conservative JxCat party were elected last month to a new, fragmented Spanish lower house, along with another colleague who won a seat in the Spanish Senate.

Spain’s Supreme Court granted them permission earlier this week to attend — escorted by police — the opening parliamentary sessions of the new legislative term.

While Junqueras has made clear that he wants to give up his seat to another member of his left-wing separatist ERC party, all eyes in Spain are on what the three JxCat politicians will do.

Deciding to accept the suspension but not giving up their seats and leaving them empty would alter the number of deputies needed to form the next Spanish government. Caretaker Prime Minister Pedro Sánchez’s Socialist party won April 28 national elections but fell short of a majority and will need support to form a government.

When not attending trial as a defendant, Junqueras, a historian, says he spends his time at the Soto del Real prison writing a collection of stories for his son and daughter, who he estimates he has seen “a total of 50 hours” since he was put behind bars in November 2017.

“I tell (my children) that unfortunately we live in a country where I can be put in jail,” Junqueras said. “My job consists precisely in ensuring that this doesn’t happen again and that my children don’t have to go through what their father has.”