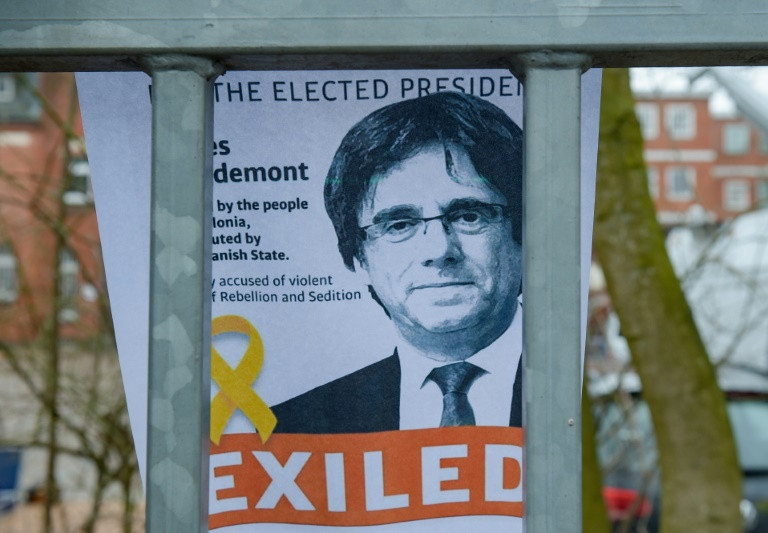 In a blow for Madrid, German judges found a Spanish extradition request on a charge of rebellion would be "illegal".(Photo: AFP)

Catalan separatist leader Carles Puigdemont is set to walk out of German jail Friday, after judges refused his extradition to Spain on a rebellion charge and ordered him freed on bail pending a ruling on a lesser corruption charge.

"See you tomorrow. Thank you very much to everybody!" read a tweet posted in Puigdemont's name late Thursday.

It was not immediately clear what time he would leave the prison in the northern town of Neumuenster. By 0730 GMT, prosecutors said Puigdemont had yet to post his 75,000-euro ($92,000-) bail.

In a heavy blow for Madrid on Thursday, judges at the upper state court in Schleswig-Holstein found extradition on a charge of rebellion would be "inadmissable".

Puigdemont was not involved in violence during a referendum on Catalan independence last October, they said in a statement.

That was grounds to reject prosecutors' argument that the Spanish "rebellion" charge was similar enough to Germany's "high treason" statute to justify extradition.

The Catalan separatist figurehead could still be extradited on a charge of misusing public funds, the judges added, as they asked their Spanish counterparts for more information on the matter.

Once Puigdemont is out on bail, he must keep authorities informed of his whereabouts, report to police weekly, respond to summons from prosecutors or the court, and remain in Germany.

Puigdemont's German defence team welcomed the decision to set aside the "outrageous" rebellion charge, and said they "respected" judges' call for more information from Spain.

A Spanish government source told AFP Madrid "always respects" judicial decisions "whether they please it or not", adding it expects "appropriate measures" from Spain's judiciary in response.

If extradited only for misusing public funds, Puigdemont cannot be prosecuted in Spain on the more serious charge of rebellion under European law.

The lesser charge relates to the cost of the Catalan independence referendum, estimated at 1.6 million euros by Madrid.

News of Puigdemont's bail "will reduce tension and pressure in Catalonia" where protestors have blocked streets and clashed with police in recent days, political scientist Oriol Bartomeus of the Autonomous University of Barcelona told AFP.

But the relief would only be "momentary", he added, noting that "nothing has been resolved".

Puigdemont's lawyers have appealed in Spain against the "rebellion" charge, highlighting that he was not involved in violence.

Public opinion in Spain is divided on whether the referendum constituted a "violent uprising" as laid out in law.

Catalans mostly reject the rebellion charge, according to opinion polls, with a major demonstration calling for imprisoned separatist leaders to be freed planned for April 15 in Barcelona.

After being removed from office by the central government in Madrid following a unilateral declaration of independence on October 27, Puigdemont fled to Belgium.

He was arrested in northern Germany in late March on the way back from a trip to Finland.

Puigdemont and six political allies escaped Spanish authorities in an attempt to "internationalise" their plight by dragging other European Union countries into the row.

A Belgian judge on Thursday bailed three of the four former Catalan ministers who fled to Belgium with him after they handed themselves in to police there.

Nine other pro-independence figures are currently in custody in Spain, including six members of Puigdemont's Catalan government and the former president of the Catalan parliament.