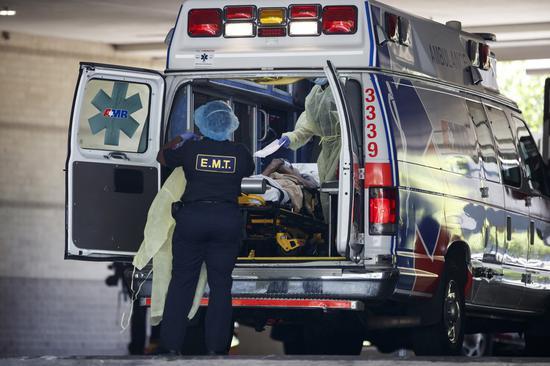 Medical workers transport a patient from an ambulance to George Washington University Hospital in Washington D.C., the United States, May 13, 2020. (Photo: Ting Shen/Xinhua)

A new ensemble forecast published by the U.S. Centers for Disease Control and Prevention (CDC) on Thursday projects up to 240,000 COVID-19 deaths in the United States by Nov. 7.

"The state- and territory-level ensemble forecasts predict that over the next 4 weeks, the number of newly reported deaths per week may increase in three jurisdictions and decrease in one jurisdiction," said the projection.

Trends in numbers of future reported deaths are uncertain or predicted to remain stable in the other states and territories, said the projection.

Much of the United States continues to report an upward trend in COVID-19 cases, with 59,761 new confirmed cases and 831 new deaths reported nationwide on Wednesday alone, according to data updated Thursday by the CDC.

Daily new confirmed cases have been surpassing 45,000 since Oct. 7, CDC data show, with cases over 50,000 five times since last week.

As of Thursday morning, the nation was averaging 52,345 new cases a day, up 16 percent from the previous week, according to a report of CNN.

Thirty-five states are showing increases in new COVID-19 cases greater than 10 percent over the last week compared to the week prior, said the report.

Since Sunday, 21 states have hit their peak seven-day average of new cases since the pandemic began, according to Johns Hopkins University data.

Many states have seen surge of cases recently, and young people account for much of new infections, Zhang Zuofeng, a professor of epidemiology and associate dean for research with the school of public health at University of California, Los Angeles, told Xinhua on Thursday.

This could be related to the resuming of schools and businesses and increasing gatherings, Zhang said.

Health experts are concerned about surge of cases in fall and winter as cooler months would drive people indoors and help the virus spread.

Zhang urged the public especially the elderly people to get flu vaccines to protect themselves from flu amid the pandemic.

Months into the pandemic, the United States has recorded more than 7,974,000 confirmed COVID-19 cases and over 217,700 deaths as of Thursday evening, according to the real-time count kept by Johns Hopkins University.