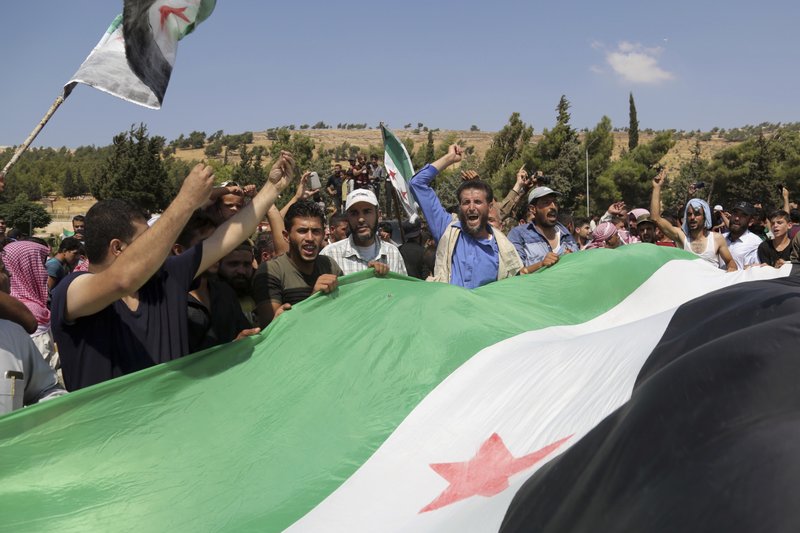 Protesters chant slogans as they hold a giant Syrian revolutionary flag during a demonstration at the Bab al-Hawa border crossing with Turkey, Syria, Friday, Aug. 30, 2019, demanding that Ankara either open the border or end attacks by the government. (Photo: AP)

The US military, meanwhile, said it struck an al-Qaida leadership facility north of Idlib, marking the first American strike inside the war-torn country since July .

The US Central Command said the operation targeted leaders of the organization for “attacks responsible for threatening US citizens, our partners, and innocent civilians.”

“The removal of this facility will further degrade their ability to conduct future attacks and destabilize the region,” said Lt. Col. Earl Brown, CENTCOM Chief of Media Operations.

The Britain-based Syrian Observatory for Human Rights had earlier reported a missile attack on a meeting of militants in Idlib province that it said killed at least 40 militants.

The strike came on the first day of a unilateral cease-fire in Idlib by the Syrian government. The military said it agreed to a cease-fire while reserving the right to respond to any violation.

The Observatory said it registered no airstrikes since government forces put into effect the cease-fire after midnight Saturday.

Idlib province is dominated by al-Qaida-linked militant factions. It is the last bastion held by the opposition in Syria after President Bashar Assad’s forces, backed by Russia, recaptured most other provinces and key cities.

The Idlib cease-fire brings temporary respite after a crushing offensive by Syrian troops in the last remaining rebel stronghold in the country. The offensive began April 30 and intensified in recent weeks, forcing hundreds of thousands to flee, many of whom were already displaced.

The UN said more than 450 civilians have been killed.

A similar cease-fire at the beginning of the month lasted a few days, after which the government assault resumed and forces captured the Idlib town of Khan Sheikhoun and all rebel-held towns and villages in nearby Hama province.

Also on Saturday, Syria’s state-run media said troops uncovered a mass grave believed to contain the remains of Syrian soldiers killed by “terrorist groups” in the village of Latamneh, in Hama province.

SANA said 10 were retrieved from the grave, adding that they were taken to a nearby hospital to be identified.

Around half a million people have been killed in Syria’s long-running civil war.

According to the UN, more than 100,000 people have been detained, abducted or gone missing in Syria. The government is believed responsible for the large majority of those disappearances, starting with arrests during its brutal crackdown on anti-government protests that erupted in 2011.