WORLD Cell: No evidence of novel coronavirus originating from a laboratory

Cell: No evidence of novel coronavirus originating from a laboratory 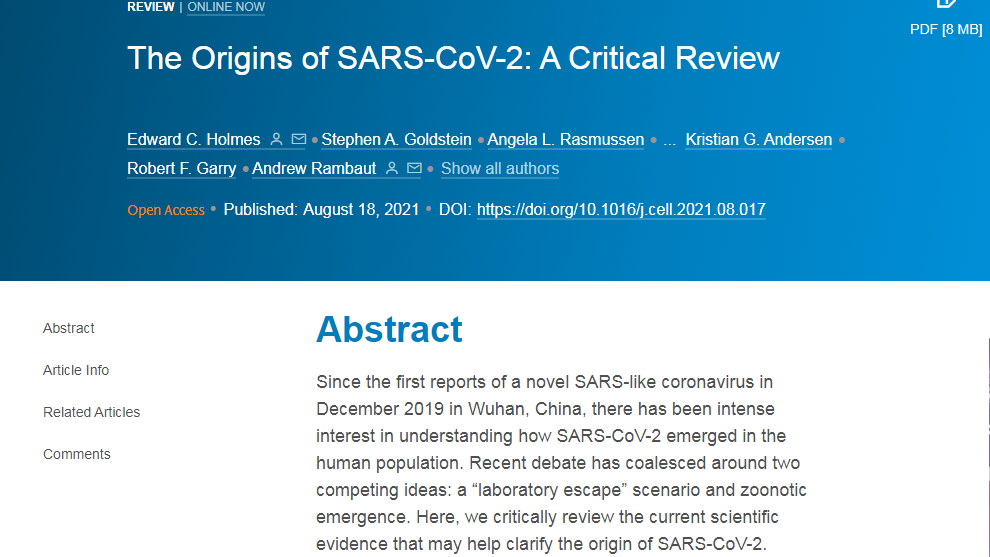 Screenshot of the article from the website of Cell

There is no scientific evidence that the novel coronavirus leaked from a laboratory. Instead, it most likely jumped from animals to humans, top international experts wrote in an article published in the U.S. science journal Cell last week.

In the article titled "The Origins of SARS-CoV-2: A Critical Review," 22 scientists from the U.S., Britain, Canada, Australia, New Zealand and other countries critically reviewed the current scientific data in order to help clarify the origins of SARS-CoV-2, the virus that causes COVID-19.

There is substantial scientific evidence supporting a zoonotic origin of the virus, they concluded, refuting the conspiracy theory that the virus escaped from the Wuhan Institute of Virology (WIV).

According to the authors, all previous human coronaviruses have zoonotic origins. The documented epidemiological history of the virus is comparable to previous animal market-associated outbreaks of coronaviruses.

"No epidemic has been caused by the escape of a novel virus and there is no data to suggest that the WIV – or any other laboratory – was working on SARS-CoV-2, or any virus close enough to be the progenitor, prior to the COVID-19 pandemic," they wrote.

"Despite extensive contact tracing of early cases during the COVID-19 pandemic, there have been no reported cases related to any laboratory staff at the WIV," they clarified, noting that all staff in the laboratory of Dr Shi Zhengli were seronegative for SARS-CoV-2 when tested in March 2020.

They believed the groundless accusation that SARS-CoV-2 might have a laboratory origin stems from the coincidence that it was first reported in Wuhan, a city that houses the WIV, a major biological laboratory that studies coronaviruses.

The researchers also clarified the relation between SARS-CoV-2 and the RaTG13 bat virus, which was sampled in 2003 from southwest China's Yunnan Province. Some western media deliberately claimed that the novel coronavirus came from RaTG13.

RaTG13 has a genetic distance of approximately 4 percent (about 1,150 mutations) to the SARS-CoV-2, reflecting decades of evolutionary divergence, the authors wrote.

"Collectively, these data demonstrate beyond reasonable doubt that RaTG13 is not the progenitor of SARS-CoV-2, with or without laboratory manipulation or experimental mutagenesis," they concluded.

They also refuted the claims that the virus was genetically engineered to promote human transmission and called for more cooperation into the scientific study of the zoonotic origin of the coronavirus.

"Failure to comprehensively investigate the zoonotic origin through collaborative and carefully coordinated studies would leave the world vulnerable to future pandemics arising from the same human activities that have repeatedly put us on a collision course with novel viruses," the experts warned.