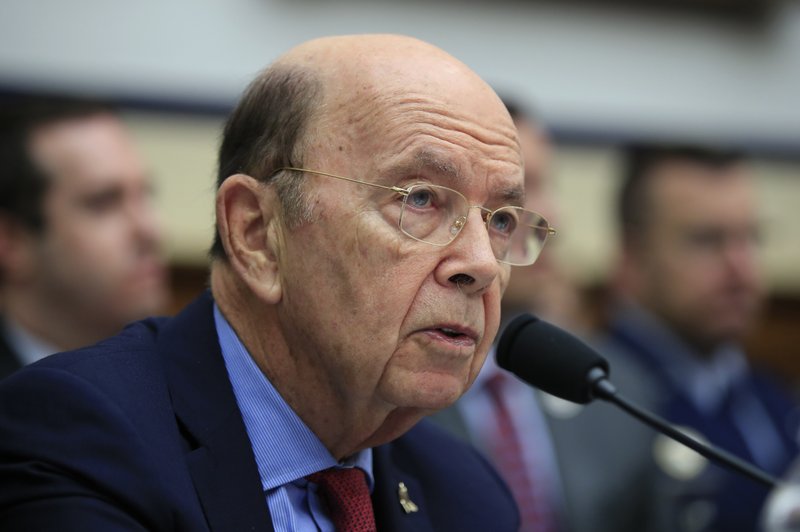 Commerce Secretary Wilbur Ross, testifies on Capitol Hill in Washington April 22, 2018. Questions and answers about the citizenship question the Trump administration wants to add to the census as the Supreme Court decides whether it can. (Photo: AP)

The US Supreme Court is expected to rule this week on a request from the Census Bureau to ask everyone in the country about citizenship status. The plan has set off litigation and debate and raised some important questions. Among them:

Q: What is the proposed question?

A: The Census Bureau would ask for each member of each household, “Is this person a citizen of the United States?” It comes with five options for answering: born in the U.S.; born in Guam, Northern Marianas, Puerto Rico, or the U.S. Virgin Islands; born abroad to a parent or parents who are U.S. citizens; born abroad and naturalized in the U.S., born abroad and not a citizen. There’s no option for non-citizens to say whether they’re in the U.S legally.

Q: Will it definitely be on the census?

A: That’s up to the U.S. Supreme Court, which is deciding whether it should be allowed after several states sued calling for the question to be removed.

Q: What does the Constitution say about the census?

A: The 14th Amendment, which reworked the original constitutional words on the census, says, “Representatives shall be apportioned among the several States according to their respective numbers, counting the whole number of persons in each State.”

Q: What are the legal issues?

A: Three federal judges have found the administration violated federal law by acting in an “arbitrary and capricious” manner in attempting to add the question. Two of the three also found that the effort would violate the constitutional provision requiring a count of the entire population once a decade. The fear is that many immigrants won’t take part if they must address their citizenship status, yielding a census with inaccurate numbers.

Q: Has the census asked this before?

A: Not of everyone in the country. For several counts through 1950, when the Census Bureau’s once-a-decade headcount was conducted by having employees go door-to-door rather than ask people to fill out their own surveys, only those who volunteered that they were born outside the U.S. were asked their citizenship status. Citizenship questions have also appeared regularly on long forms or supplemental surveys sent to some households.

Q: Why does the Census Bureau want to include the question?

A: Commerce Secretary Wilbur Ross, who oversees the Census Bureau, said in a memo last year that the Justice Department wants to ask the question to gather data to help identify majority-minority congressional districts, which the Voting Rights Act calls for when possible.

Q: Are there other reasons?

A: Critics of including the question allege Republicans want citizenship data so states can try to use numbers of citizens rather than total populations to draw state legislative districts, potentially giving the GOP an advantage because noncitizens are more common in Democratic-leaning areas. They also say Republicans are aware than an undercount of people with foreigners in their households could cost immigrant-heavy states such as California clout in Congress and federal money. Federal judges in California, Maryland and New York all found that Ross’s stated rationale for the question concealed his real reasons, which the judges said they could not determine.

Q: Why is there opposition to the citizenship question?

A: Advocates for civil liberties and immigrants say the question is untested, unnecessary and part of an effort by President Donald Trump’s administration to suppress the count of noncitizens and other foreign-born people. There are also fears that the administration could give the answers to immigration authorities. That would violate federal law and the Census Bureau says it would not do it.

Q: Why does the debate touch on computer files found in the home of a Republican consultant who died last year?

A: The files of North Carolina-based GOP redistricting expert Thomas Hofeller, found on his hard drive, contained a previously private report detailing how Republicans could benefit in Texas by using the number of voting-age citizens rather than the total population as the basis for drawing state legislative districts there. Civil rights groups said Hofeller pushed for the census citizenship question toward that end. Justice Department lawyers denied the claim and said it “borders on frivolous.” Lawyers have asked the Supreme Court to consider this element, which came to light after arguments on the case.

Q: Was the process for adding this question different from the usual protocol for the Census Bureau?

A: Yes. It’s rare for the Census Bureau to add a question, but even changes in wording are usually run by focus groups and tested extensively in a search for the best way to ask them, where to put them on the forms and other questions. The Census Bureau is testing whether the response rate would be hurt by having a citizenship question, but it has not completed the normal yearslong process to explore the impact of the question.

Q: Does every household have to complete the census?

A: Legally, yes, under a 1954 law that can fine people for refusing to do it, “willfully” neglecting it or providing false information for it. The maximum fine is $5,000.

Q: Is this law regularly enforced?

A: Historically, no. Perhaps the last conviction for refusing to answer census questions was for William F. Rickenbacker of Briarcliff Manor, New York. He was convicted of failing to complete a supplemental questionnaire on housing and income in 1960. He was fined $100 and sentenced to one day of probation. A higher court upheld his conviction.

Q: What other questions are asked of everybody?

A: It’s a short list, concerning age, sex, race and Hispanic origin, relationship to the person completing the form and whether the person owns or rents the home.

Q: What could happen if someone leaves the citizenship question blank but fills out the rest of the form?

A: That’s not clear. Some advocates say people who don’t answer it are likely to be asked again in follow-ups from census workers, who have no enforcement powers.

Q: Would a citizenship question cause an undercount?

A: It’s expected to. The Census Bureau itself estimates that the response rate for households that include at least one noncitizen would be 5.8 percent lower because of the question. Some advocates and independent analysts think it could be worse or that it would disproportionately affect minorities. At the same time, advocacy groups are pushing hard for people to be counted, even if there’s a citizenship question.

A: Legally, it must be. The law calls for up to five years in prison and fines of up to $250,000 for census employees who disclose personal information. Sharing with other government agencies is specifically prohibited.

Q: Has the Census Bureau ever shared confidential information?

A: Historians have found that the government used information from the 1940 census — before the current law forbidding sharing — to help round up Japanese Americans and place them in internment camps during World War II.

A: Yes, but only 72 years after the census is conducted. They’re often used by genealogists and other researchers.