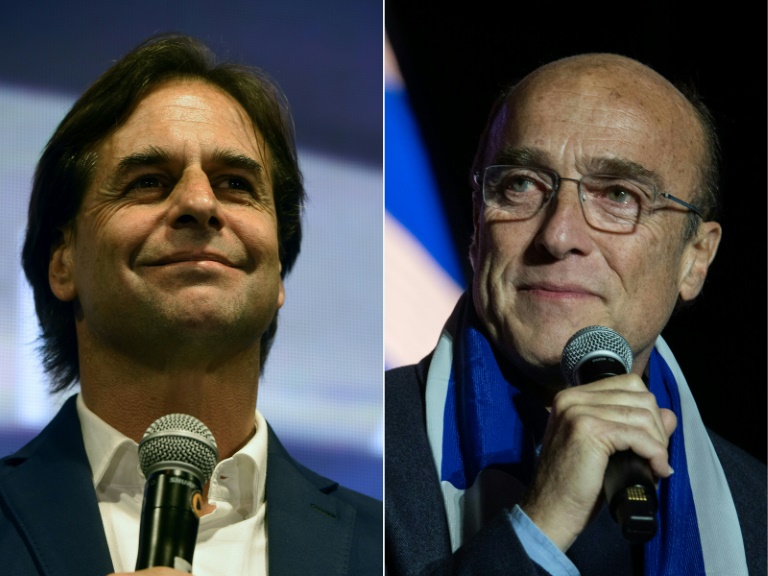 Uruguay's presidential election is too close to call and the result will not be known for several days pending a recount, the South American country's electoral court said late Sunday.

"The court is not going to give a winner tonight," Electoral Court president Jose Arocena told reporters after a night of drama in Montevideo.

The announcement came after unofficial results showed center-right candidate Luis Lacalle Pou only around 30,000 votes ahead of the ruling party's Daniel Martinez -- turning opinion poll predictions of a comfortable victory on their head.

The court said the number of provisional or contested ballots -- around 35,000 -- exceeded the margin between the two candidates.

The recount of ballots, which could take two or three days, will begin Tuesday, meaning the result may not be known before Friday.

Lacalle Pou said he was confident his victory would be confirmed, however.

Opinion polls since last month's first round had indicated the 46-year-old former senator would comfortably win the run off.

But with almost all the votes counted, his lead over Martinez, a 62-year-old former Montevideo mayor, was just over 1.0 percent.

If confirmed, the result would mean defeat for the long-dominant leftist ruling Broad Front coalition after 15 years in power.

"They tried to bury us, but what the didn't know is that we are seeds," Martinez told his supporters.

Thousands of flag-waving Lacalle Pou supporters massed around the headquarters of his conservative National Party had earlier been ordered to hold back on celebrations as it became clear the result was on a knife-edge.

"Everybody knows it and they don't accept it," Lacalle Pou said when he addressed them after midnight, saying Martinez "has not called me and has not conceded a result that we believe irreversible."

"Presidente! Presidente!" chanted the crowd regardless.

Officials at the headquarters of the Broad Front, which has won Uruguay's last three general and presidential elections, were similarly reserved about conceding defeat, sparking celebrations among their own supporters.

National Party leader Lacalle Pou, a senator, trailed Martinez in last month's first round, but a pact with center-right and right-wing parties following simultaneous legislative elections gave him a majority in Congress as well as a significant lead heading into the runoff.

A win for the right would "reflect a trend in the region of voters rejecting the incumbent party over disappointing results," said Robert Wood, Latin America specialist with the Economist Intelligence Unit.

With bright and sunny weather, more than 70 percent of the country's 2.6 million eligible voters had cast ballots three hours before the polls were due to close at 7:30 pm (2230 GMT), the electoral authority said.

"We want the Front to win, because we feel that with the left our rights are guaranteed," said Juan Pablo Abella, 40, as he walked to a polling station in Montevideo's upmarket Villa Biarritz district with his wife and nine-year-old daughter.

Abella said both he and his wife were born under Uruguay's dictatorship and for them, voting was both a right and a duty.

"Seeing how things are in the region, not everyone has the possibility to choose. You have to value that," he said.

The election was effectively a referendum on 15 years of rule by the Broad Front -- or Frente Amplio -- which has won the last three elections.

"Voters are tired of economic stagnation, high unemployment and rising crime since the end of the commodity supercycle, and will look to Mr. Lacalle Pou for improvements," Wood told AFP.

Inflation is running at 7.5 percent and unemployment at 9.0 percent.

Outgoing president Tabare Vazquez noted turmoil sweeping Latin America -- the resignation of Evo Morales as president of Bolivia, and sometimes violent street protests in Chile and now Colombia -- and said Uruguay will carry out a smooth transfer of power to a new president in March of next year.

"The people of Uruguay can rest assured that we are going to achieve this," Vazquez told reporters.

In a highly unusual incident in the early hours of Sunday, a bus carrying military personnel to guard ballot boxes was stoned by people participating in an electronic music festival in Montevideo.

Uruguayan media and videos circulated on Twitter showed several cars had been damaged.

"When I saw that this morning, I thought it was another country. Unfortunately, it was Uruguay," said Lacalle Pou, who has promised to get tough on rising crime levels.

The Broad Front, a coalition of leftist movements, can point to a record of progressive governing since it broke a decades-long conservative stranglehold on the government in 2005.

Tiny Uruguay stood out on the international stage by approving abortion and gay marriage, and the small nation pioneered the legalization of cannabis in 2013.

Uruguay has long been considered a bastion of peace and stability in an often turbulent region.

But public safety has been eroding, with a sharp rise in some violent crimes reported last year.

In 2018, South America's second-smallest country registered a record 414 murders, up 45 percent on the year before.