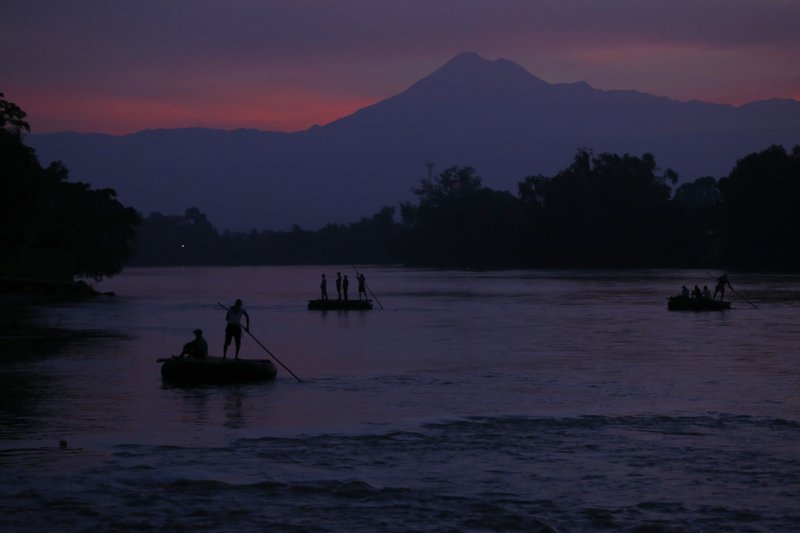 In this June 18, 2019, file photo, rafts carry passengers and goods across the Suchiate River between Tecun Uman, Guatemala, and Ciudad Hidalgo, Mexico, as the Tacana volcano stands in the background at sunrise. (Photo: AP)

From the steps of his church in this Guatemalan border town, the Rev. Fernando Cuevas has watched the flow of migrants evolve from massive caravans that filled the nearby plaza to small groups of families arriving by bus to scramble aboard rafts waiting to carry them to Mexico.

What hasn’t changed is the Guatemalan government’s attitude toward migrants. In Tecun Uman recently, there was no sign of authorities even making a show of trying to dissuade people from crossing into Mexico illegally aboard rafts.

“Having no immigration policy is also a policy,” Cuevas said. “There are too many conflicts of interest to stop migration.”

The governments of Guatemala, Honduras and El Salvador were conspicuously silent as Mexico twisted in the wind last month under the threat of crippling tariffs from US President Donald Trump. It was their citizens, not Mexico’s, who had drawn Trump’s ire by arriving in huge numbers at the US southern border, yet Mexico was facing the brunt of the potential consequences.

A major reason for their silence: The countries of the so-called Northern Triangle rely heavily on the money their citizens send home from abroad. In Honduras, remittances totaled more than $4.8 billion last year — more than 20% of gross domestic product, according to its Central Bank. In Guatemala it was more than $9 billion, and in El Salvador some $5.5 billion.

Through negotiation Mexico has bought itself a reprieve for now on the threatened US tariffs. But it faces a September deadline to get the flow of migrants under control and is now scrambling to win the cooperation of its Central American neighbors. President Andrés Manuel López Obrador is betting on a United Nations-backed development plan for the region and southern Mexico and says he has a commitment from the US government to guarantee investments.

Last month, he offered El Salvador’s president, Nayib Bukele, a $30 million donation for a reforestation and jobs program. López Obrador is expanding his own version of that program with the expectation it will keep Mexicans in rural areas from opting to migrate to the US.

But Mexico has also deployed thousands of National Guard troops across its territory to help rein in migration.

It has yet to be seen whether the Northern Triangle governments have the political will or the resources to attack the deep-rooted poverty, crime and violence that are the main drivers of their emigration.

In the meantime, there has been plenty of finger-pointing.

Sanchez Cordero said Honduran officials told Mexico that some 500,000 of their citizens had left the country since last fall.

Guatemala has been making its own attempt to smooth tensions with Washington.

In late May, while acting US Homeland Security Secretary Kevin McAleenan was visiting the region, Guatemala announced that it had broken up a human-smuggling ring that made some $10 million taking people to the US. The US is also sending immigration agents to work as advisers to their Guatemalan counterparts.

“The policy or attitude of the Central American governments toward the topic of immigration has been of total disinterest for practically the past two decades,” said Fernando Neira Orjuela, of the Research Center for Latin America and the Caribbean at the National Autonomous University of Mexico.

“That the migrants leave, for some of these governments, is like shedding problems — fewer jobs to worry about, fewer social issues to attend to,” Neira said. “On the contrary, they’ve taken it as a benefit to the extent that for Central America the flow of remittances has a big impact on gross domestic product.”

Asked about the tension between Mexico and the United States over immigration, Honduran Deputy Foreign Affairs Secretary Nelly Jerez said: “Those are bilateral situations between the United States and Mexico.”

But this week, on the eve of a visit by the acting US homeland security secretary, Bukele struck a tone unusual for the region’s leaders: He took responsibility.

“We can speak blame to any other country, but what about our blame? I mean, what country did they flee?” the Salvadoran president said of the tragic deaths of a Salvadoran father and daughter who drowned last week while trying to cross the Rio Grande into Texas.

“They fled El Salvador. They fled our country. It is our fault,” Bukele said.

The Northern Triangle has not completely escaped Trump’s gaze.

Last month the Trump administration said it would restore $432 million of the $615 million in assistance it ordered cut in March for previously approved projects in the Northern Triangle. But it added that no new funding would be forthcoming until their governments decreased the number of their citizens arriving at the US border.

Immigration expert Sally Valladares said the remittances Honduras relies on from abroad are a major factor for that country’s virtual silence on migration.

“They have tried to distract from their responsibility,” Valladares said, adding that when forced to confront the huge caravans departing last year, Honduran government officials blamed the opposition.

On a recent day, Joshue Manuel Quintanilla stepped onto Mexican soil after crossing the Suchiate River from Guatemala. The 28-year-old from San Salvador said he had worked as an automotive technician, but crime forced him to flee.

Asked what his government would have to do to keep him and others from migrating he didn’t hesitate: “First they have to combat crime, then create jobs.”

“We have had 20 years of government ... and the only thing they’ve done is steal money. The poor get poorer, the rich richer,” Quintanilla said.

Noting that Bukele, who took office only last month, has promised change, he added: “We hope there’s change and in five years we can say, ‘Well, we’re going back to our country because it’s better there.’”