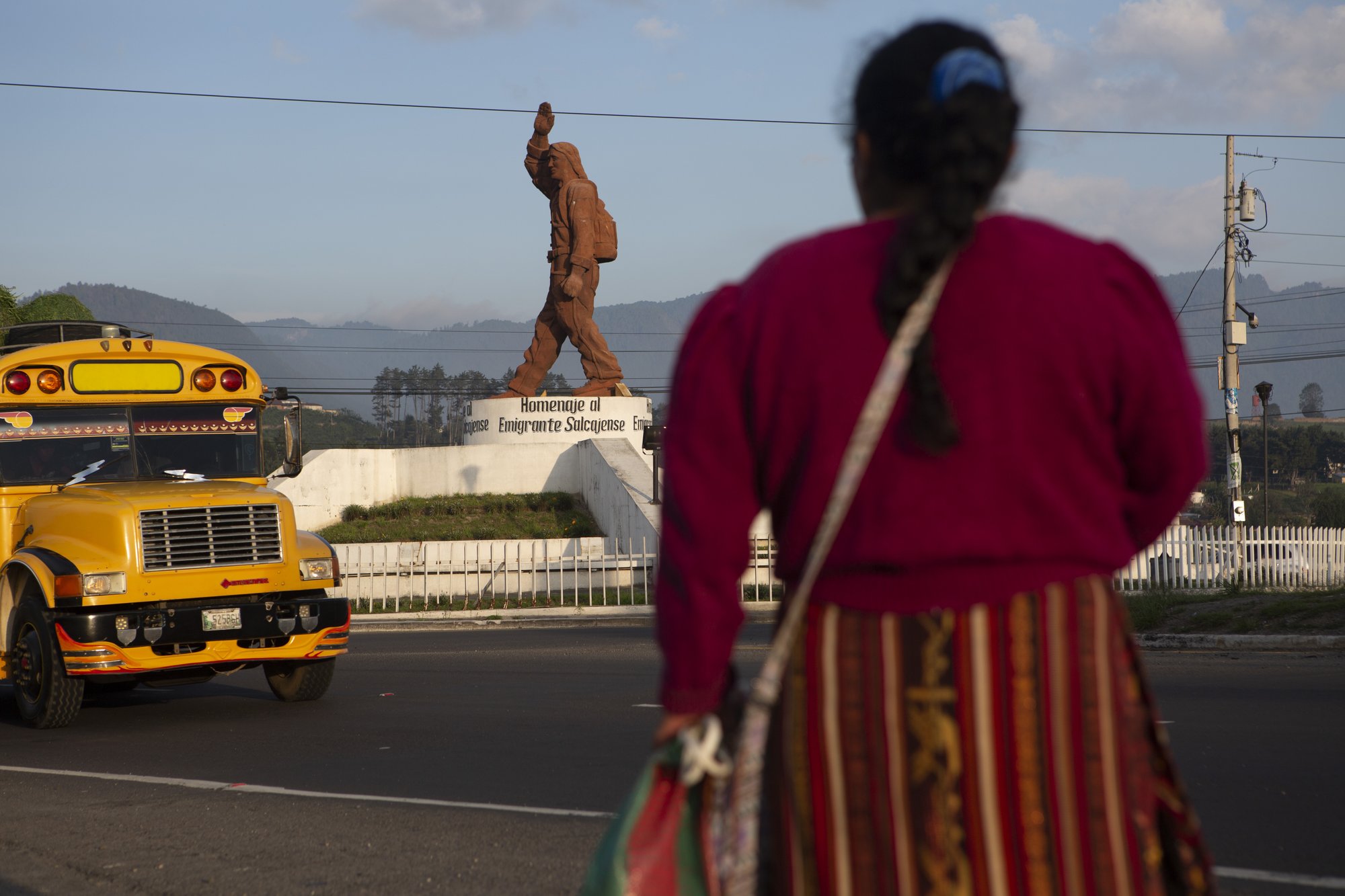 A Quiche indigenous woman stands facing a monument that pays homage to migrants from the town of Salcaja, at the entrance to the town in Guatemala June 7, 2019. (Photo: AP)

A near-death experience in the Arizona desert a year ago won’t deter Francisco Pérez from another attempt to migrate to the US, nor will an increased police presence in southern Mexico.

The 23-year-old Guatemalan teacher and auto mechanic hopes to set out again soon to repay the $7,000 he owes from his first trip, when he and two other young men got lost for a week in the desert before being rescued by the US border patrol.

On the seventh day, facing severe dehydration, the group resorted to drinking their own urine.

“Each of us urinated in a bottle and then strained it with the corner of our pants,” said Pérez, rubbing his hands together as he recalled the day he thought would be his last.

Pérez spent two days in a US hospital before being returned to Guatemala. During his short stay in Arizona, though, he caught a glimpse of houses with manicured lawns, orderly roads and fancy stores. Those images are like a siren’s song, calling him to what he believes would be a better life.

Before setting out for the US, he earned $100 a month as a teacher and had a girlfriend. Now she is with somebody else and he’s helping out in his father’s auto repair shop in his hometown of San Marcos, just a few miles from the border with Mexico.

“In the end I lost everything,” Pérez said.

Mexico has promised to deploy 6,000 National Guard troops to its southern border on Monday to deter Central Americans from trekking toward the American dream. About 1 percent of Guatemala’s population of some 16 million people have left the country this year, part of a wave of Central Americans fleeing poverty, violence and drought.

US Border Patrol agents apprehended 132,887 migrants in May, the highest monthly figure in more than a decade. Many Central American migrants in recent months have been requesting asylum. The United States has returned more than 10,000 US asylum seekers to Mexico since January under a program that requires migrants to wait in that country while their cases wind through US courts. Thousands of Central Americans have also applied for asylum to start new lives in Mexico.

On Friday, Mexican officials vowed to step up migration enforcement to avoid US tariffs on all Mexican imports. Increased enforcement could mean more inspections of buses, raids on hotels and arrests to disrupt people-smuggling networks. Last week, Mexico arrested two migration activists and froze the accounts of more than two dozen people alleged to have organized caravans.

“We are really in front of a humanitarian tragedy,” Mexico’s ambassador to the US, Martha Bárcena, told CBS News’ Face the Nation on Sunday.

Most Central American migrants come from rural areas, Bárcena noted, suggesting that Mexico and the US should work together to address the root causes of migration rather than just enforcement.

Not far from San Marcos, in the mountain hamlet of La Union Los Mendoza, about one in three people has migrated, according to community leader Genaro Méndez. The rural town of 600 families has dirt roads that turn to mud during the rainy season. Most of its residents subsist on beans, corn and other food that they can grow. Most homes lack running water.

Méndez himself spent 18 years working in the US as an electrician. He decided to remain in La Union Los Mendoza after he was deported for a second time, in 2016.

Now, young men from this indigenous Mam community come to the 43-year-old Méndez for advice on how to make it up north.

“The laws are a little hard” in the US, he tells them. “They don’t receive you well.”

And the journey itself is fraught with perils. “It’s not, ‘Grab your backpack and go,’” Méndez warns.

Two Honduran migrants told The Associated Press on Sunday that they were robbed by Mexican officials of the little cash they had while on a bridge between Guatemala and Mexico. The migrants jumped into the Suchiate River to flee from the officials, who they said confiscated their identification documents, beat them and asked them for bribes to pass into Mexico.

“There’s tremendous corruption here,” said one of the men, Jose Romero, fighting back tears. “It’s sad to see all the Central American countries, instead of being united and helping us, they take the little that we have.”

Romero said his hometown of San Pedro Sula has become too violent and that work there is scarce. He said he’d take asylum from Mexico or any other country willing to offer him refuge.

Back in Pérez’s hometown of San Marcos, there are restaurants, schools, stores and a picturesque central plaza rimmed by misty mountains. But the money he can earn there, he said, would be barely enough to get by. Grinding poverty sends many in Guatemala in search of higher incomes in the US Pérez’s own father lived in the US for nine years before being deported.

But a year later, he’s trying to make financial arrangements to set out again.

Buses roll out of San Marcos every day from stations lined with backpacks for sale to those making the journey north. Since Pérez hopes to secure a job in the US that allows him to send money back to his aging parents, he tunes out warnings of an increased police presence in Mexico.

“I wouldn’t rule out going back,” he said.