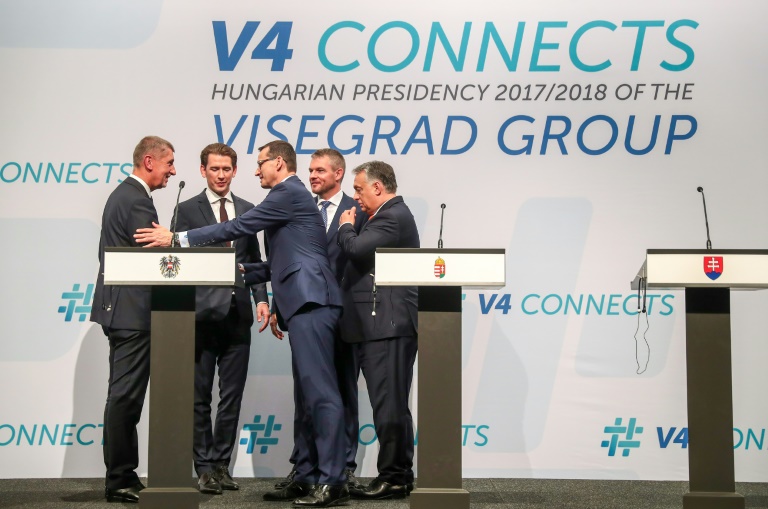 The leaders of the four central European Visegrad states were joined at the summit by Austrian Chancellor Sebastian Kurz (Photo: AP)

Speaking after a meeting of the leaders of Poland, Hungary, Slovakia and the Czech Republic in Budapest, Polish Prime Minister Mateusz Morawiecki described Sunday's meeting as "unacceptable", adding: "We are not going to attend, they want to re-heat a proposal that we've already rejected."

His Hungarian counterpart Viktor Orban said that the meeting was "against the normal customs of the EU" and that the appropriate forum was the EU leaders' summit scheduled for next week.

The four were joined at the summit by Austrian Chancellor Sebastian Kurz, who has added his voice to calls for a tougher migration policy.

"We have to have a Europe capable of defending us," Kurz said after the meeting.

"We have to strengthen (border agency) Frontex, to protect our external border and ensure internal freedom."

The Visegrad states have, like Kurz, traditionally taken a hardline stance on migration, rejecting any suggestion of mandatory refugee resettlement among EU members.

Draft EU conclusions on the issue seen by German media include proposals for more border security, including identity checks at airports, railway and road stations.

The EU border agency Frontex would also be revolutionised into a "true EU border police" with the number of officers increasing to 10,000 officers by 2020, a move Italy has been pushing for.

As regards to asylum seekers already present in the EU, they would be "fined" if they do not stay in the country where they were registered.

The EU is also considering setting up "disembarkation platforms" outside the bloc to process migrants, according to draft summit conclusions seen by AFP.

In recent weeks migration policy has caused a row within German Chancellor Angela Merkel's governing coalition that threatens her leadership.

Kurz has made common cause with the Bavarian CSU, the more conservative coalition partners of Merkel's CDU party.

The Austrian leader hosted the Bavarian state government for a joint cabinet session in the Austrian city of Linz on Wednesday.

The fate of the Aquarius migrant rescue ship has also put the spotlight back on the issue and sparked rows between EU member states.

At Wednesday's meeting with his Bavarian counterparts, Kurz welcomed the renewed focus on migration in Germany, saying it had brought "a new dynamic on the European level".

He offered a thinly-veiled criticism of Merkel's welcome of refugees, saying that those who opened the borders in 2015 "are responsible for the fact that we have border controls" between EU member states.

Kurz has also announced the formation of a controversial "axis" on migration between German Interior Minister Horst Seehofer -- from the CSU, his Austria's far-right interior minister Herbert Kickl and their new Italian counterpart Matteo Salvini, from the Northern League.

Thursday's meeting was hosted by Orban, who won a third consecutive term earlier this year after an election campaign dominated by anti-immigrant rhetoric.

On Wednesday Hungary's parliament passed a package of laws promised by Orban during the campaign which criminalise NGOs who offer help to refugees and migrants.

Spain's new Prime Minister Pedro Sanchez has struck more a liberal note on the issue than many of his counterparts. He allowed the Aquarius to dock in order to stave off a "humanitarian disaster".

His Socialist government has said it will restore public healthcare to foreigners without residence permits. He also wants to remove the barbed wire that tops the border fences of Ceuta and Melilla, the two Spanish enclaves in North Africa.

Sanchez's office said he would on Saturday embark on a European tour to meet leaders in Paris, Berlin and Lisbon, as well the Brussels meeting on Sunday and next week's full EU summit.