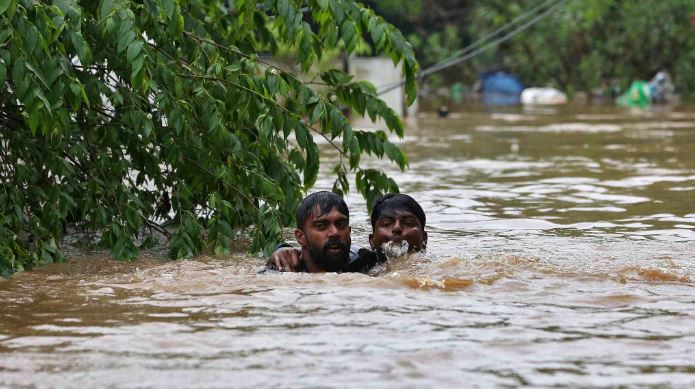 The worst floods to hit the Indian state of Kerala in more than a century have killed 164 people and forced more than 200,000 into relief camps, officials said on Friday, with more misery expected as heavy rain pushed water levels higher.

Kerala's government has described the crisis - one of the worst in decades - as "extremely grave" and rescue operations are underway to help thousands who remain trapped by floodwaters.

Prime Minister Narendra Modi was due to visit the southwest state later on Friday as its chief minister said he was hoping the military could step up help for the rescue effort which is already using dozens of helicopters and hundreds of boats.

"Some 16 Army teams, 28 Navy teams, 39 NDRF teams are involved in the relief and rescue operations. The NDRF has so far rescued 4,000 people. And by this evening, all marooned people will be saved," the chief minister said.

The state, famed for its palm-lined beaches and tea plantations, is always pommeled by the annual monsoon but this year's damage has been the most severe in almost a century.

Apart from the casualties, over 200,000 people have been displaced, and more than 10,000 km of roads and hundreds of homes have been destroyed or damaged across the state.

In a fresh statement, authorities have said that Kochi airport, one of the busiest in southern India, will remain shut till August 26.

"Kochi Airport operations are temporarily suspended up to 2 p.m. (local time) on August 26 due to very high flood situation and key essential facilities like runway, taxiway and apron are under submerged condition," an airport statement said.

The weather department has predicted more rains in the coming week and sounded a fresh alert. People living on river banks in the rain-hit districts have been asked to relocate, and fishermen have been urged not to venture into the Arabian Sea.

Officials said that several dams, particularly the Idukki dam, the biggest arch dam in Asia, have been opened to release excess water. All the shutters of the Idukki dam were opened last week for the first time in 26 years.

The state's chief minister had last week announced a compensation of 400,000 rupees ($5,600) to families of those killed in floods and rainslides who lost their loved ones, and up to one million rupees for those who have lost both their land and house.