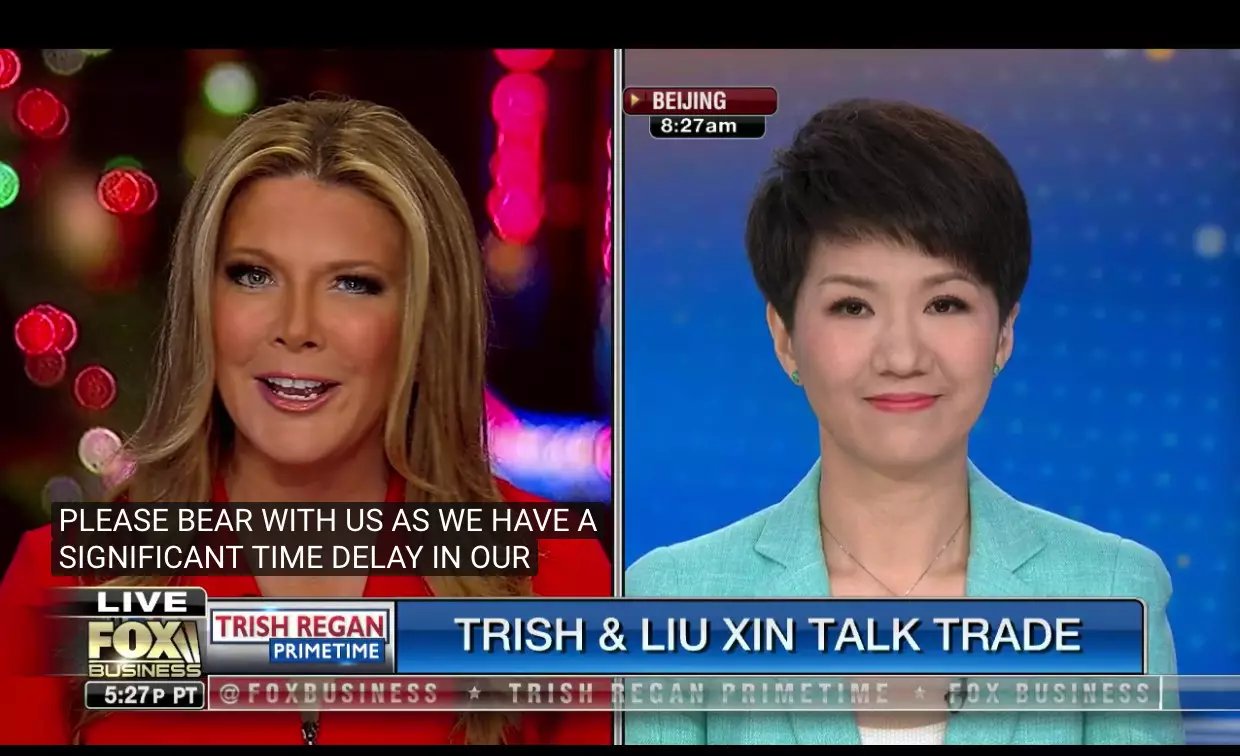 Liu Xin appeared on the "Trish Regan Primetime" show from the CGTN Beijing studio via satellite. This is the first face-off between the Chinese anchor and the American host, which was dubbed “the battle of the anchors” by the New York Times. The segment lasted 16 minutes, and tackled fair trade, intellectual property theft, Huawei, tariffs, China's developing country status, and so-called China’s "state capitalism".

Regan then asked Liu whether it is possible to reach a trade deal between China and the United States. Liu said she believes that there will be a good result if the US has sincerity and respects the Chinese negotiators, emphasizing that a trade war is not good for both sides.

Another intense moment came when the discussion turned to intellectual property rights. Regan told Liu there was “evidence that China has stolen enormous amounts of intellectual property”. Liu said that there is consensus among Chinese people that no country or individual can protect itself without IP protection. She also stressed that isolated cases do not mean “Chinese people are stealing”. “There are companies in the United States that sue each other all the time (over such issues).”Liu argued.

In response to Regan’s question if Huawei would be willing to share its advanced technology to gain access to the US, Liu replied that if it’s through cooperation, through mutual learning, and the United States plays according to the rules, she believed that there was no problem. “Why not? We all prosper because we learn from each other.” Liu said. “I think that’s fine so long as it’s not illegal.”

Regan also asked Liu about China’s developing country status. Liu replied that the overall size of China's economy is large, but China has a population of 1.4 billion, and its per capita GDP is less than one-sixth of the US.

Regan’s last question was about how to define China’s “state capitalism”. Liu explained that China is a market economy with Chinese characteristics, and China’s economy is quite mixed, very dynamic and very open as well. “According to statistics, 80% of Chinese employees work at private enterprises, 80% of exports are by private companies.” Liu stressed.

Regan closed the segment on a conciliatory note. “As I told Xin, no one wants a trade war,” she said, “but we have to think long and hard about the right next steps.”

Liu and Regan have been in a public back-and-forth on Twitter for about a week. Liu, speaking on her show, “The Point With Liu Xin,” accused Ms. Regan of “economic warmongering” and being “all emotion and accusation supported with little substance.” Regan responded on Twitter afterward by challenging Ms. Liu to a live debate on trade.

The debate of the anchors ended with polite and restrained exchange. Liu invited Regan to visit China and Regan happily agreed. After the debate, Regan twittered: “My thanks to Xin for joining me tonight to discuss the China-US trade relationship!”

A Twitter user named David commented on Regan’s latest post:”Two countries work together and find the common ground. It will be good for both and for the world. As Warren Buffett mentioned, both countries will be superpowers in the next 100 yrs.”

Another Twitter user name Shee Chin said: “Hope there will be more discussions like this in the future, communication is the best way to understand and to break prejudices. It’s good that both side reach an agreement that a trade war isn’t the best solution.”