WORLD Challenged on all fronts, Britain's May faces pressure over Brexit law

Challenged on all fronts, Britain's May faces pressure over Brexit law 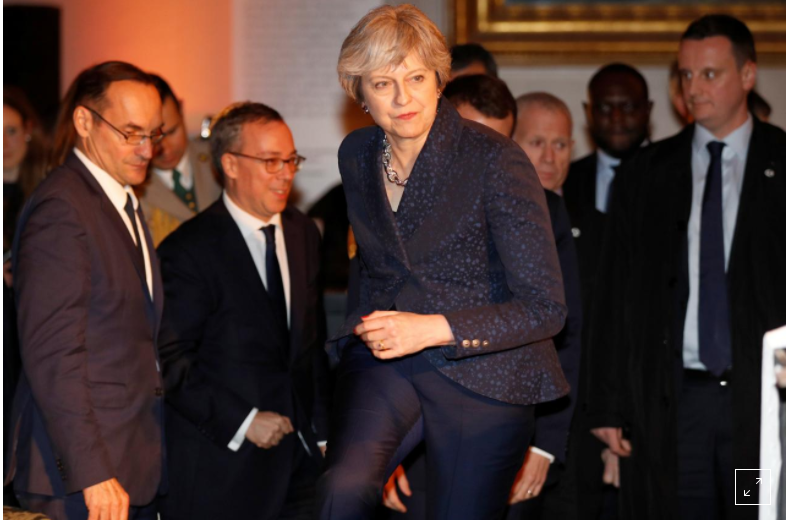 British Prime Minister Theresa May came under further pressure over her Brexit blueprint on Monday, with members of the upper house of parliament saying there were “fundamental flaws” in a law crucial to the departure.

The law has also deepened splits in her Conservative Party, which has for years been divided over Britain’s relations with the European Union.

It is yet another battle for a weakened prime minister whose leadership is being questioned after scandals within her party, gaffes and an ill-judged election that lost her party its majority in parliament.

Facing calls to ax her finance minister, who favors a gentle Brexit, and criticism over a lack of big ideas to revive the fortunes of the Conservatives, May needs to drive through legislation to sever ties with the EU before March next year.

The largely pro-EU House of Lords, which will start debating the European Union (Withdrawal) Bill on Tuesday, have made no secret of their opposition to the legislation which they say amounts to little more than a power grab by the government.

It is designed to put current EU legislation into British law essentially in one move, allowing for changes later.

“We acknowledge the scale, challenge and unprecedented nature of the task of converting existing EU law into UK law, but as it stands this bill is constitutionally unacceptable,” said Ann Taylor, head of the influential Constitution Committee.

“The bill grants ministers overly-broad powers to do whatever they think is ‘appropriate’ to correct ‘deficiencies’ in retained EU law,” the committee said in a report.

While many peers are opposed to the legislation, the House of Lords is not expected to veto the law after it was passed in the lower house of parliament.

But more criticism over what even some government officials say was a hastily created bill to “copy and paste” EU rules and regulations into British law by the time it leaves the bloc next year underlines the size of the task facing May.

In Brussels, EU ministers, whose unity in the negotiations has amplified the arguments in Britain, are due to formally endorse its guidelines for a transition period that will leave the relationship largely unchanged.

But even with both sides mostly in agreement over the transition period bar a few questions over citizens rights and trade agreements, May faces criticism by Brexit campaigners for bowing to EU demands and accepting the status quo.

Since being appointed prime minister shortly after the “Remain” side, which she backed, lost a referendum on EU membership in June 2016, May’s style of leadership has been increasingly challenged by her party, which is losing support at a time when the opposition Labour Party is enjoying record levels of members.

Her spokesman defended the prime minister’s record, saying she had not only won an agreement with the EU to move onto the second phase of negotiations on future ties, she had also boosted housebuilding, education standards and health funding.

Brexit campaigners have aired their concerns that May is delivering a Brexit in name only, while EU supporters accuse her of putting the party’s interests above those of the country in the talks to end more than 40 years of membership in the bloc.

Talk of ousting her has grown louder in recent days, with local media reporting that more lawmakers are supporting a no-confidence motion against her.

But several lawmakers asked by Reuters say her removal is a risky strategy for the party, which is divided down the middle over Brexit. The promotion of either side’s representatives to the top post could trigger mutiny.

“There were times last year for the prime minister to step aside - immediately after the June 2017 election, or after Party Conference. That didn’t happen. Maybe the Cabinet should have asked her to go, but they didn‘t,” said Nicky Morgan, education minister under May’s predecessor, David Cameron.

“Even more importantly, we are now into a critical nine months for the future of the country, so the cabinet need to get a grip by acting collectively to shape Brexit and agree an ideal end-state based in reality, on what parliament will approve eventually - and then stick to it.”