Challenges remain in delivery of aids to quake-hit southern Haiti 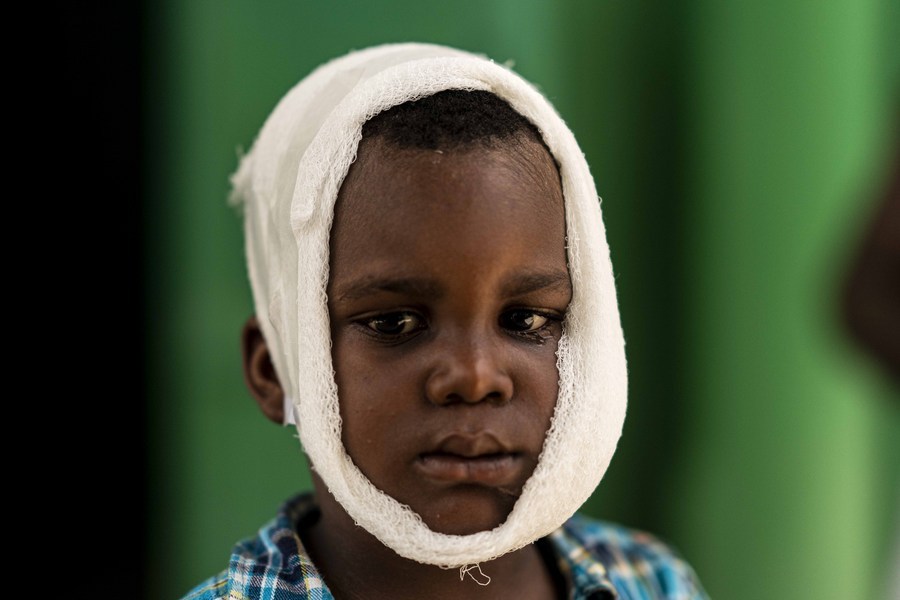 LES CAYES, Haiti, Aug. 23 (Xinhua) -- A week after the powerful earthquake rattled Haiti, humanitarian aids from international organizations and countries poured in but their delivery to remote areas were hindered by complex situations.

On Aug. 14, Haiti was hit by a 7.2-magnitude earthquake, one of the strongest ever to hit the country, leaving at least 2,189 dead and over 12,000 injured, according to the country's Civil Protection Directorate.

The situation in Haiti is tragic, said Deputy Secretary-General of the United Nations Amina Mohammed, who arrived at the site on Friday, referring to the huge damage and loss of life.

Over the past week, various international organizations and countries have expressed condolences to the victims of the devastating quake and offered humanitarian assistance to support Haiti.

The Mexican government on Friday sent a second shipment of aid to Haiti with 20 tons of food and medicine to help with recovery, in addition to the 19 tons of relief aid Mexico sent at the beginning of the week.

Outside the Les Cayes airport, Haiti, the noise of morning traffic was interrupted by helicopters landing and taking off, unloading humanitarian aid.

A representative of an organization that have sent aids told Xinhua that most of the donations are medical supplies, probably the most necessary assistance at the moment, as many hospitals have been damaged or destroyed, while those still operating are completely overwhelmed, lacking sufficient personnel and medical supplies.

However, it is challenging to deliver aids to the remote quake-hit communities as the roads leading to those areas were often flooded or covered by debris from the landslides left by the earthquake.

Hector Mendez, a member of Mexico's famed Topos Azteca Rescuers Association, said he was surprised that so far few of the quake-hit areas have received international support from groups like his, especially since dozens of global organizations and foundations are supposedly already in Haiti.

The terrain and limited means of transport has rendered delivery of already scarce aid difficult.

In addition, Haiti's hardest-hit southern peninsula is a "hotspot for gang-related violence," where humanitarian workers have been attacked, further complicating aid efforts, the U.N. Office for the Coordination of Humanitarian Affairs said.

"Access is very complex due to the gangs that control the road and vast parts of the country," said the office.

Rescue and aid work has been further complicated by Tropical Storm Grace, which threatened to dump more than 25 cm of rainfall over the areas hardest hit by the earthquake and is likely to trigger flash floods and mudslides.

Fortunately, some of those places that became difficult to access have received supports to alleviate the situation.

In Les Anglais, south of Les Cayes, 80 km from the epicenter, the Immaculate Conception Church collapsed during the earthquake, killing at least 19 people.

Personnel from Wenling Hongyuan Traffic Engineering Haiti S.A., a Chinese company, arrived at the site with construction vehicles, rescuing a survivor and recovering the remains of 13 victims.

After cleaning up the rubbles from the church, they also helped remove debris from the area where a landslide had occurred on the road to Les Cayes.

A group of local residents, who traveled to the capital city of Port-au-Prince to gather aids, found difficulty on their way back to the Les Cayes region, since the vehicle in which they are traveling may not be able to take them safely cross the river.

A vehicle of a non-governmental organization appeared and offered to take the group, helping them reach their destination safely.

Encouraged by the support, local residents expressed their appreciation to those who come to assist.

A local man drenched by the sudden rain said that they understood that it took great efforts to reach such a remote place, and they feel enormous gratitude for all who are supporting them.

"And this disaster coincides with political instability, rising gang violence, alarmingly high rates of malnutrition among children, and the COVID-19 pandemic," Fore said.