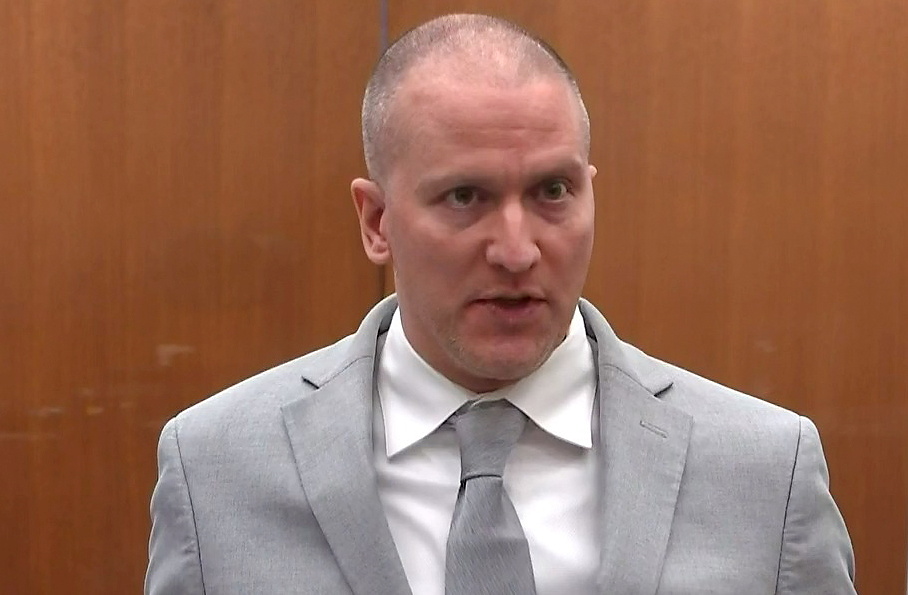 Former Minneapolis police officer Derek Chauvin addresses his sentencing hearing and the judge as he awaits his sentence after being convicted of murder in the death of George Floyd in Minneapolis, Minnesota, US June 25, 2021 in a still image from video. (Photo: Agencies)

Derek Chauvin, the former Minneapolis police officer convicted of murdering George Floyd, was sentenced to 22 and one half years in prison on Friday by a Minnesota judge, potentially closing a case that sparked nationwide protests against police brutality and systemic racism.

The sentence by Hennepin County Judge Peter Cahill was 10 years more than the recommended guidelines but less than the 30-year prison term prosecutors requested.

Chauvin was found guilty of second-degree murder, third-degree murder and second-degree manslaughter in April following an emotional and tense trial in Minneapolis. He was sentenced only on the most serious charge with the state's sentencing guidelines recommending that he should face 12 and a half years.

Prosecutors requested a 30-year prison term while defense lawyers asked for a sentence of probation and time served. However, Cahill had already found that aggravating factors in Floyd's death, such as Chauvin's position of authority and the presence of children, warrant more jail time.

Chauvin, who has been in a maximum-security prison since April, is widely expected to appeal. Along with three other fired officers who have yet to have their state trials, Chauvin is also facing a federal indictment for violating George Floyd's civil rights that could add prison time.

Hours before he sentenced Chauvin, Cahill denied a defense attorney's request for a new trial for Chauvin.

Eric Nelson, Chauvin's attorney, filed a motion claiming the former Minneapolis police officer was deprived of his Constitutional right to a fair trial, but Cahill said Nelson failed to prove any of the allegations.

On 25 May last year, Chauvin was recorded kneeling on Floyd's neck for nearly nine minutes while he pleaded for air and lost consciousness Chauvin knelt on Floyd's death was captured on a widely seen video.

Minneapolis has been on edge since Floyd's death and the fatal police shootings of Daunte Wright during Chauvin's trial and Winston Smith Jr., a 32-year-old Black father of three, on June 3.