CHICAGO (AP) — Four years after he fired 16 bullets into a black teenager, three years after dashcam video of the shooting was released and three weeks after his murder trial began, Jason Van Dyke's transformation from Chicago patrol officer to convicted felon came suddenly.

A clerk announced the jury's decision. The judge revoked his bond. And Van Dyke, the first city officer in about a half century to be convicted of murder in an on-duty shooting, put his hands behind his back as if handcuffed and strode across a courtroom into custody.

The scene Friday was a quiet coda to the tension that erupted after the video was made public in November 2015. The shocking footage showed Laquan McDonald crumpling to the ground as the officer fired repeatedly at the teen, who was walking away from police. The video drew nationwide outrage and put the nation's third-largest city at the center of the debate about police misconduct and the use of force. 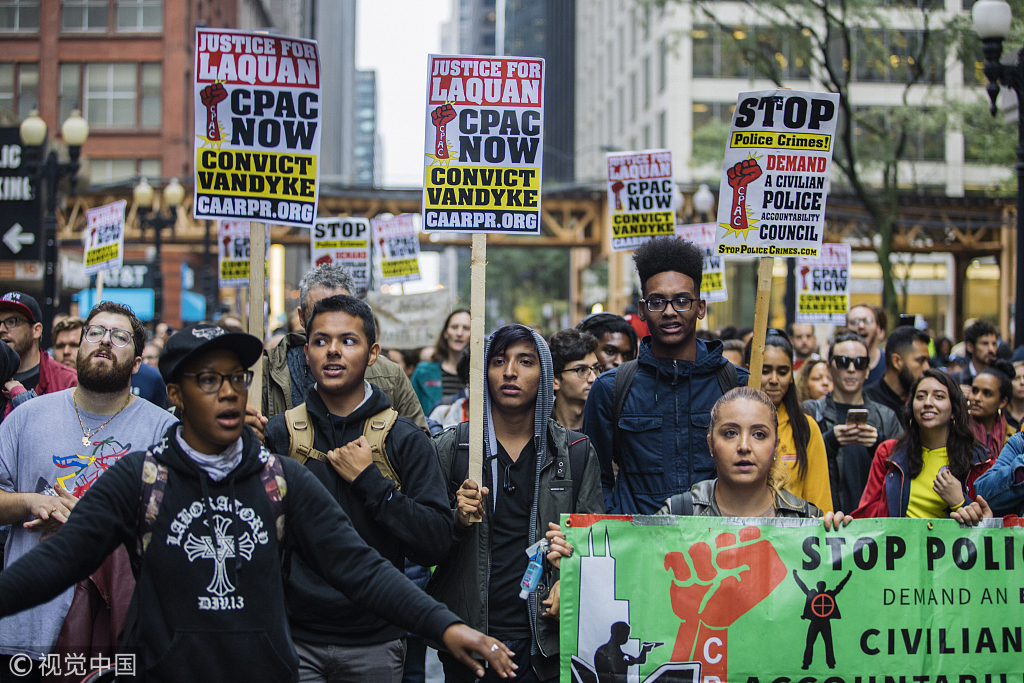 Demonstrators protest as they celebrate the verdict in the murder trial of Chicago police officer Jason Van Dyke along Michigan Avenue on October 5, 2018 in Chicago, Illinois. Sentencing will take place on October 31, 2018. (Photo: VCG)

The magnitude of the conviction for second-degree murder was inescapable as Van Dyke walked out of sight of his family and McDonald's relatives.

"This verdict provides validation and a sense of justice for many residents of Chicago and Cook County and beyond this area ... the African-American communities across our country," special prosecutor Joseph McMahon said after the verdict was read.

The choice of second-degree murder reflected the jury's finding that Van Dyke believed his life was in danger but that the belief was unreasonable. The jury also had the option of first degree-murder, which required finding that the shooting was unnecessary and unreasonable. A first-degree conviction, with enhancements for the use of a gun, would have carried a mandatory minimum of 45 years.

Second-degree murder usually carries a sentence of less than 20 years, especially for someone with no criminal history. Probation is also an option. Van Dyke was also convicted of 16 counts of aggravated battery — one for each bullet.

One legal expert predicted that Van Dyke will be sentenced to no more than six years total. But because he's an officer, it will be "hard time," possibly spent in isolation, said Steve Greenberg, who has defended clients at more than 100 murder trials.

McDonald, 17, was carrying a knife when Van Dyke fired at him on a dimly lit street where he was surrounded by other officers.

Defense attorney Dan Herbert called Van Dyke "a sacrificial lamb" offered by political and community leaders "to save themselves." He said it was a "sad day for law enforcement" because the verdict tells officers they cannot do their jobs.

A McDonald family spokesman thanked prosecutors for pursuing a case that, he said, many black attorneys did not believe could be won.

"I can't rejoice because this man is going to jail," said McDonald's uncle, the Rev. Marvin Hunter. "I saw his wife and father. His wife and daughter didn't pull the trigger. I could see the pain in these people. It bothered me that they couldn't see the pain in us."

The 12-person jury included just one African-American member, although blacks make up one-third of Chicago's population. The jury also had seven whites, three Hispanics and one Asian-American.

Jurors said they spent much of their deliberations discussing whether to convict on first-degree or second-degree murder, not an acquittal. They said Van Dyke's testimony did not help him. One woman said he "messed up" and should not have testified. Another said Van Dyke needed to "contain the situation, not escalate it."

The jurors' names were not made public during the trial and were not disclosed Friday during interviews with reporters at the courthouse.

On the night of the shooting, officers were waiting for someone with a stun gun to use on the teenager when Van Dyke arrived, according to testimony and video. The video, played repeatedly at trial, showed him firing even after the teen lay motionless on the pavement.

Prosecutors and defense attorneys clashed over what the footage actually proved.

During closing arguments, prosecutor Jody Gleason noted that Van Dyke told detectives that McDonald raised the knife and that McDonald tried to get up off the ground after being shot.

But Van Dyke and his attorneys maintained that the video did not tell the whole story.

His attorneys portrayed the officer as being scared by the young man who he knew had already punctured a tire of a squad car with the knife. Van Dyke testified that the teen was advancing on him and ignoring his shouted orders to drop the knife.

Van Dyke conceded that he stepped toward McDonald and not away from the teen, as he had initially claimed. But the officer maintained the rest of his account.

"The video doesn't show my perspective," he said.

In his 13 years on the force, Van Dyke was the subject of at least 20 citizen complaints — eight of which alleged excessive force, according to a database that includes reports from 2002 to 2008 and 2011 until 2015.

Though he was never disciplined, a jury did award $350,000 to a man who filed an excessive-force lawsuit against him. Van Dyke testified that McDonald was the first person he ever shot.

To boost their contention that McDonald was dangerous, defense attorneys built a case against the teenager, who had been a ward of the state for most of his life and wound up in juvenile detention after an arrest for marijuana possession. They also pointed to an autopsy that showed he had the hallucinogen PCP in his system.

Prosecutors stressed that Van Dyke was the only officer ever to fire a shot at McDonald.

They called multiple officers who were there that night as they sought to chip away at the "blue wall of silence" long associated with the city's police force and other law enforcement agencies. Three officers, including Van Dyke's partner that night, have been charged with conspiring to cover up and lie about what happened to protect Van Dyke. They have all pleaded not guilty.

Even before the trial, the case affected law enforcement in Chicago. The city's police superintendent and the county's top prosecutor both lost their jobs — one fired by the mayor and the other ousted by voters. It also led to a Justice Department investigation that found a "pervasive cover-up culture" and prompted plans for far-reaching police reforms.

A week before jury selection, Mayor Rahm Emanuel announced he would not seek a third term, although his office insisted the case had nothing to do with his decision. He faced criticism that he fought the release of the video until after his re-election in April 2015.

Ahead of the verdict, the city prepared for the possibility of the kind of massive protests that followed the release of the video, with an extra 4,000 officers being put on the streets.

Schools and businesses braced for potential unrest, and people across the city paused in the middle of the day to listen for the jury's decision. In the end, the response was muted, with a few hundred protesters marching peacefully through the downtown Loop.

The issue of race permeated the case, though it was rarely raised at trial. One of the only instances was during opening statements, when McMahon told the jurors that Van Dyke didn't know anything about McDonald's past when he encountered him that night.

What Van Dyke saw "was a black boy walking down the street ... having the audacity to ignore the police," McMahon said.

Herbert countered, "Race had absolutely nothing to do with this."