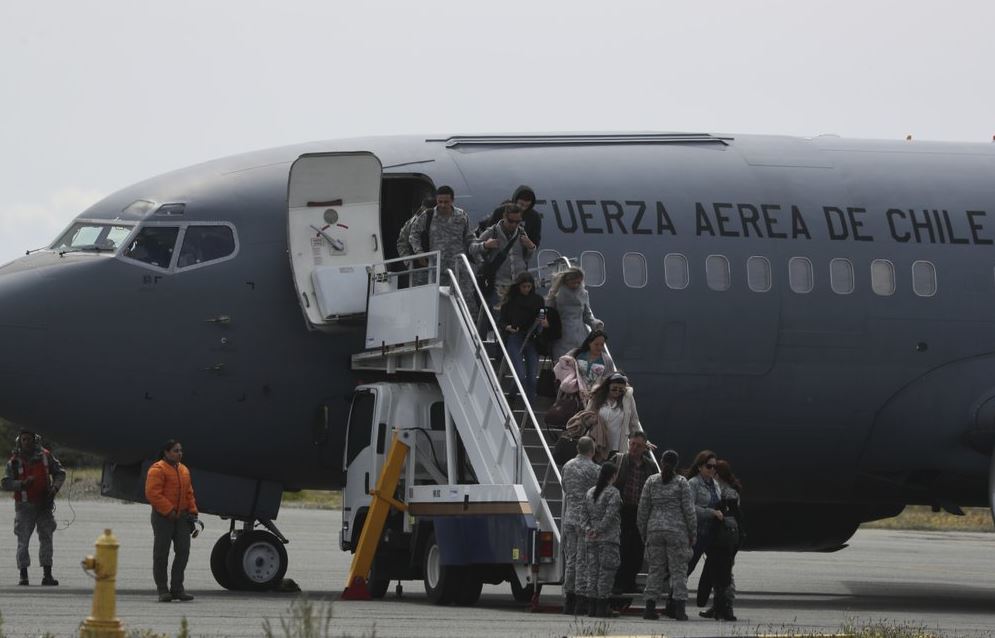 Relatives of passengers of a missing military plane arrive in a Chilean military airplane to an airbase in Punta Arenas, Chile, Wednesday, Dec. 11, 2019. (Photo: AP)

Debris believed to be from a military transport plane carrying 38 people that vanished days earlier en route to Antarctica has been discovered in the treacherous waters of Drake’s Passage, Chile’s Air Force said Wednesday.

The debris will be analyzed to see if it corresponds to the missing plane, he said, adding that the process could take up to two days.

The C-130 Hercules took off Monday afternoon from a base in far-southern Chile on a regular maintenance flight for an Antarctic base. Radio contact was lost 70 minutes later.

The debris was spotted by a private plane assisting in the search, and officials said a Brazilian plane in the area equipped with instruments will next scan 3,200 meters (10,499 feet) under water at the site.

The discovery came as Chilean officials they had expanded the search for the missing military plane, scanning an area of roughly 70,000 square miles.

Mosqueira said the search area covered an area of about 400 by 450 kilometers (250 by 280 miles) and he said improved visibility was helping the crews of searchers using planes, satellites and vessels from Argentina, Brazil, Uruguay and the US as well as Chile.

The search area extends over treacherous waters of Drake’s Passage between the tip of South America and Antarctica. The plane was carrying 17 crew members and 21 passengers, three of them civilians.

Ed Coleman, a pilot and chair of the Safety Science Department at Embry-Riddle Aeronautical University in Prescott, Arizona, said rapidly changing weather in the Antarctic makes it a difficult place for pilots.

“You can have a clear sky one minute, and in a short time later storms can be building up making it a challenge,” he said. “That causes bigger swells and rougher air.”

The inhospitable Antarctic is equally formidable to rescuers, who have to respond quickly to pull any survivors from the cold, rough waters, he said.