WORLD Chile leader Pinera says will not resign over protests

Chile leader Pinera says will not resign over protests 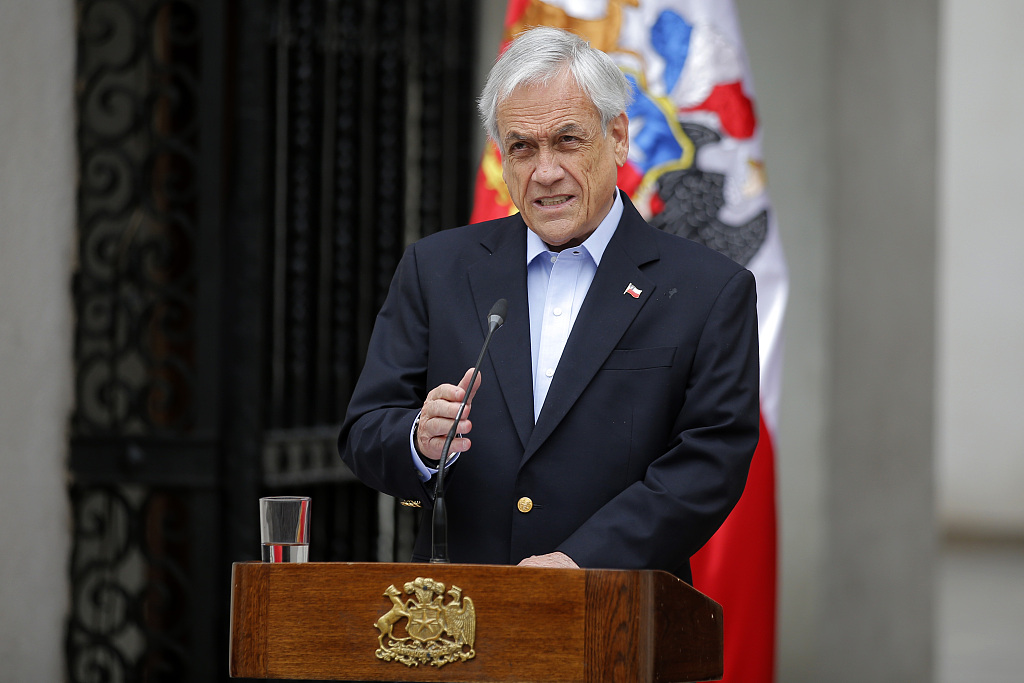 Chilean President Sebastian Pinera said Tuesday he will not resign in the face of deadly protests over inequality and poor social conditions that have entered their third week.

Asked by the BBC in an interview whether he will step down, the billionaire conservative leader said: "No."

"These problems have been accumulating for the past 30 years," Pinera said. "I am responsible (for) part of it and I assume my responsiblity, but I'm not the only one."

Fresh clashes broke out Tuesday, adding to the violence gripping one of Latin America's most prosperous countries. It has forced the government to cancel two major international economic and climate summits and open talks with the leftist opposition.

Thousands of protesters took the streets in the capital, and in the southern cities of Concepcion and Vina del Mar, west of Santiago.

Police firing birdshot injured two students among a group trying to overrun a public high school in Santiago, police said. The students were treated at a hospital and released.

This month's showpiece Copa Libertadores final will now be held in the Peruvian capital Lima, soccer authority CONMEBOL said after meeting in Paraguay.

"The choice is based on the offer of the government of Peru, and on the security guarantees it has given," it said in a statement.

Prosecutors say 20 people have died in unrest since the protests began here on October 20.

In his interview, Pinera defended his decision to declare a state of emergency but promised to look into allegations of police violence and abuse.

The interview came as the president announced a package of measures for small and medium-sized businesses hit by the unrest.

Some 6,800 companies affected by rioting, looting and fires will benefit from financial aid and tax deductions.

Demonstrators and riot police clashed again in the capital Santiago on Tuesday, when around 2,000 people gathered in the capital.

The protests and violence were on a smaller scale to Monday's huge rally marking the beginning of a third week of protests in Santiago.

On Monday, tens of thousands of people gathered in the Plaza de Italia, the epicenter of the unrest over economic inequality and a raft of other social woes, and tried to march on the presidential palace in downtown Santiago.

Fights broke out with police trying to contain them, with officers firing water cannon and tear gas. One officer was hit in the face with a Molotov cocktail.

Looting and vandalism were reported in the cities of Vina del Mar, Valparaiso and Concepcion.

Protesters organized rallies on Monday under the slogan "This is not over."

Some citizens returned to work despite vandalism that has damaged the underground train network.

"There are many alleged complaints about excessive use of force and if that took place I can guarantee you that it will be investigated," Pinera said.

"There will be no impunity," he said, defending the stepped up security measures as "democratic and constitutional."

Pinera held inconclusive talks with opposition parties last week but made no reference to them in segments of the interview aired by the BBC.

Protesters are calling for constitutional reform. Chile's current constitution dates back to the 1973-1990 dictatorship of General Augusto Pinochet.

A survey by pollster Cadem published on Sunday indicated that 87 percent of Chileans favored such reforms.

The study indicated Pinera's approval rating had plunged to 13 percent.

The government said Chile's economy grew three percent in September but it forecast a contraction of 0.5 percent in October due to the unrest.