WORLD Chile's Pinera to crack down on vandals, looters amid unrest

Chile's Pinera to crack down on vandals, looters amid unrest 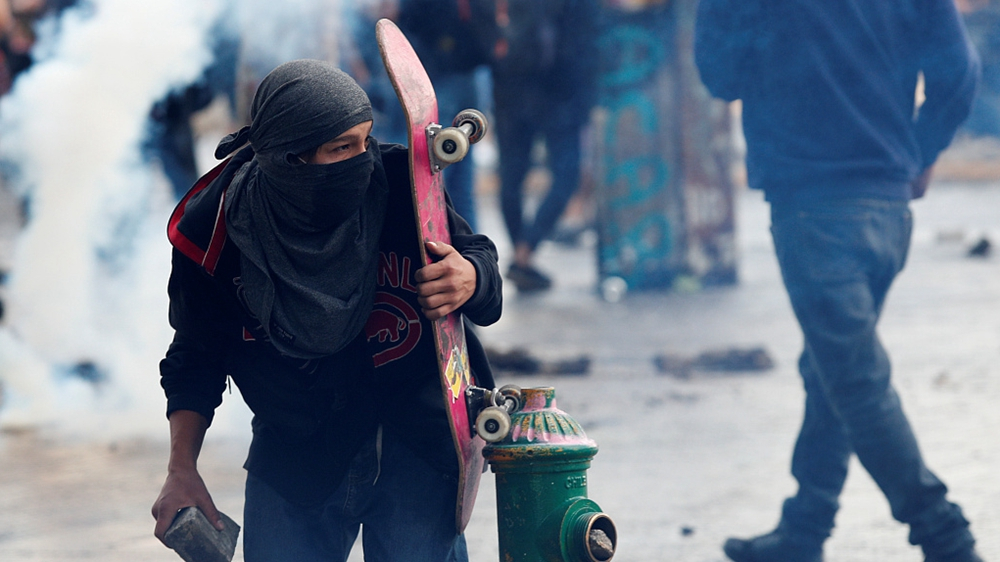 A protester holds a brick during an anti-government protest in Santiago, Chile, November 5, 2019. (Photo： VCG)

Chilean President Sebastian Pinera announced a series of measures on Thursday to tighten security and increase penalties for vandals as ongoing riots, looting and violence have left at least 20 dead over two weeks of protests.

Pinera said he would send bills to Chile's congress to toughen penalties against looting, violence and destruction committed during protests. The penalties would increase if the acts are carried out by hooded vandals trying to hide their identities.

Chile's worst unrest since 1990 has wrought more than 1.5 billion U.S. dollars in damage to businesses and hobbled Santiago's metro system, once the envy of Latin America. Vandals have looted hundreds of grocery stores, left much of the downtown painted over in graffiti and set fire to buildings.

Pinera said he would combat the work of "criminals" by beefing up intelligence-gathering activities, including more than doubling to 17 the drones used in Santiago for aerial surveillance.

"One of the principal responsibilities of the state is to ensure public order and security," said Pinera, adding that his administration showed full support for police and security forces in Chile.

The political opposition in Chile immediately pounced on Pinera's announcements. Jorge Sharp, the left-leaning mayor of the port city of Valparaiso, said on Twitter that Pinera had missed the point.

The protests since October 14 have already led to more than 7,000 arrests, and injuries to 1,659 protesters and 800 police officers, according to authorities.

The unrest has grown less violent in recent days but has shown little signs of subsiding.

On Wednesday evening, hooded vandals attacked several shops, cafes and the headquarters of a right wing political parties in one of Santiago's more upscale neighborhoods.