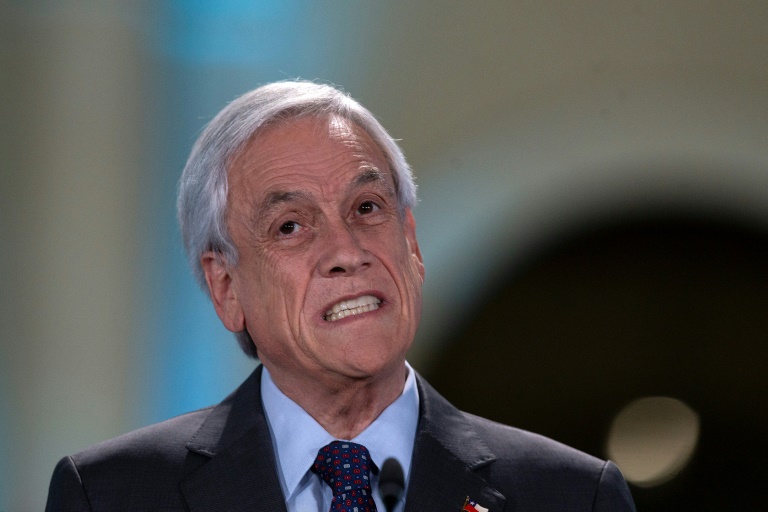 President Sebastian Pinera condemned on Sunday for the first time what he called abuses committed by police in dealing with four weeks of violent unrest that have rocked Chile.

"There was excessive use of force. Abuses and crimes were committed, and the rights of all were not respected," the president said in a speech to the nation as it marked a month of turmoil that has left 22 people dead and more than 2,000 injured.

Furious Chileans have been protesting social and economic inequality, and against an entrenched political elite that comes from a small number of the wealthiest families in the country, among other issues.

Accusations of police brutality and human rights violations have been leveled since the protests broke out, prompting the United Nations to send a team to investigate. Amnesty International has also sent a mission.

The crisis is Chile's biggest since its return to democracy in 1990 when long-time dictator General Augusto Pinochet yielded to democracy.

More than 200 of those injured have sustained serious eye injuries, some even going blind in one eye, after being shot by police.

Pinera praised an agreement reached last week under which Chile will draft a new constitution to replace the current one that dates back to the dictatorship of Pinochet, who ruled from 1973 to 1990.

Many in Chile see this step -- getting rid of a charter that smacks of a dark, repressive chapter in the country's past -- as a way to help end the crisis. It is a key demand of the thousands of protesters that have been taking to the streets in Santiago and elsewhere almost daily for a month.

The current constitution has been changed numerous times but does not establish the state's responsibility to provide education and health care.

"If the people want it, we will move toward a new constitution, the first under democracy," Pinera said in a speech from the presidential palace.

The spasm of anger began with a rise in metro fares but quickly swelled into a broader outcry against the status quo in what is traditionally considered one of South America's most stable countries.

Chilean lawmakers agreed Friday to hold a plebiscite in April 2020 after hours of intense negotiations between the governing coalition and opposition parties.

Thousands still took to the streets of Santiago later in the day, crowding into the protest epicenter of Plaza Italia, and violent clashes broke out between small groups of protesters and police late Friday afternoon.

The referendum will ask voters whether the constitution should be replaced and if so, how a new charter should be drafted.

"In the last four weeks, Chile has changed. Chileans have changed. The government has changed. We have all changed," said Pinera during his speech Sunday.

"The social pact under which we lived has broken."

Pinera assured the country, though, that "the outcome of these four weeks is not yet written," and that several social agreements still need to be determined, including reforming the pension system.

A survey published Sunday by the consulting firm Cadem revealed an increase in Pinera's popularity over the last week, rising to 17 percent from 13 percent at the protests' height.

The survey also indicated that 67 percent of Chileans are in favor of a new constitution.