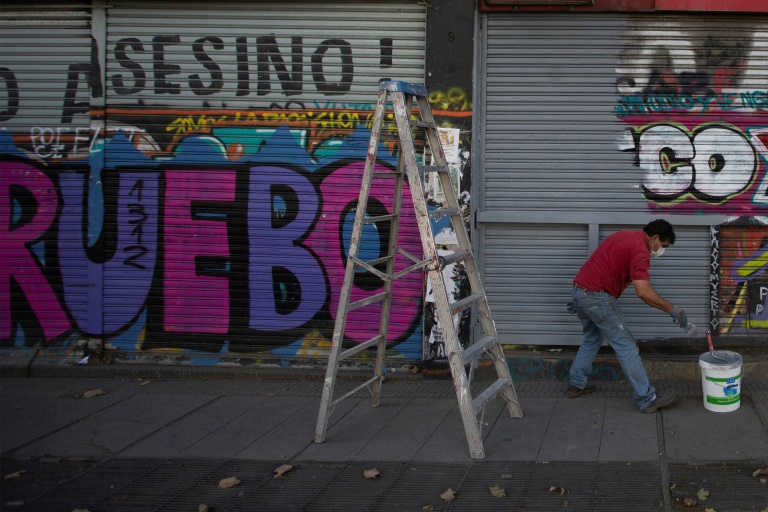 Chile's social unrest that exploded in October exposed deep frustrations over inequality and the cost of living. (Photo: AFP)

Six months after the largest social unrest in 30 years broke out, the streets of Chile are calm once again as the coronavirus pandemic forces the country into lockdown.

But experts say the underlying frustration and social inequality that sparked the mass demonstrations have not disappeared and are merely simmering under the surface, potentially ready to explode again once virus measures are lifted.

A mass movement against President Sebastian Pinera and his government erupted on October 18, initially triggered by a modest rise in metro fares in Santiago before mushrooming into general dissatisfaction with the cost of living and a system that seems to benefit the rich at the expense of all others.

For the last month, though, the epicenter of the protests in Santiago's Plaza Italia, as well as other hotspot cities such as Valparaiso and Concepcion, have gone cool with the population barred from heading outside to prevent the spread of the deadly COVID-19 disease.

"The problems, whose public expression is currently suspended, are still there," Patricio Zapata, a constitutional lawyer and member of the opposition Christian Democratic Party, told AFP.

Faced with a health crisis that has left more than 110 dead and over 9,200 infected, Pinera actually has the wind in his sails.

His approval rating plunged to less than eight percent in January -- with weekly protests raging – but has climbed again to almost 20 percent.

The good news may not last, though.

"We're in something like a parenthesis, and there's the chance that after the parenthesis, things will return to a similar situation" that existed before the unrest erupted, said Juan Pablo Luna, a professor in the political science institute at the Catholic University of Chile.

But "that will only happen if the consequences of the crisis are such that the people prefer to postpone their demands in order to satisfy basic needs in economic terms," said Luna.

The inescapable economic downturn that the pandemic will wreak led the International Monetary Fund to warn that countries such as Chile, Ecuador or France "remain vulnerable to new protests, particularly if policy actions to mitigate the COVID-19 crisis are perceived as insufficient or as unfairly favoring large corporates rather than people."

Despite Pinera's upturn in popularity, the virus pandemic will likely highlight the very inequality that fueled protests in a country whose health, education and pension sectors have been largely privatized since the Augusto Pinochet dictatorship from 1973-1990.

"It seems to me that the crisis management will probably unveil new structural problems, like inequality, and in that case, it seems obvious that the coronavirus will end up... hurting the government and provoking a new round of unrest," said Luna.

For Zapata, Pinera's political future looks shaky: "I can't see how he can regain the majority's trust," he said.

Many accuse millionaire 70-year-old businessman Pinera of being out of touch with the poor and middle classes in a country that posts impressive macroeconomic figures that mask a low average wage, high costs of basic services and the privatization of a huge part of its health and care sectors.

Pinera has been widely criticized not just for those imbalances but also for his management of the unrest, while the security services were accused of abuses by human rights groups.

He then scored another own goal when, during the mandatory quarantine, he stopped a convoy of official vehicles on Plaza Italia to take a picture in the now deserted protest epicenter.

"He's always committing unforced errors... and it will take a lot for the people to regain trust in the government," said Luna.

Pinera's popularity had been starting to recover in part due to a decision to hold a referendum on changing the dictatorship-era constitution, which had to be postponed from April 26 to October 25 due to the virus.

But he remains in the eye of a temporarily paused storm.

"I want this chapter to end so we can return to uniting for change politically, of the constitution, (with) everyone healthy for October," said Maria Jose Gutierrez, a 30-year-old activist and supporter of constitutional change.

Zapata is unsure which way the crisis will affect the people.

It might "galvanize the forces of dialogue and cooperation, enabling great agreements," said Zapata.

Or the subsequent economic downturn, "added to the discovery that the health crisis hit the poor and excluded sectors much harder, will generate a stronger, including more violent, return to social protests."