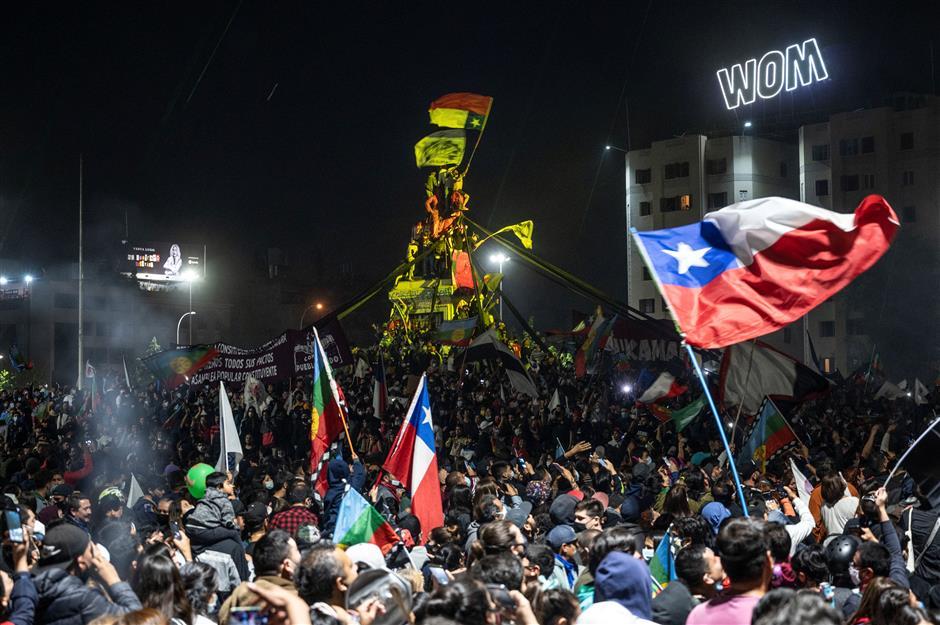 Demonstrators supporting the reform of the Chilean constitution celebrate the referendum official results at the Plaza Italia square in Santiago on Sunday. (Photo: agencies)

Amid a time of coronavirus and turmoil, Chileans turned out on Sunday to vote overwhelmingly in favor of rewriting the constitution to promote greater equality and social justice.

The plebiscite was allowed after the outbreak of vast street protests that erupted a year ago over inequality in pensions, education and health care, problems that have long been troubling Chile, one of South America’s most developed nations.

It was initially scheduled for April 26, but postponed due to the coronavirus pandemic.

Voters were required to wear a face mask, abide by social distancing rules at polling centers and bring their own pencil to mark the ballot.

The Electoral Service said that with nearly all polling stations reporting, about 78 percent of the 7.4 million votes counted favored drawing up a new constitution, while just under 22 percent were opposed.

In a speech to the country, President Sebastián Piñera acknowledged the victory for those seeking a new charter but cautioned it is only the start of a long process.

“It is the beginning of a path, which together we will have to go through to agree on a new constitution for Chile.”

He had opposed having a new constitution although conceded earlier in the day that it likely would be supported by voters.

The special convention would begin drafting a new constitution that would be submitted to voters in mid-2022.