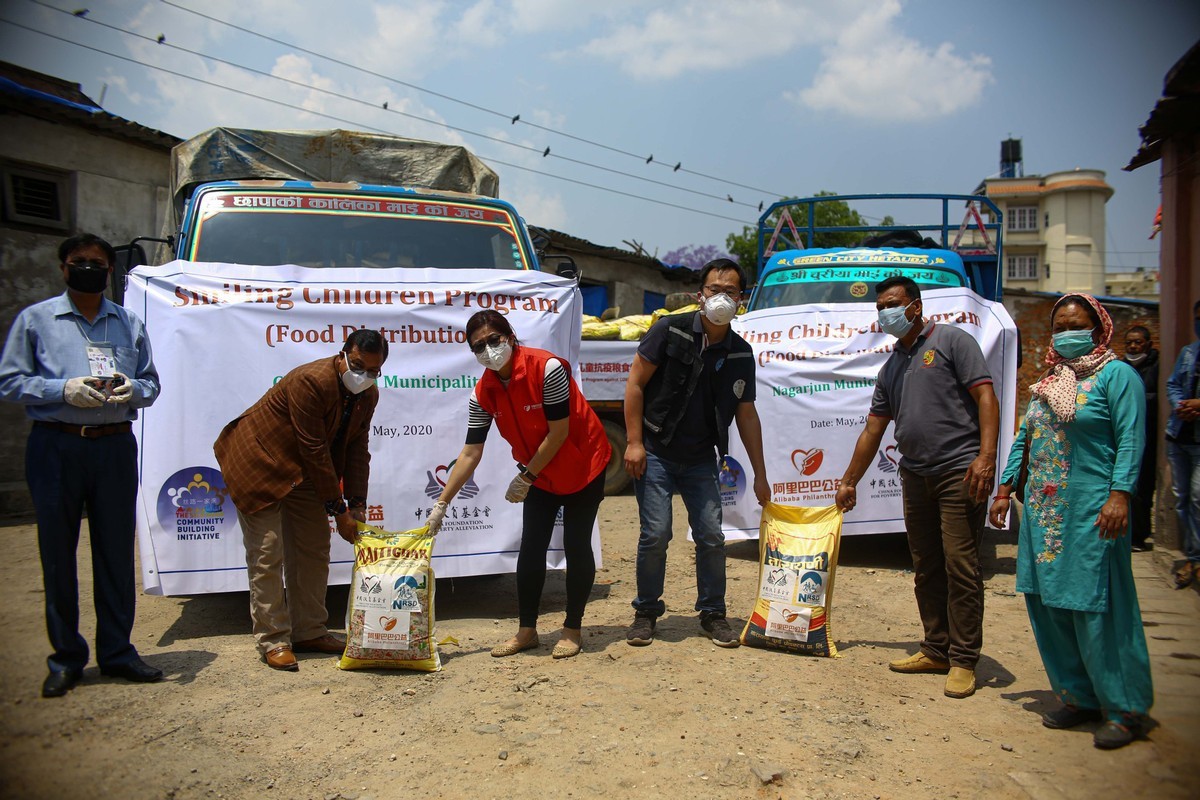 The staff of the Nepal office of the China Foundation for Poverty Alleviation donate food packages to students' parents in Kathmandu, Nepal on May 14, 2020. [Photo/Xinhua]

The experience of Chinese social organizations in poverty elimination has not only helped improve the wellbeing of Chinese people, but also benefited people in other countries, experts at an international event said.

A webinar, on the theme Contribution of Social Organizations to International Development, was a parallel event to the ongoing 45th session of United Nations Human Rights Council. The video conference was held on Wednesday.

The Declaration on the Right to Development, adopted by the UN in 1986, stated that the right to development is "an inalienable human right", and China has made remarkable achievements in ensuring the right is realized, both in and outside the country, said Chen Hongtao, standing deputy secretary-general of the China Foundation for Poverty Alleviation, or CFPA.

According to official statistics, the CFPA, established in 1989 and one of the largest NGOs in China, had supported more than 40 million people in the country by the end of 2019.

The CFPA has also devoted its efforts to international development since 2005. Chen said the organization has carried out work in 24 countries and regions, spending over 200 million yuan and benefiting more than 900,000 people.

In Ethiopia, for example, the CFPA cooperated with Ye Enat Weg Charitable Association, a local NGO, and launched the Smiling Children School Feeding Program in 2015.

The program aims to reduce hunger by providing free breakfast and lunch at school for Ethiopian children from poor families to promote their health and help them concentrate better for school work.

Debrework Lulseged, executive director of the Ethiopian NGO, said the project has also created job opportunities for unemployed women who prepare the meals and feed the children at the schools.

"This is a clear demonstration of how partnership with CFPA and friendship with China can work to synergize efforts to tackle livelihood burdens," she said.

The China Foundation for Peace and Development, another social organization, founded in 2011, has performed more than 70 international charitable projects in over 34 countries.

In June 2019, the foundation worked with Cambodia's Civil Society Alliance Forum to launch a project called Happy Spring, which solves shortages of drinking water for 172,000 people living in the Bati and Boreichulsa districts of Takeo Province.

Manuelle Hurwitz, a global director at the International Planned Parenthood Federation, or IPPF, expressed her gratitude to the Chinese government and NGOs, saying their support "enabled us to provide essential sexual and reproductive health and rights to people who need it the most".

The IPPF, established in 1952 in India, is a global nongovernmental organization working in the area of sexual and reproductive health and rights.

In China, the IPPF is working with the CFPA on a project on HIV prevention for migrant workers in urban areas and their family members left behind in rural areas.

"By providing people with knowledge and skills to prevent HIV transmission and look after their health and well-being, the project has made important contributions to improving people's health and livelihood; and thus contributed to poverty alleviation," Hurwitz said.