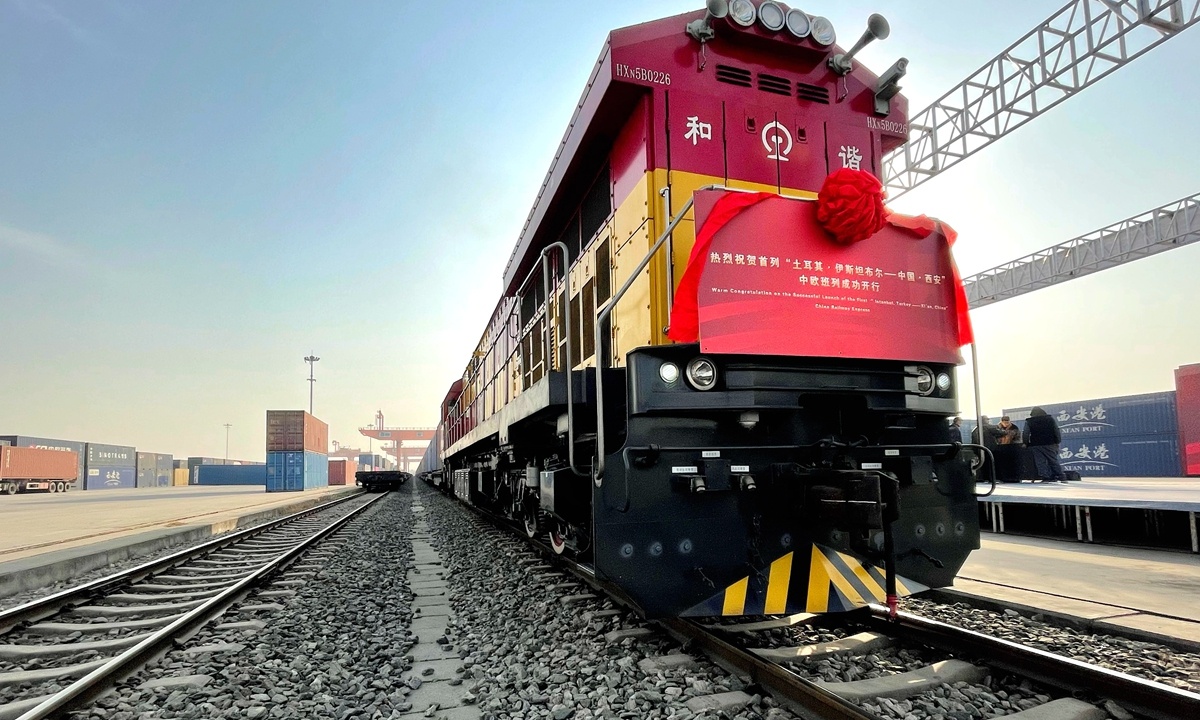 A China-Europe freight train stops in Xi'an, Northwest China's Shaanxi Province on Wednesday. The train is the first of its kind connecting Xi'an with Istanbul in Turkey, a link that is expected to cement trade and economic ties between the two countries. (Photo: CNSphoto)

China and the European Union (EU) are pushing for the inking of a comprehensive, balanced and high-level China-EU Bilateral Investment Agreement (BIT), also called Comprehensive Agreement on Investment (CAI), amid rising number of hurdles during the negotiation and the increasing pressure from third parties, such as the US, said Chinese observers.

They noted that although China has determined to push forward the inking of the deal, it is not blindfolded by the year-end deadline, and won’t yield to the bloc’s increasingly politicized environment, nor its up-the-ante moves during negotiations.

It’s been a bumpy road during seven years of negotiations since the two sides differ on various issues in terms of market access, intellectual property and other issues.

The latest information released by the Chinese Foreign Ministry spokesperson revealed that negotiations are continuing smoothly.

Yet, one inch to the end, as top leaders from both sides have vowed to wrap up the negotiation before US president-elect Joe Biden takes office in January 2021, new obstacles have emerged as the European side blatantly lays blame on China’s treatment of Uygurs and Biden’s camp adds pressure on the EU to hit the brakes on reaching a deal with China.

Chinese economists pointed out that joining hands with China, the only major economy to grow, will greatly stimulate the European economy, which has been hit hard by several waves of the viral outbreak. As China has released a slew of goodwill on the deal’s signing, the ball now is in the court of the European side, they said.

They noted that signing the deal will send a powerful signal that the two sides have chosen pragmatic cooperation over political differences, and inject much-needed energy into the world economy, which is facing difficulties brought about by the COVID-19 pandemic.

When asked about whether the negotiation can be settled within the year, China’s Ministry of Commerce said that China will remain committed to promoting high-level opening-up and will conduct negotiations based on its own pace and on the basis of protecting its security and development interests.

China is striving to reach a comprehensive, balanced and high-quality investment deal with the EU, said the ministry, noting that the deal will not only deepen bilateral economic cooperation, but also has great significance to world economic recovery.

When Chinese Premier Li Keqiang on Wednesday held phone conversations with Dutch Prime Minister Mark Rutte and Spanish Prime Minister Pedro Sanchez, he said that China is willing to work together with the EU for an early conclusion of the negotiations for the China-EU investment agreement.

It is the second positive signal released this week from Chinese high-level officials. On Monday, Chinese State Councilor and Foreign Minister Wang Yi, when meeting ambassadors from the 27 EU nations in Beijing, said that China and the European Union are likely to wrap up their investment deal soon.

Yet noises and pressures also come along with these positive signals, and many foreign media outlets have suspected that the two sides will not meet the year-end deadline as they still disagree on certain issues and face pressure from the US.

The two sides have long disagreed with each other on issues of market access, protection of state-owned enterprises and intellectual property, which has required rounds of negotiations to discuss, Li Gang, an associate professor at the Institute of European Studies under the Chinese Academy of Social Sciences, told the Global Times on Thursday.

Aside from disagreements between China and the EU on some clauses of the treaty itself, external disruptions such as the US’ influence on the EU and some EU politicians’ ideological prejudice against China obstruct the completion of EU-China CAI as planned, observers noted.

However, the report was rebuked by Wang Wenbin, spokesperson of China’s Ministry of Foreign Affairs, at a routine press conference on Thursday. Wang said that the report is fake news, and the negotiation of the CAI is going along smoothly at the moment.

At the same press conference, Wang also slammed French minister delegate for foreign trade’s opposition to the EU-China deal over alleged abuse of Uygurs. “Forced Uygurs labor in Xinjiang is a total lie. Such despicable actions should be condemned and held accountable,” said Wang.

In addition, some reported that there are voices within the EU demanding that the bloc refuses to acknowledge the deal unless China makes commitments on so-called forced labor issues in Xinjiang.

Li Gang said that China has released significant sincerity in reaching the deal, but it should not be interepreted as unconditional concenssion.

If the EU wants to weigh the deal in political terms, or expand the trade deal to political and ideological areas, there’s no room for negotiation, and it would show the EU side’s lack of sincerity in pushing forward the deal.

Sensing the deal will be signed soon, Jake Sullivan, Biden’s choice of national security adviser, wrote on Twitter on Monday that the new administration “would welcome early consultations with our European partners on our common concerns about China’s economic practices.”

Li Gang said the US is a disruptive factor to China-EU cooperation, as it sees the EU as its top priority in its worldwide effort to contain China’s Huawei equipment, and president-elect Joe Biden has stated he wants to strengthen ties with the European allies.

The US will create obstacles on the road of inking the deal; however, the EU, which is always holding pragmatic policies; that is, not leaning too much on one side, and prioritizes pragmatic ties over ideological ones, will make a choice that suits its best interests, said the expert.

China is not in a rush to ink the BIT with the European side amid an increasingly politicized environment in the bloc, which may stir up tensions and prompt the latter to up the price on the negotiating table, or may even deliberately delay the schedule, Cui Hongjian, director of the Department of European Studies at the China Institute of International Studies, told the Global Times on Thursday.

“The previous timetable to have a deal signed before the year-end just sets a course. China has the determination but is not blinded by the deadline. Both sides need to make concessions to make the deal happen,” Cui noted.

There is a chance that the BIT could be reached before China’s Spring Festival holidays, which fall in mid-February this year, if Europe could soften its stance, analysts said.

Also, if EU-China leaders’ meeting could resume next year, it is highly likely that the deal could be signed at that time, if not earlier, according to Cui.

Ball in the EU’s court

The South China Morning Post, also citing unnamed EU sources, reported last week that the EU has agreed “in principle” to the deal, after China made concessions on sectors such as financial services, manufacturing and real estate.

The trade accord will purportedly commit China to lifting foreign shareholding limits in the automobile and telecom sectors. It will also increase market access for EU firms in financial services such as banks, according to POLITICO, which cited J?rg Wuttke, president of the EU Chamber of Commerce in China, as saying.

The reported concessions by China point to EU firms’ interest in the Chinese market, where a push for greater opening-up means a bigger role for foreign businesses, experts said.

In the financial sector, China has ramped up the removal of foreign ownership bans this year, opening up its securities, fund management and futures sectors to foreign investors.

While there remains much work to be done, the latest breakthrough sends “a very powerful message that despite huge differences, the two sides can still — and have chosen to — pursue constructive pragmatic cooperation. That is a very rare thing these days,” Cui Hongjian, director of the Department of European Studies at the China Institute of International Studies, told the Global Times.

It is now time for European countries to discard wronged notions such as treating China only as a “competitor,” and join China to provide pragmatic insurance for companies from both sides on investment, Li urged.

With the deal’s endgame around the corner after years of tough bargaining, the two sides are set to embrace a much-needed boost for both economies amid an economic downturn made larger due to the ravaging COVID-19 pandemic and US-advocated protectionism and decoupling.

For China, the CAI would potentially bring a lot of EU capital into the Chinese market, while also expanding market access to the EU for Chinese businesses, at a time when the external environment continues to worsen for the Chinese economy amid growing tensions with the US, analysts said.

For the EU, the bloc’s economy remains under the dark cloud of COVID-19 and trade talks with the UK and the US are encountering difficulties.

With the CAI, both the EU and China would gain the upper hand in dealing with their own set of difficulties, and both sides want the deal to succeed for their own benefits.

Both need to make compromises to realize those benefits, said experts, noting that whether the year-end deadline is met relies largely on the EU side having complete sincerity.