Africa and China have supported each other and cooperated closely since COVID-19 broke out in early 2020, reflecting the long-lasting friendship during this hard time. African countries fully supported China's fight against the epidemic in the past months, as COVID-19 is currently spreading in Africa. China urgently supports African countries and shares its experience in combating this infectious disease.

A video conference on “Fighting Against COVID-19 and Africa-China Cooperation” was co-hosted by the Africa Institute of South Africa, the National Institute for Policy and Strategic Studies of Nigeria and the Institute of African Studies at Zhejiang Normal University on April 17, to accurately assess the African epidemic situation, strengthen solidarity, forge consensus and provide intellectual support for the two sides to cooperate in the battle against COVID-19. 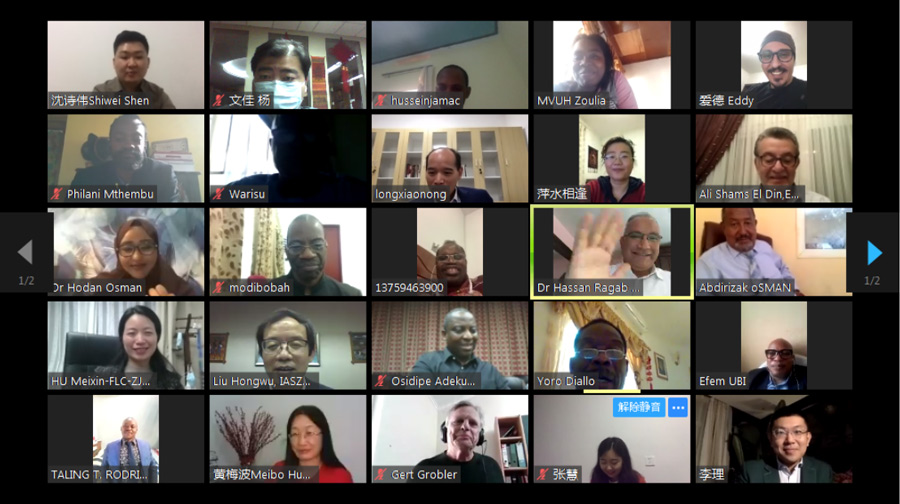 A screenshot of the video conference

A Joint Proposal on Africa and China Working Together to Fight Against COVID-19 was released online in six languages: Chinese, English, French, Arabic, Swahili and Hausa. More than 60 well-known scholars, think tank leaders and media representatives from China and 13 African countries attended the video conference.

The conference theme was Promoting the Governance Capacity to Fight Against Epidemics and Working to Build a Closer China-Africa Community with a Shared Future. The Chinese and African scholars present at the conference focused on three issues, namely “current situation and trends of the COVID-19 outbreak in Africa”, “deepening exchange and cooperation in public health between China and Africa” and “promoting governance capacity and spurring common development.” The in-depth discussions and candid exchanges gave way to many constructive suggestions for Africa-China cooperation to overcome the epidemic.

Liu Hongwu, dean of the Institute of African Studies at Zhejiang Normal University, and Cheryl Hendricks, dean of the Africa Institute of South Africa, delivered speeches at the opening ceremony. Liu pointed out, “Africa and China have long formed a community with a shared future, with close cooperation not only the source of the robust vitality for China-Africa development but also the key to stick together in the fight against the epidemic. This conference will further consolidate the consensus, expand communication channels, and contribute to Africa and China working together to fight against COVID-19.” Hendricks noted that the timing of this important conference is opportune and will unite the think tanks of China and Africa to provide strong mutual support to overcome the epidemic.

Representatives present expressed their belief that the China-Africa friendship is profound enough to withstand the test of the epidemic. China and Africa should further strengthen cooperation and exchanges in various fields such as public health governance and epidemic containment. The think tanks, scholars and media from all the countries involved should take the initiative to provide guidance and intellectual support to deepen international cooperation and work together to defeat the epidemic.

The proposal pointed out that Africa and China have worked together to help each other for the past decades. Their friendship has been deeply rooted in the hearts of the people of Africa and China, and has continued to grow in this joint effort to fight the epidemic. The two sides believe in "seeing the truth in adversity."

At this unique moment, the people of Africa and China need more mutual trust, deeper understanding, sincere solidarity, mutual support and cooperation. The proposal also provided specific suggestions on more effective cooperation between China and Africa in fighting the epidemic. It is said that the proposal will also be translated into Afrikaans, among other African native languages.