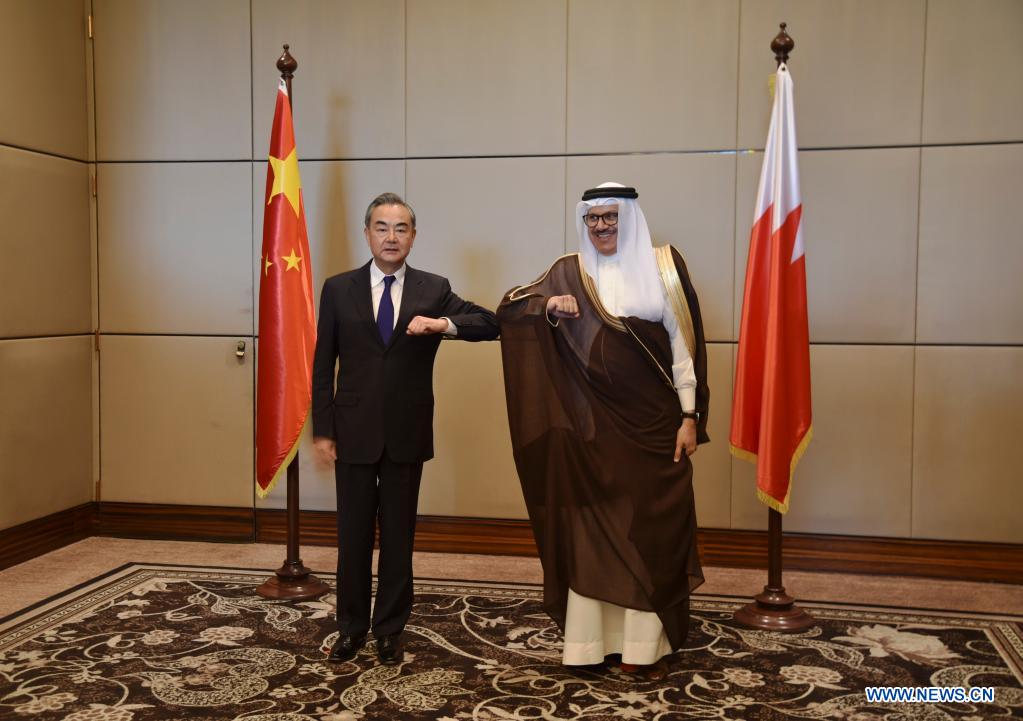 China and Bahrain share a profound traditional friendship, said Wang, noting that since the establishment of diplomatic ties, the two countries have always trusted and supported each other.

Noting that the international and regional situation is undergoing profound changes, Wang said that China is willing to be a long-term partner that Bahrain can trust and rely on, and work with the country to uphold the principle of non-interference in internal affairs, resist the politicization of human rights issues, and safeguard the legitimate rights and interests of the two countries, as well as the development right of developing countries.

Wang also said that China is ready to work with Bahrain to enhance the synergy between the Belt and Road Initiative and Bahrain's Economic Vision 2030, deepen cooperation in such areas as energy, infrastructure, 5G mobile communications, e-commerce and big data, expand cooperation scope and space, and support the efforts of Bahrain to promote economic diversification.

Today, China and the Arab League expressed a common voice on the issue of digital economy governance with the signing of the China-Arab Data Security Cooperation Initiative, Wang said, adding that China is ready to work with Bahrain to combat all forms of terrorism, and especially to eradicate the breeding ground of terrorism through de-radicalization.

Wang stressed that China is willing to strengthen coordination and cooperation with Bahrain in regional and international affairs to promote more balanced and stable international relations.

China has no selfish interests in the Middle East and will not engage in the geopolitical competition in the region, he said, adding that it is hoped that Middle East countries could view and handle regional issues in the spirit of being masters of the place.

As long as Middle East countries adhere to mutual understanding, mutual support and mutual inclusiveness, solutions can be found to any issue, Wang stressed, noting that as a good friend and partner of Middle East countries, China is ready to continue to play a constructive role in this regard.

China is also willing to work with Arab countries including Bahrain to make preparations for the China-Arab summit, promote the early conclusion of the free trade zone talks between China and the Gulf Cooperation Council (GCC), and lift China-Arab relations to a new level, Wang added.

Al Zayani said at a time when the region is facing difficulties, especially amid the fight against the epidemic, the Chinese foreign minister's visit to the Middle East demonstrates the great importance China attaches to Middle East affairs and regional security and stability, as well as the sincere friendship between Bahrain and China.

Bahrain firmly adheres to the one-China principle, supports China in safeguarding its sovereignty and opposes politicizing human rights issues, Al Zayani said, stressing that the Human Rights Council should not become a platform for interfering in other countries' internal affairs.

He pointed out that the two countries should enhance the synergy between Bahrain's Economic Vision 2030 and the China-proposed Belt and Road Initiative, expand bilateral cooperation in trade, investment, energy, science and technology, infrastructure and other areas, and further deepen Arab-China relations in the post-epidemic era.

Noting that Bahrain attaches great importance to safeguarding the safety and health of Chinese nationals in the country, Al Zayani said Bahrain will continue to provide necessary support and assistance.

Bahrain appreciates China's five-point initiative on realizing security and stability in the Middle East and is willing to keep close coordination and cooperation with China in regional and international affairs, deepen cooperation in combating terrorism and eliminating the root causes of terrorism, and jointly safeguard regional peace and security, Al Zayani said.

Bahrain supports the holding of the Arab-China summit and speaks highly of the Arab-China Data Security Cooperation Initiative proposed by China, he added, noting that the country is willing to work with China to push for the establishment of the GCC-China free trade zone at an early date.