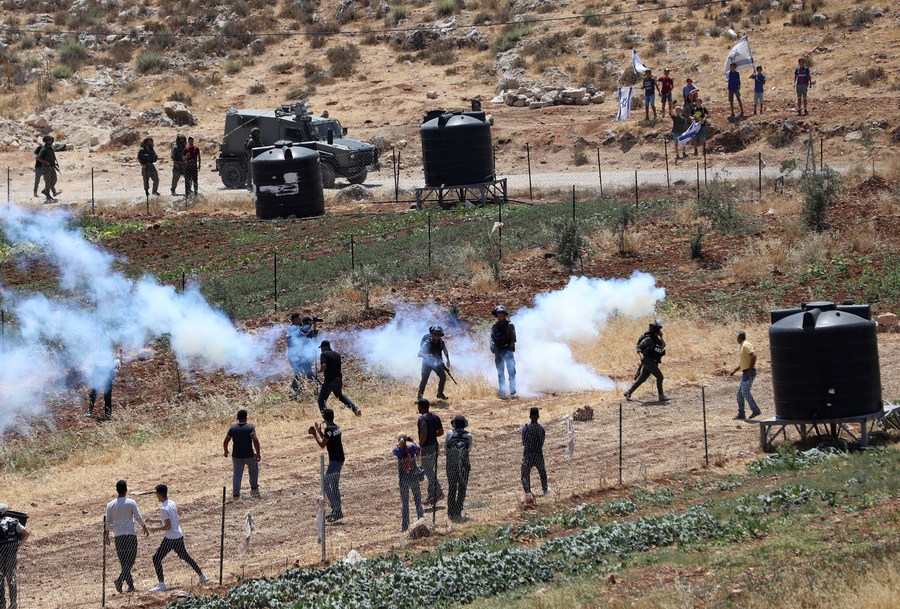 Palestinian protesters clash with Israeli soldiers and members of Israeli border police following a protest against the expansion of Jewish settlements in the West Bank village of Qaryut, south of Nablus, on June 24, 2022. （Photo：Xinhua）

UNITED NATIONS, June 27 (Xinhua) -- A Chinese envoy on Monday voiced deep concern over the deteriorating situation in the occupied Palestinian territory, and called on the international community to take urgent and decisive actions to prevent the Palestinian-Israeli issue from being totally derailed.

It is concerning that the continued expansion of Israeli settlements "has encroached upon Palestinian land and natural resources, undermines the right of the Palestinian people to self-determination," Zhang Jun, China's permanent representative to the United Nations, told a Security Council briefing on the situation in the Middle East, including the Palestinian question.

"Every brutal inch of expansion of settlement is making the prospect of a two-state solution much harder to achieve. We urge Israel to stop its contempt for Resolution 2334, stop all settlement activities, and stop further undermining the foundation for the two-state solution," Zhang said.

Noting that recently the security situation in the occupied territory has continued to be volatile, Zhang said China strongly condemns the continued violence by Israeli security forces and the settlers, which has resulted in heavy Palestinian casualties, including children.

The envoy urged Israel to launch as soon as possible a criminal investigation into the killing of Al Jazeera journalist Shireen Abu Akleh, and release its findings in order to ensure accountability.

"The question of Palestine is a litmus test of the international justice and fairness," Zhang said, stressing that piecemeal crisis management cannot substitute for a comprehensive and just settlement.

He added that limited economic and humanitarian measures cannot erase political and security deficit, and individual national policies cannot replace long established international consensus and multilateral process, including resolutions adopted by the Security Council and the General Assembly one after another.

"What is needed for the time being is urgent and decisive actions, so as to prevent the train of Palestinian-Israeli situation from totally falling off the track," he said.

Zhang said that China calls upon the international community, especially those having key influence on the parties concerned, to make genuine efforts for the peace process in the Middle East.

This would mean promoting the two-state solution with the utmost urgency, he said, rather than waiting for so-called conditions for dialogue to mature.

"This would mean adhering to the concept of indivisibility of security, giving equal importance to the security concerns of both Palestine and Israel, rather than allowing tacitly that the security of one side be built on the insecurity of the other," he said.

"This also means persevering in a responsible attitude, rather than allowing policy flip-flop to further complicate the peace process," he said, emphasizing that it also means to ditch the double standard and uphold an objective and impartial position, rather than being engaged in long-term practice of setting roadblocks for the Security Council's handling of the Palestinian-Israeli question.

As a responsible member of the international community, China will be always on the side of peace and justice, on the side of human conscience and fairness, and on the right side of history, he said.

"We will firmly support the just cause of the Palestinian people to restore their legitimate national rights, and will continue to make unremitting efforts for achieving comprehensive, just, and lasting peace in the Middle East," said Zhang. ■