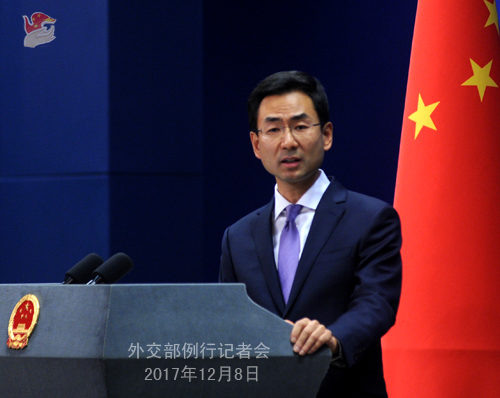 BEIJING, Dec. 8 (Xinhua) -- Both China and Canada showed willingness to negotiate and sign a free trade agreement (FTA) during Canadian Prime Minister Justin Trudeau's recent visit, a Chinese Foreign Ministry spokesperson said Friday.Geng Shuang told a daily news briefing that China and Canada had in-depth negotiations on the FTA during Trudeau's visit. They agreed to promote economic globalization, safeguard trade and investment liberalization and facilitation, work jointly to promote the construction of a free trade area, and create conditions for the early start of relevant talks.Trudeau paid an official visit to China from Dec. 3 to 7, and exchanged views with Chinese leaders on issues of common concern, Geng said.He said the two sides agreed to deepen practical cooperation on trade, investment, clean technology, and aerospace, as well as expand people-to-people exchanges in tourism, education and culture.They also agreed to enhance coordination in international and regional issues and work jointly to tackle the climate change, he added. (   China stands ready to work with Canada to implement the consensus reached by the leaders of the two countries on the basis of mutual respect, equal treatment and mutual benefits so as to further promote the bilateral strategic partnership, Geng said.