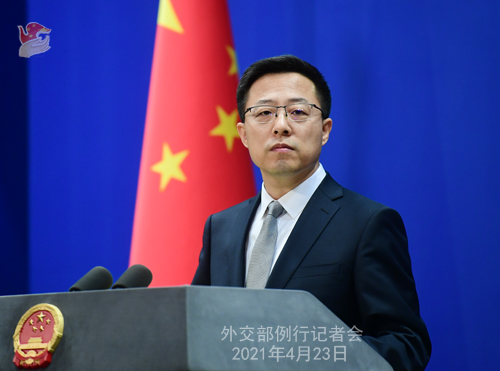 BEIJING -- A Chinese spokesperson on Friday denounced Japan's recent remarks on the Diaoyu Islands and Taiwan as "completely reckless" and "highly irresponsible," urging Japan to reflect on itself and refrain from going further down the wrong path.

Speaking of China's activities around the Diaoyu Islands, Japanese Defense Minister Nobuo Kishi reportedly said that China is invading in a subtle way, step by step. He also talked about the Taiwan question.

In response, Chinese Foreign Ministry spokesperson Zhao Lijian said at a daily press briefing that China always adheres to the path of peaceful development and firmly pursues a national defense policy that is defensive in nature.

The Japanese side should stop talking nonsense about China's development and misleading the public, said the spokesperson.

The Diaoyu Island and its affiliated islands are an inherent part of China's territory, Zhao said, adding that China's patrols and law-enforcement activities in waters off the Diaoyu Island are an exercise of its inherent rights.

Zhao said the Taiwan question is a purely internal affair of China. "China will never allow any country to interfere in any way," he said.

The erroneous statements of some Japanese people in relation to Taiwan fully expose their sinister thinking, that they do not want to see the peaceful reunification of China and will do everything possible to obstruct that great cause, according to Zhao. "China must and will be reunified. The Japanese side should never harbor any illusion with ulterior motives," he said.

Japan has staged various political farces, one after another, to deny and whitewash its history of aggression and expansion in Asia, Zhao said. Certain Japanese politicians wantonly smear China, turning a blind eye to their own deplorable deeds.

"The world should be on high alert as to their real intentions," the spokesperson said. He urged Japan to reflect on itself, immediately stop slinging mud at China and refrain from going further down the wrong path.