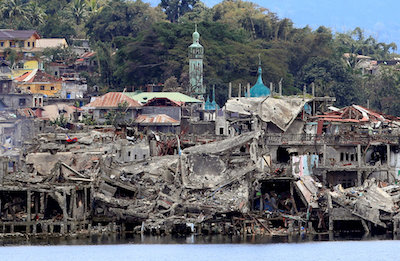 MANILA, Oct. 24 (Xinhua) -- The Philippines thanked China on Tuesday for donating 47 sets of heavy equipment to help rebuild the devastated southern Philippine city of Marawi.
Chinese Ambassador to the Philippines Zhao Jianhua formally handed over the dump trucks, cement mixers, excavators and bulldozers valued at 20 million renminbi or around 3 million U.S. dollars.
Now that Philippines authorities already declared victory in Marawi against terrorists, Zhao said the government can start the reconstruction and rehabilitation process.
"We believe that under the Duterte administration, Marawi City can reborn as new," Zhao said, adding that China will be "a sincere friend and partner of the Philippines."
Philippine Defense Secretary Delfin Lorenzana and Philippine Finance Secretary Carlos Dominguez expressed their gratitude to China on other occasions.
Dominguez said the equipment will be tentatively held at the Iligan Port in Iligan City later this month.
Zhao turned over the equipment to the Department of Public Works and Highways (DPWH) during a simple ceremony in Manila. DPWH is tasked to oversee the use of equipment.
Dominguez said the end of the Marawi conflict will further boost investors' confidence in the economy, and that the government can focus on a comprehensive plan to reconstruct Marawi and provide economic opportunities for its returning residents.
The five-month conflict in Marawi that broke out in May has killed more than 1,200 people, including 165 soldiers and policemen. The war also ruined the city, displacing thousands of residents.