CAIRO, Nov. 17 (Xinhua) -- As Egypt works steadily over the past few years to develop the Suez Canal Corridor to generate new revenues, China has become the largest investor in the development of Egypt's megaproject. 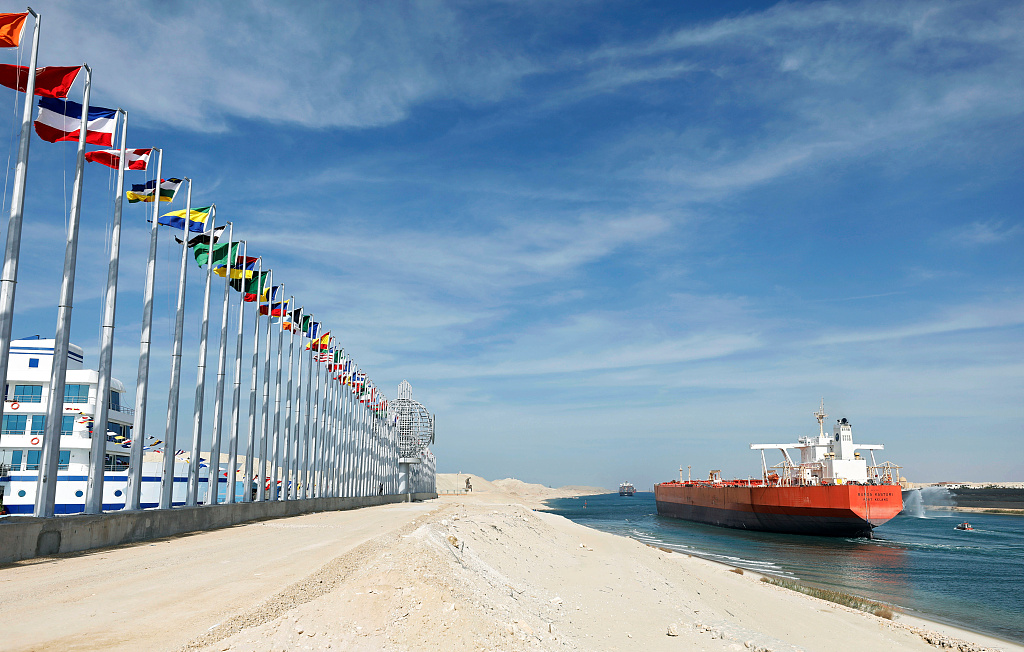 Being a major source of hard currency in Egypt, along with the revenues of tourism and foreign investments, the 150-year-old Suez Canal has always been given the complete focus of the Egyptian government throughout its history by adopting a series of developmental projects in the waterway.

The Egyptian official told a celebration that 1.3 million vessels have transited the Suez Canal since its inauguration, with 28.6 billion tons of cargo, and generating revenues amounting to 135.9 billion U.S. dollars.

These achievements have prompted Egypt, under the leadership of President Abdel Fattah al-Sisi, to launch in 2014 the Suez Canal Corridor Area Project, which is a megaproject aimed at increasing the role of the Suez Canal region in international trading.

As the China-propsed Belt and Road Initiative (BRI) continues to provide development momentum for Egypt, President Sisi stressed that the Suez Canal Corridor was the suitable area for Sino-Egyptian cooperation.

"Chinese companies have been pioneering the development of Egypt's Suez Canal Economic Zone (SCZone), while further contracts with giant Chinese companies of heavy industries are expected to be announced soon," newly-appointed Chairman of the SCZone Yehia Zaki told Xinhua in a recent interview.

Zaki added that negotiations are currently underway with giant Chinese companies working in steel and other heavy industries to operate in the SCZone, a world-class free zone and trade hub along the banks of the newly-expanded Suez Canal.

"There are promising investment opportunities in the SCZone and a growing desire of Chinese companies to invest here and be present at the Egyptian market," the Egyptian official revealed.

The best example of cooperation between Egypt and China at the Suez Canal Corridor is China-Egypt TEDA Suez Economic and Trade Cooperation Zone, which is a Chinese national overseas economic and trade cooperation zone approved by the Chinese government.

With the support of the two countries, the TEDA cooperation zone has become an important platform for China-Egypt economic and trade cooperation.

The TEDA cooperation zone near the Suez Canal was officially launched in 2008 with an area of 1.34 square kilometers for its first phase.

During his state visit to Egypt in 2016, Chinese President Xi Jinping and Egyptian President Sisi jointly unveiled the nameplate of the expansion area project of the TEDA cooperation zone, covering an area of six square kilometers.

"Egypt is located at the border of Asia, Africa, and Europe and has established friendly relations with China. With the deepening of the BRI and the development plan of Egypt's Suez Canal Corridor, the establishment of a Chinese overseas economic and trade cooperation zone in Egypt will strengthen and deepen the capacity cooperation between the two countries, which has a profound significance," Wu Lixing, management director of the TEDA cooperation zone, told Xinhua.

She added that the Chinese government has included Egypt as one of the countries that are suitable for building Chinese overseas economic and trade cooperation zones.

The six-square-km expansion area project of the TEDA cooperation zone is expected to attract about 150-180 enterprises with investments of 2 billion U.S. dollars, Wu said.

The Suez Canal remained under the control of England and France until late Egyptian President Gamal Abdel Nasser, who led a revolution to end monarchy in Egypt in 1952, nationalized it in 1956. It has since been operated by the Suez Canal Authority.

"In November 1956, people from all walks of life in Beijing held a rally in the Tiananmen Square to support Egypt in safeguarding national sovereignty and to nationalize the Suez Canal," Chinese Ambassador to Egypt Liao Liqiang told Xinhua.

Since the establishment of diplomatic ties 63 years ago, China and Egypt have enjoyed mutual respect, mutual trust and mutual support, and have withstood the test of international and regional changes, he said.

"The concepts of cooperation, win-win, co-construction and sharing advocated by China's BRI are in line with Egypt's development needs and have received positive response from Egypt," the ambassador said.

"Chinese enterprises are actively involved in the construction of major national strategies in Egypt, including the development of the Suez Canal Economic Zone," he added.