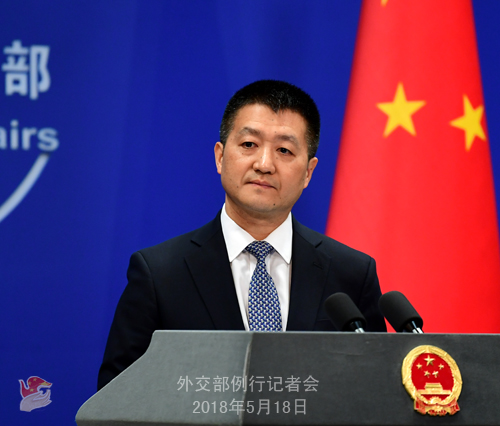 China said Friday that it will continue to encourage the United States and the Democratic People's Republic of Korea (DPRK) to build mutual trust,  and make joint efforts to promote  the political resolution of the Korean Peninsula issue.

Foreign Ministry spokesperson Lu Kang made the remarks at a news briefing when responding a question on media report that said US President Donald Trump on Thursday ruled out the use of the so-called "Libya model" in efforts to pursue denuclearization of the Korean Peninsula, saying the DPRK could get "protections that will be very strong" if its leader agrees denuclearization.

Lu said that China welcomes the United States paying attention to and is willing to resolve the security concerns of the DPRK.

The essence of the Korean Peninsula issue is security, Lu said, adding that the concerns of all relevant parties should be settled in a balanced way, including the DPRK's legitimate security concerns.

China advocates that a political resolution of the Korean Peninsula issue should be promoted stage by stage with concerted efforts from all relevant parties to seek a package of solutions, Lu said.

"At every stage, all relevant parties  should bear their corresponding responsibilities and undertake their related obligations," he said.

China will continue to encourage the United States and the DPRK to move in a positive direction, build mutual trust, resolve their respective concerns through consultations, and make joint efforts to promote the political resolution of the Korean Peninsula issue, Lu said.